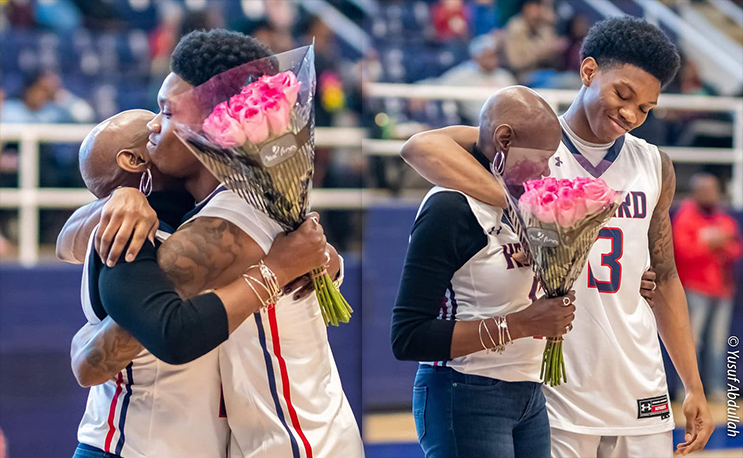 Breast cancer has kept Michelle Watts from seeing her son C.J. Williams play as much as she would like. Saturday she surprised him.

Basketball programs all over the country celebrated “Coaches vs. Cancer” this weekend, including Howard University.

Junior guard C.J. Williams, a preseason All-MEAC pick, had a helluva game with 29 points in the win. Always a talented performer, he had extra reason to play well on Saturday night as his mother got the chance to see him play for the first time this season.

Michelle Watts, Williams’ mother, has been battling cancer. Her treatments have left her unable to get to games as regularly as she has in his first couple of seasons at Howard. But HU coach Kevin Nickelberry asked if she would make the trip from Virginia secretly.

Watts managed to keep the secret all the way up I-95 to Howard’s campus and into Burr Gymnasium. Williams didn’t know his mother was there until she walked out to midcourt during a pregame presentation. The two shared a long embrace as he gave his mother the flowers.

“He did not know his mother was coming today,” Nickelberry continued. “Playing in front of his mother for the first time in awhile created some emotions for him. That got CJ [Charles Williams] ready, which is something we needed.”

Not that Williams hasn’t been performing all season. He came into the game second in the MEAC scoring race (18.9), just behind teammate RJ Cole who put up 20 in the win. Keep an eye on the athletic junior out of Richmond who took just over two seasons to score 1,000 career points.

More importantly, though, our thoughts and prayers are with Watts as she continues her battle, and all others dealing with this disease.