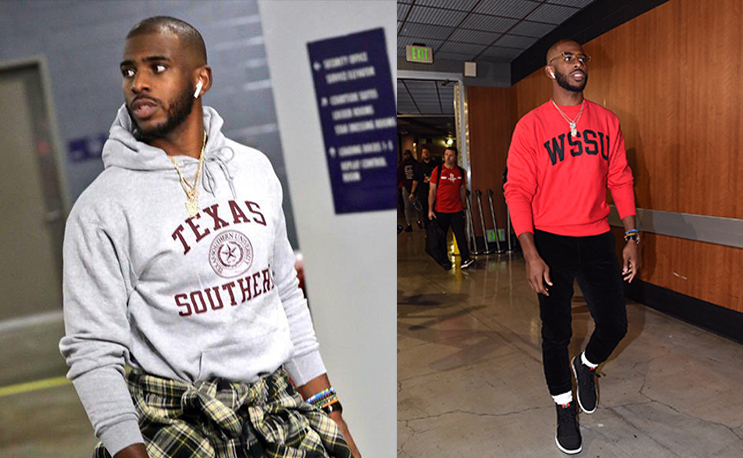 Chris Paul has been all in the headlines the first week of the NBA season for not-so-great reasons. The Houston Rockets point guard was involved in a multi-player scuffle with the Los Angeles Lakers on Saturday that resulted in multiple game suspensions for several players, including himself.

Before the game, however, Paul created a buzz in the HBCU community by wearing a Winston-Salem State sweater into the Staples Center before the game. That came just days after he arrived at his team’s home opener rocking a Texas Southern sweatshirt to that game.

Paul, a native of Winston-Salem, attended Wake Forest University but has strong ties to WSSU and believes in HBCUs.

“It’s special. Texas Southern we did an event with them last year,” Paul told Fox 26. “HBCUs mean alot to me. I’m probably one of the only people in my family that didn’t go to an HBCU.”

Chris Paul (@CP3) wore a @TexasSouthern @TXSOTigers shirt before #Rockets opening night: "It's cool. Texas Southern,we did an event w/ them last year. HBCUs (historically black colleges/univ) mean a lot to me.I'm probably 1 of the only people n my family that didn't go to a HBCU" pic.twitter.com/o9zCBtDhuD

Over the past few years we’ve seen celebrities wearing HBCU gear, and it has been great. But the question has always been: What is (insert your celebrity) doing for the school? Well, Paul has the stats to back it up.

During the 2011 NBA Lockout, Paul held a charity basketball game with a roster full of current NBA stars and future Hall of Fame players. LeBron James, Carmelo Anthony, Kevin Durant, Dwyane Wade and just about every other relevant pro in the NBA at the time put on a show for a capacity crowd at the C. E. Gaines Center on WSSU’s campus. (Rondo was not a part of the party, by the way.)

Not only did the game give WSSU a HUGE spotlight, Paul also donated $25,000 to WSSU athletics.

Paul isn’t the only Rocket who has come out of the checkbook for an HBCU. His teammate and reigning MVP James Harden recently designated $100k to Texas Southern for the second year in a row.

“That’s amazing, given the population of students we serve who come from what I consider to be one of the lowest socioeconomic backgrounds in the city,” TSU president Dr. Austin Lane said. “To have that kind of opportunity from someone like James Harden, who can help further the educational careers of those students and help their dreams come true, it’s just phenomenal to have that kind of support from a local icon like him.”

There’s t-shirt wearing advocacy, which is cool and brings attention to the HBCUs. But both Paul and Harden have shown a willingness to invest in institutions they, themselves did not attend. Hopefully, other NBA stars will continue to pick up on the trend, as many of them have ties to HBCUs.