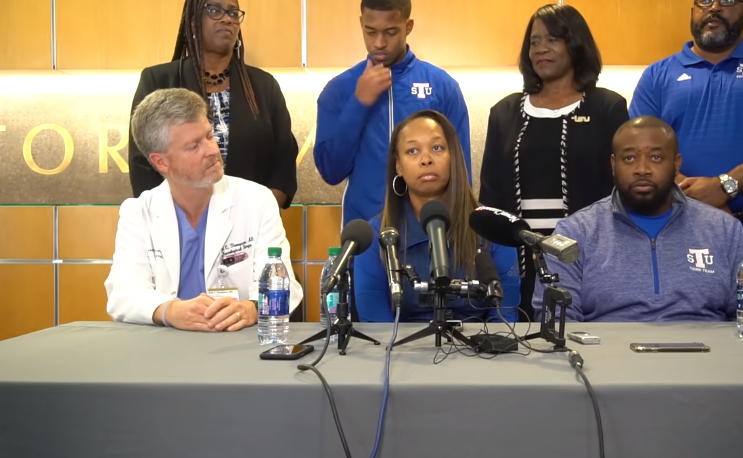 It’s been a trying week for the family of Tennessee State’s Christion Abercrombie, but they are standing strong and believing for a miracle.

“We are thankful because we know that Christion has a very, very strong faith in God,” his mother, Staci, told reporters on Wednesday. “Christion is fighting, so therefore as a family, we’re fighting, we’re supporting him. We’re standing strong in our faith. We’re not wavering. We’re trusting God, and we’re trusting God for a miracle.”

The TSU linebacker remains in critical condition after being rushed to Vanderbilt University Medical Center during a game between the two schools with a head injury. He is currently in a specialized, neurological ICU.

His mother said he has responded to gospel music being played in his hospital room. Dr. Reid Johnson declined to elaborate on the specific nature of Abercrombie’s injury, but did express that his condition is very rare.

A Fighter From Birth

Staci Abercrombie said her son has been fighting the odds since he arrived on July 4, 1998. Born at 28 weeks, he spent the first five weeks of his life in the hospital on a ventilator.

“He fought and he fought. And we see him today, and he is still fighting. And because we know that he’s fighting, we’re fighting.”

The Abercrombies were in Nashville for the game, driving up from Atlanta like they normally do. His mother said Saturday was strangely peaceful, as neither she nor her husband observed anything out of the ordinary. It was only when she checked her phone that she realized something was going on.

My phone was blowing up, asking me if Christion was okay, they’re saying pray for Christion,” Staci Abercrombie said.

Christion was examined by a neurologist on the sideline who called the neurosurgeon who was on his way before he had a CAT scan.

“There was no time-lapse. It was immediate. It was exactly what he said: emergency surgery. There was no downtime.”

Both Staci and Christion’s father, Derrick, say that despite the severity of their son’s injury, they have no ill feelings toward the game of football.

“The game of football…accidents happen, but God is still in control, “ Staci said. “Accidents are going to happen, but we still serve the same God.”

The Abercrombies remain optimistic but knew that the road to recovery will be a long one for their son.

“We take it. We listen. We respect the doctors. We have the most trust in them,” Staci said. “We are very proud of the service and the care that they have given our son. But we’re praying for them as well.

Dr. Johnson told the Abercrombies that their faith has been a source of inspiration for those working on their son.

“You have helped the doctors and nurses here,” he said. “You have inspired us with your courage and your strength. And that, we draw energy from.”

Earlier in the week, the NCAA made unwanted headlines when Abercrombie’s eligibility became a concern as multiple crowd-funding efforts in his name were created. TSU’s crowdfunding effort is the official one, and it has received a contribution from former student-athletes turned professional athletes.

“We are praying for a full recovery for our Tennessee State brother, Christion,” says Williams.

TSU head coach Rod Reed was on hand for the press conference as well. He said that the team is dealing with Abercrombie’s condition as best it can.

“It’s tough but our kids are resilient,” he said. “We try to update them as best as possible without divulging too much private information, but most of our kids know because 8 to 10 of them are up here every day visiting with the family.”

Less importantly, his presence is already being missed on the field in practice.

“Defensively, AB was our guy out on the field who made all the checks and we depended on him to do a lot of things, so we were a little bit sloppy yesterday. I told his dad it may have been our worst defensive practice.”