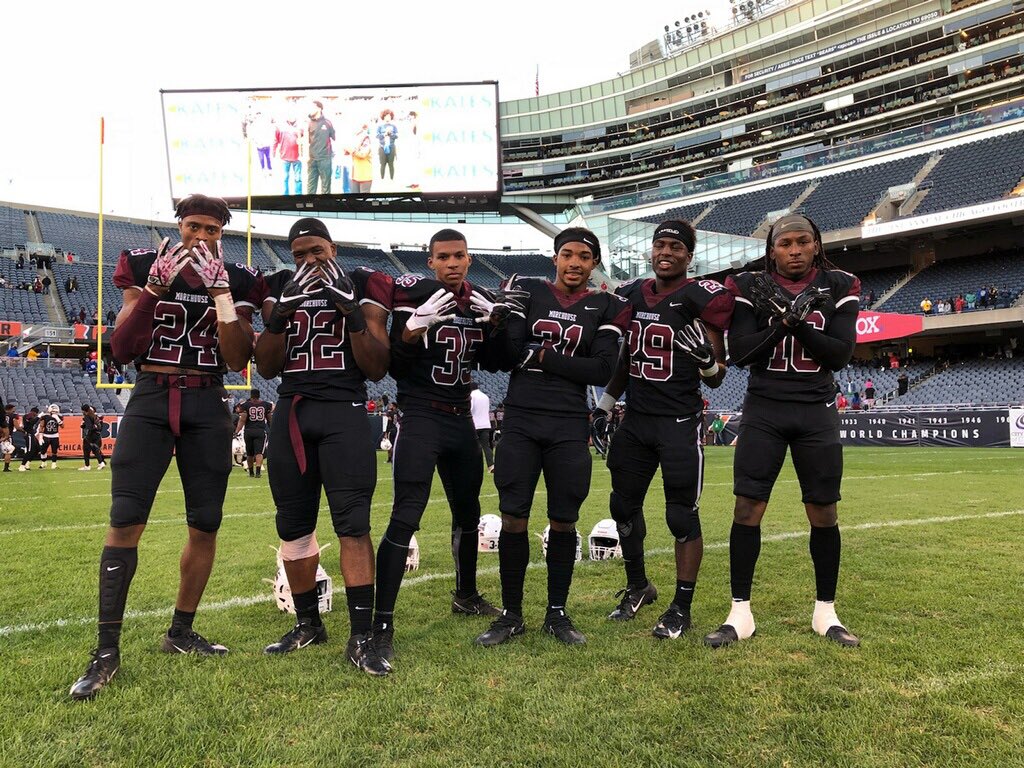 Morehouse has played with fire but managed to come out of the first half of the season without a mark.

Hello October. Every year you seduce us with the allure of Homecoming Season and all the trappings that come along with it. You also bring in the sobering reminder that we are at the halfway point of the football season. Be still, our football hearts, because we want this thing to last as long as it can.

Seriously, though, we’re in mid-season now, but there still remains a lot we don’t know. It doesn’t help that some teams have played just three games while others already have six under their belt.

Morehouse started the season with a mildly surprising upset of Arkansas-Pine Bluff and has kept its season unblemished so far, despite close calls in three of the five games. With the exception of blowout wins at Lane and over Central State at home, all of its wins have come by four points or less, including back-to-back 23-21 wins over Miles and Kentucky State.

Quarterback Michael Sims has been solid and at times spectacular (60 percent completion rate, 9 touchdown passes) which always helps. The Maroon Tigers are also getting a great season from running back Santo Dunn, who has rushed for 522 yards and seven touchdowns while averaging nearly seven yards per carry.

Morehouse will get a big test this weekend as it takes on perennial SIAC power Tuskegee for a game that could be a preview of the SIAC Championship Game.

Bowie State came into the season as the favorite to finally claim the CIAA crown in 2018. Armed with defending all-everything quarterback Amir Hall, BSU has gotten off to a solid start considering its only loss has come to an FCS team and it played the first month of the season on the road.

While Hall has been Hall for the most part (although he has thrown as many picks in the last two weeks as he did all season last year), the question is whether the talent around him can consistently elevate himself. Hall’s completion percentage could be a lot higher if his receivers actually hung on to the ball and the defense has shown that it can be gassed at times too, giving up better than 35 points in each of its first three games. This week it faces a Chowan team that can put up points and yardage.

After seeing Bowie State and Virginia Union in back-to-back games against the same opponent (Winston-Salem State), I could argue to swap the two teams. In fact, VUU might have the more complete team. The backfield combo of quarterback Darius Taylor and running back Tobias Taylor is a tough tandem to contend with. Its defense has been equally solid, and has size and speed that can give anyone in the CIAA fits.

While Bowie State has been the favorite and Virginia Union (perhaps) a surprise under first-year coach Dr. Alvin Parker, VSU is still the defending CIAA Champion and it has looked the part its first two conference games. After a relatively easy win over Johnson C. Smith in Week Four ,it picked up a solid win over a Shaw team expected to contend in the CIAA Southern Division.

It’s unusual to see Tuskegee so low on this list, but its offense is hit-or-miss. Case-in-point, last week’s win over Lane. Morehouse dominated LC while Tuskegee’s offense stalled enough to let them hang around and keep it close late. ‘Skegee is scoring just 17 points per game, and even in the SIAC, that’s not winning football.

The offensive inefficiency starts not with the passing game, as backup Ahmad Deramus has put up solid numbers since stepping up for Jamarcus Ezell, but with the running game. After grounding and pounding against Alabama State the run game has gotten WORSE against D2 competition, averaging just 3 yards per carry.

On The Bubble: Fayetteville State