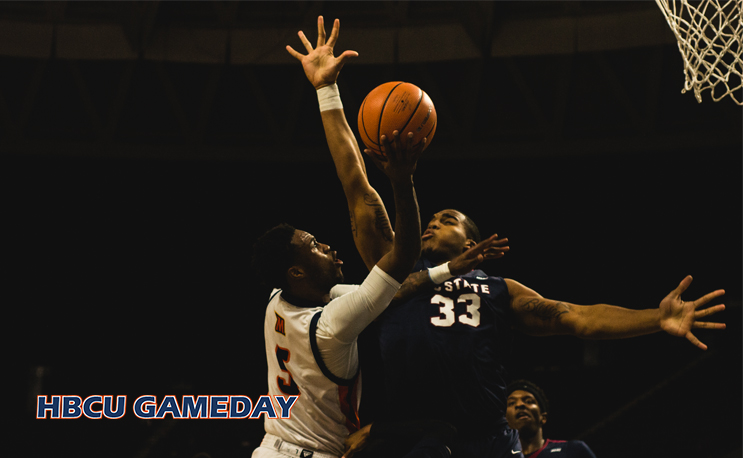 Tuesday welcomed the second day of opening rounds in the 2018 MEAC Tournament. The five games played concluded in favor of the top-seeded opponent in all games but one in both men’s and women’s competition.

In women’s hoops, 9th seed South Carolina State and 7th seed University of Maryland Eastern Shore fought to continue their seasons into the quarterfinal round. SC State upset 8th seed North Carolina Central, 76-67, and will play 1st seed North Carolina A&T Wednesday at noon. University of Maryland Eastern Shore came back from trailing at the half and won 77-60 over Delaware State, moving them ahead to face 2nd seed Bethune-Cookman Wednesday at 2PM, or 30 minutes following the conclusion of the SC State and NC A&T matchup.

Wednesday is the beginning of quarterfinal play, with it continuing into Thursday with four games slated for each day.

Women’s hoops will kick off the day at noon with NC A&T against SC State. A&T won over State in the regular season matchup. The winner of this game moves on to play the winner of FAMU and Savannah State on Friday at noon in the semifinals.
Following after will be UMES and Bethune-Cookman around 2 PM. Cookman won both regular season match-ups over Eastern Shore. The winner advances to play the winner of Hampton and Morgan State in semifinal play on Friday at 2 PM.

Men’s hoops will start with Hampton and FAMU at 6 PM. FAMU was victorious over Hampton during the regular season. The winner of this game will meet the winner of NC A&T and Norfolk State on Friday in the semifinals at 6 PM.
The day will conclude with Bethune-Cookman and Morgan at 8 PM. Cookman won their sole regular season matchup. The winner continues on to play Savannah State or North Carolina Central in the semifinals on Friday night at 8 PM.