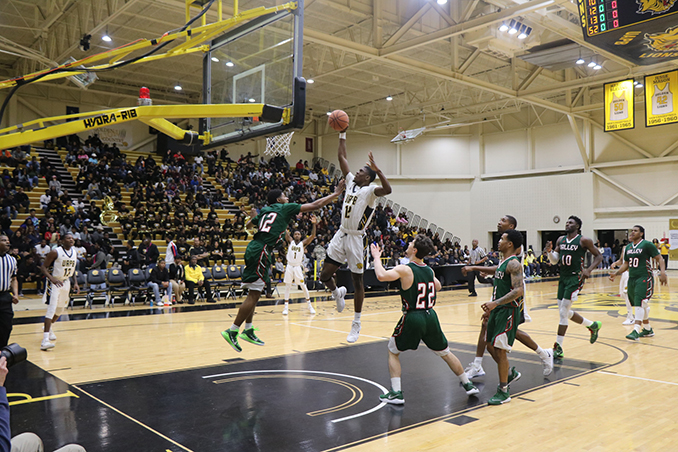 Men and women ready to move on to Houston to decide the champion.

PINE BLUFF, ARK. – Quamari Hardy completed an old-fashioned 3-point play with 2:32 remaining to give the top-seeded Golden Lions the lead for good and Travon Harper scored his team’s last four points as UAPB outscored the Delta Devils 10-6 down the stretch to outlast a pesky upset bid visiting Mississippi Valley State at the H.O. Clemmons Arena on Tuesday night.

But four Golden Lions scored in double figures including SWAC Player of the Year Martaveous McKnight, who finished with 16 points, seven assists, four rebounds, two steals and a blocked shot. UAPB also benefitted from 27 points that came off turnovers.

Hardy came off the bench and provided quality minutes by knocking down 5-of-9 from the field including 3-of- 5 from 3-point range to close with 16 points. Steen, who was named the SWAC Defensive Player of the Year, had 14 points with a pair of steals and blocks. Harper had 11 points, three blocks and two steals.

Evans led the Delta Devils with 20 points, Dante Scott added 14 points and Ejeh added 12 points and eight rebounds. Arkansas-Pine Bluff advances to play #4 Southern in the semifinals at Delmar Fieldhouse in Houston on Friday at 2:30 p.m.

All-SWAC First Team selection Jared Sam had 12 points and five rebounds. Southern shot 50 percent from the floor as a team in the second half after shooting just .375 in the opening half as it trailed by four at the break.

Southern advances to play #1 Arkansas-Pine Bluff at Delmar Fieldhouse in Houston on Friday at 2:30 p.m. in SWAC Tournament semifinal.

The Panthers led by as many as 13 in the first half before Alcorn (11-21) erased the advantage early in the second half and took a one-point lead at 45-44 less than four minutes into the second half.

Following the last tie at 47-all with 15:32 remaining, PVAMU outscored the Braves 40-24. A layup by Wallace put the Panthers up for good, 49-47, with under 15 minutes remaining. The lead eventually grew to double digits, as a three-pointer by Thompson, who tied a career-high with five three-pointers for the second time in three games, pushed the Panther lead to 67-56 with 7:15 remaining. Following an Alcorn basket, a Jones three-pointer pushed the lead back to double-digits at 70-58 with just 6:32 remaining.

HOUSTON, TX. – The host Tigers’ sizzling second-half shooting performance opened it up as Texas Southern made 65 percent of their shots from the field to ease past the visiting Hornets at the H&PE Arena in a quarterfinal matchup on Tuesday night.

Tied at 44 with 16:26 remaining, TSU (13-19) went on a quick strike 14-0 run in a little over a two-minute span to take control of the game. Marquis Salmon began the run with a pair of free throws and Derrick Bruce and Demontrae Jefferson each followed with a 3-pointer.

Donte Clark scored on a lay-in and then Clark completed a four-point play on a 3-pointer made with a free throw to make it 58-44 with 14:10 left in regulation.

Clark shot 7-of-11 from the field including 3-of-3 from 3-point range and 13-of-16 at the charity stripe to notch a team-high 30 points and five rebounds while playing the full 40 minutes.

Texas Southern will advance to play #2 Prairie View A&M at the Delmar Fieldhouse in Houston on Friday at 8:30 p.m. in a semifinal matchup.

For the third time this season and second time in the last three games, all five Panther starters were in double figures. Gary Blackston scored a game-high 21 points, Troy Thompson scored 18 points, and Zachary Hamilton 12  points with eight rebounds for the Prairie View A&M,  which won its fifth straight game and for the 11th time in the last 13 games.

BATON ROUGE, LA – The visiting Tigers led by as many as 13 with 12:11 remaining, but the host Jaguars rallied back with a 19-6 run to tie it at 54 with 4:03 left before Eddie Reese made two winning free throws with one second on the block to help Southern pull out the victory at the F.G. Clark Activity Center.

Reese finished with a game-high 21 points on 6-of-9 shooting from the field and was 8-of-10 from the line to go along with four assists, one steal and one block for the Jaguars (15-17).

HOUSTON – Newly-crowned Player of the Year Joyce Kennerson scored 27 points and dished four assists as No. 2 seed Texas Southern cruised past No. 7 seed Alabama State 70-42 during the quarterfinal round of the 2018 Toyota Southwestern Athletic Conference Women’s Basketball Tournament at HPE Arena.

Texas Southern (19-11) opened the contest on a 10-3 run as keyed by Kennerson and Kaitlyn Palmer. However, Alabama State regrouped, limiting TSU to one basket over the final 4:26 of the frame. Courtney Lee knocked down a trey with 47 ticks left to make the game 12-10 Lady Tigers at the end of one.

Texas Southern’s offense came alive in the second half, as the defending SWAC Tournament Champion outscored Alabama State 47-23 in the third and fourth quarters. TSU managed to push its lead to as many as 11 in the third, during which Kennerson scored 10 points. The Lady Tigers pulled away with a dominating 26-7 scoring advantage in the decisive frame.

BATON ROUGE, La. – Behind 28 points and 10 rebounds from Briana Green, top-seeded Southern fended off a feisty Arkansas-Pine Bluff squad, advancing to the semifinals of the Southwestern Athletic Conference Women’s Basketball Tournament with a 70-60 win Tuesday night at the F.G. Clark Activity Center.

Green, the 2017-18 SWAC Defensive Player of the Year, also accounted for five steals and a block. Samantha Duncan added 10 points and five rebounds.

Southern (16-12) flew out of the gate with an 11-2 run, limiting Arkansas-Pine Bluff (8-21) early on and taking a 16-7 lead into the second quarter. However, the Jaguars were unable to create much distance from the Lady Lions as the game progressed. The Lady Lions managed to cut the deficit down to as little as three, but Southern used a 7-2 run to push ahead by nine going into the break.

The Lady Lions, plagued by foul trouble all night, turned matters around in the third, outpointing the Jaguars 15-7 over the first five minutes of the quarter — a run capped by a Destiny Brewton lay-up — to take a 34-33 lead with 4:12 left in the stanza. The sides traded buckets until Green powered a 6-0 close to the quarter for Southern.

From there, Southern pulled away, pushing its lead to as many as 14.  The Jaguars shot just 30.6 percent from the floor (19-of-62), but forced 24 UAPB turnovers and outrebounding the Lady Lions 43-37, including an 18-9 advantage on the offensive glass.

Dobbins came into the contest needing to make four free throws to break the previous record of 280 free throws made, set by Kent State’s Larissa Lurken. Dobbins knocked down all 14 of her tries from the line, setting the new record at 291. The 2017-18 Newcomer of the Year also grabbed five rebounds. 2017-18 Freshman of the Year Jhyrah Cobb added 11 points and corralled 21 rebounds, and Dominique Newman scored 10 points and dished out four assists.

Down 52-47 heading into the fourth, Dobbins scored eight points over the first five minutes of the quarter to cap a 13-5 Prairie View run that tied the game at 58. Newman layed one home to give Prairie View the lead, but Jackson State responded in kind. After Derica Wiggins cashed in on a lay-up to tie matters at 62 with 1:13 left, Dobbins scored the go-ahead lay-up with 1:03 left, later knocking down two free throws to seal it.

Jackson State asserted itself early on, scoring 10 of the first 12 points in the game. However, Cobb was the difference as the period came to a close, scoring six points during an 8-0 PVAMU run that allowed the Lady Panthers to knot things up going into the second. A back-and-forth affair early in the frame, Ellis knocked down a three-ball and later converted from close range to spark Jackson State down the stretch. At the break, JSU led 29-25.

Prairie View was forced into catch-up mode during the third, and when Dobbins converted both ends of a foul line trip to bring PVAMU within one (39-38) at the midway point, Hamer, Chelsea Causey and Kawaii Perry fueled an 11-2 run that put Jackson State ahead 50-40 with just over 2:00 left in the third. The Lady Panthers closed to within five to end the frame, setting the stage for their eventual comeback win.

Prairie View will take on #1 Southern in the first SWAC women’s semifinal on Friday at noon in the Delmar Fieldhouse.

The Lady Tigers and Lady Braves traded baskets early, but Grambling overwhelmed Alcorn State down the stretch of the first quarter after Freeman sank a jumper to make the game 17-13 in favor of the Lady Tigers with 4:26 left in the first. From that point, Grambling outscored Alcorn 14-5, taking a 31-18 lead into the second quarter.

Alcorn returned fire as Freeman took over the initial goings of the second quarter. Freeman netted 10 points during an 18-5 run — capped by back-to-back threes from Cloe Lane — to tie the game at 36 with 3:56 left in the half. Hill converted a three-point play to push Grambling back in front, but Sanders had a perfect trip to the line, and a jumper from Freeman as well as another three from Lane handed the Lady Braves a 43-39 lead at the break.

Alcorn pushed its lead to 10 with 7:55 left in the third, but Hill brought the Lady Tigers back, scoring 10 points during a 15-6 run. Grambling’s Ariel Williams knocked down a jumper as time expired to close the quarter and leave the Lady Tigers trailing by one.

After Ugochinyere Nwarie converted a shot to put Alcorn up 60-57 with 8:26 left, Boyd caught fire, scoring eight points over the next 90 seconds to put Grambling ahead 65-60. The Lady Braves got no closer than five the rest of the way.

With the win, Grambling sets up a rematch of last year’s tournament final in the semifinals, as the Lady Tigers will play defending champion and No. 2 seed Texas Southern at 6 PM Friday in Delmar Fieldhouse.