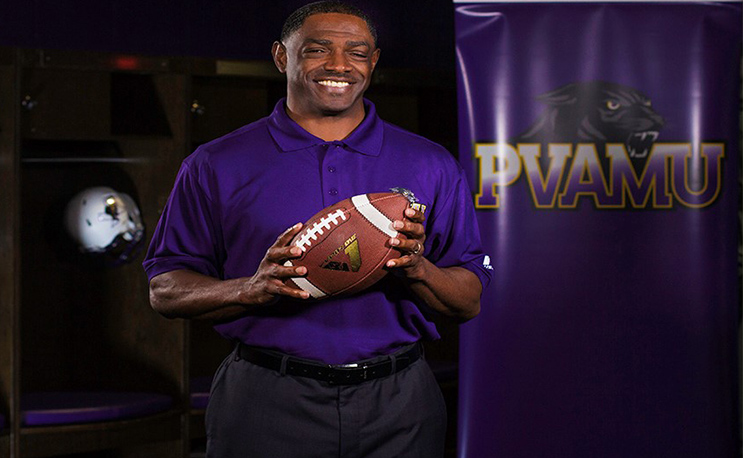 After paying his dues as a long-time assistant around the SWAC, Eric Dooley finally gets his chance to run the show.

One of the key figures of Grambling’s football resurgence is saddling up and moving west.

Eric Dooley is leaving his post as offensive coordinator at Grambling to take over as head coach at Prairie View A&M, the school announced on Friday morning.

Dooley has spent the last four years as Broderick Fobbs’ right-hand man, helping Grambling reach at least the SWAC Championship Game in each of the past three seasons and coaching the SWAC Offensive Player of The Year in each of those seasons.

A hot name on the coaching circuit, Dooley was thought to be the front-runner for several open jobs, including UAPB. Instead, he will fill the hole left by Willie Simmons who left after three seasons to take over as FAMU head coach.

Dooley may be a first-time head coach, but he will be far from a novice. He’s won at every place he’s coached.

“He’s worked under and with some of the legends of and greats of our conference – from Pete Richardson (Southern) to Monte Coleman (UAPB) to Broderick Fobbs (Grambling)– all men who have led programs to championships,” PVAMU Vice President/Director of Athletics Ashley Robinson said in a statement. “Our new coach has been a part of teams that have won nine SWAC Championships, six HBCU National Championships, and three Bowl game victories. Simply put, he’s a winner, and we look forward to him leading Prairie View A&M football to championship success.”

Prior to his coaching career, Dooley played under legendary Grambling coach Eddie Robinson in the mid-1980s.

“After playing at Grambling, he was associated with some great teams at Southern as an assistant coach, worked his way up through the ranks, and has been involved in some great programs as a coordinator,” Richardson said. “I think more than anything else, he understands how to build programs. He’s learned really well in terms of order and organization. Also, he’s going to demand respect and discipline from his players. The great thing about him is he understands how to recruit. He’s a great recruiter, and he understands talent.”

He comes to a program that showed promise under Simmons, but never managed to beat SWAC West rivals Grambling and Southern in those three years. It appears Prairie View has decided if you can’t beat them, get them to join you.