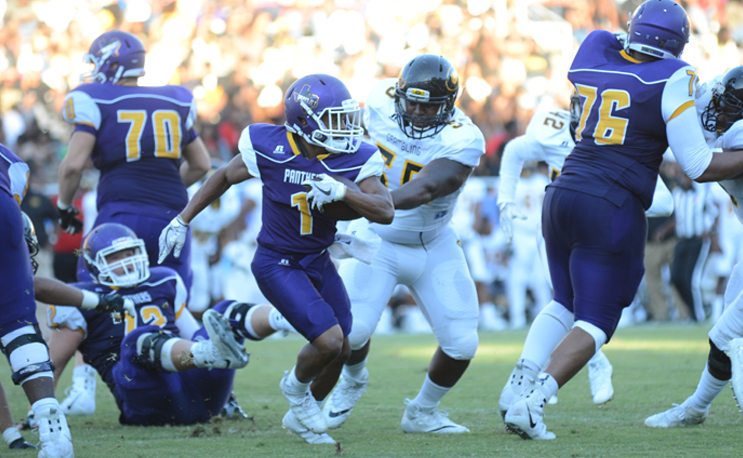 Grambling looks to flex its muscle against explosive Prairie View

The State Fair Classic could go a long way towards setting the pace in the SWAC West.

The college football season is a special time for us all but weekends like the one ahead in the SWAC are extra special. This weekend the teams who were expected to compete for conference supremacy all compete against each other in games that will potentially alter the divisional and conference race.

Weekends like this are where plays are made that will be talked about for the next decade and legendary players are born. The road to Birmingham and Atlanta will now reach its first fork in the road as Prairie View and Grambling meet in the Cotton Bowl in Dallas for the State Fair Classic, and Alcorn State will pay a visit to the Jaguars of Southern. Let’s take a deeper look at the two matchups in the SWAC that will put two of these four teams in the driver’s seat to a divisional title and potential conference title.

This weekend Dallas catches a matchup that has been eagerly anticipated since December 22, 2017 when then Grambling offensive coordinator Eric Dooley was named the new head coach at Prairie View A&M.

Losing an offensive coordinator like Eric Dooley was tough, but to lose him to one of your most hated rivals adds fuel to the fire. And this fire has had fuel added almost every day since last December.

The Dooley Era at Prairie View almost started with an upset of FBS Rice in game number one and then followed up with an impressive win against North Carolina Central in the MEAC/SWAC Challenge. The PVAMU program hasn’t looked this good and promising since the 2009 season under Henry Frazier.

On the opposite end of the spectrum, the two-time defending SWAC Champion Grambling has looked like everything but the juggernaut that we’ve grown accustomed to seeing. While Prairie View was putting teams on notice, the Tigers struggled to a 0-2 start and had fans around the SWAC wondering if the King’s reign was done. Last week the Tigers bounced back at home with a 34-0 win over Alabama State and the Tiger offense showed slight improvements from the previous two games. Grambling still struggled through the air, only amassing 82 yards and a completion percentage of less than 50 percent.

Defensively, the Tigers gave up 309 total yards but were able to force four turnovers. GSU takes the momentum from last week into the Cotton Bowl where they face a Prairie View A&M program that hasn’t beaten them since 2013 and only has five total wins against Grambling since 1985. Grambling comes into this edition of the State Fair Classic as a rare underdog and it will need to put offensive points on the board against PVAMU

Coach Broderick Fobbs announced earlier this week that quarterback Aldon Clark will get the start on Saturday. Clark is a dangerous runner on the ground who could potentially cause problems for the Prairie View defense. On the other side of the ball, Prairie View brings in an offense that ranks first in the SWAC in total yards, second in rushing, and third in passing yards.

Like Grambling with DeVante Kincade and Martez Carter in years past, this Prairie View offense has an explosive 1-2 punch in the backfield. Running back Dewonya Tucker has 723 yards already this season, leading the FCS. Quarterback Jalen Morton leads the SWAC in passing yards with 1158 yards through the air and 10 touchdowns.

Defensively the Panthers are currently ranked fourth in the league while the G-Men are ranked sixth. Grambling has a 52-18-1 all-time record vs Prairie View including a 26-5 mark against The Panthers in the State Fair Classic. Prairie View has been the talk of the early season but Championships aren’t won in September! To be where they want to be, Prairie View has to beat Grambling on Saturday.

For as unimpressive as Grambling has looked in the early going of the season, a win on Saturday will send waves through the conference that reports of the King’s demise have been greatly exaggerated.

Grambling looks to flex its muscle against explosive Prairie View