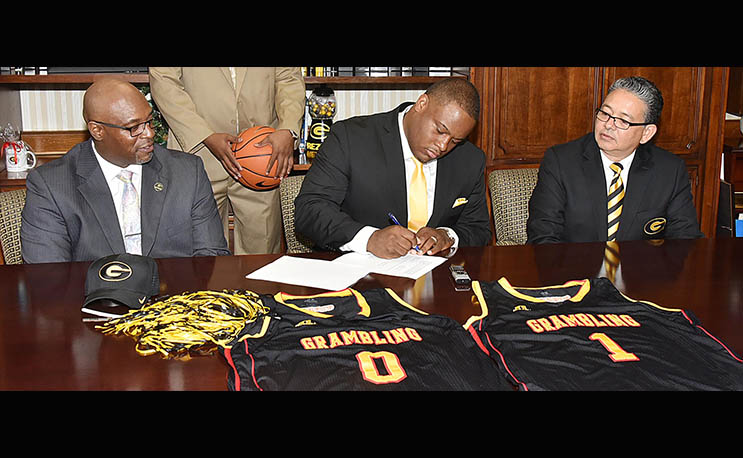 Jackson officially signed his contract in front of a small crowd of media members, athletics staff and his family in the office of GSU President Rick Gallot.

“We’re excited today to sign this contract,” Gallot said. “The future of Grambling and Grambling basketball is bright. And of course, whenever Willis Reed says that you have a great coach, then you have to be a great coach.”

Bryant welcomed Jackson to the department by giving him an official Grambling State pin and baseball cap.

“This is a great day for our athletics department and our men’s basketball program,” Bryant said. “We have a leader who will be an example for our young men in the classroom as well as on the playing surfaces and in the community.”

Prior to GSU, Jackson spent three seasons as the head men’s basketball coach at Stillman College in Tuscaloosa, Alabama. During his time there, he went 66-21 overall and won the 2016 Southern Intercollegiate Athletic Conference (SIAC) Tournament and earned a berth in the NCAA tournament, where they defeated West Georgia in the first round.

At the end of the 2015-16 season, he was named the SIAC Coach of the Year, as well as BOXTOROW National Coach of the Year. In his last year at Stillman, he also served as Stillman’s interim director of athletics, in addition to maintaining his role as head men’s basketball coach.

Prior to Stillman, Jackson led the men’s basketball program at Central State University (CSU) in Wilberforce, Ohio, for four seasons. He took over the program in 2010 after serving as an assistant coach at CSU for seven seasons.

He led the Marauders to the NAIA Division I National Tournament and a Sweet Sixteen appearance with a 24-8 record during 1999-2000 season. Jackson capped his stellar career by being selected as the recipient of the John W. Garland President’s Award, presented annually to a student-athlete who embodies the highest standards of leadership, integrity and sportsmanship through academic and athletic achievements.