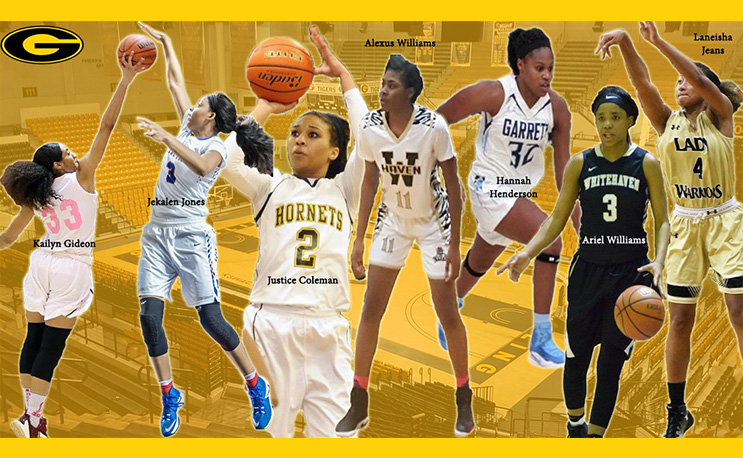 Grambling’s new coach is bringing a lot of new faces with him to women’s hoops.

“I want to thank my coaching staff for putting in countless hours recruiting to address our needs and depth with this class,” Murray said. “This recruiting class is a giant step in the right direction. All these young ladies come from great families, are dedicated to getting their degrees and will all be impact players for our program. I’m excited to coach them and welcome them to our family!”

Jeans will have two seasons of eligibility at GSU.

Murray on Jeans: “Laneisha is an extremely competitive, skilled combo guard that brings experience to an already talented team. She is a deadly shooter from deep who can create her own shot and finish at the rim. She is a tremendous character kid who flourishes in an up-tempo style of play. She is a great on-ball defender.”

Gideon, a rising junior who played two seasons at Pasadena Community College in Pasadena, Calif., averaged eight points, nine rebounds and three blocks per game in 2016-17. She set several records at PCC including most blocks in a season (113) and in a career (164). In 2016-17, she led the state in blocked shots per game (3.8) and paced her team with a 52.9 shooting percentage from the floor. She also tallied 503 career rebounds at PCC. Gideon will play for the Lady Tigers for two seasons.

Murray on Gideon: “Kailyn is a very long and agile center that runs the floor well. She is a very quick leaper and rebounds well around the basket. She does a great job of blocking and altering shots and can be a defensive presence inside.

Henderson comes to GSU from Garrett College in McHenry, Md. As a freshman last season, she averaged 21 points, 13 rebounds and two assists per game while shooting 41 percent from beyond the arc. She earned First Team All-Region XX honors and ranked fourth in the nation with a 60.1 field goal percentage. Henderson has three seasons to play for the Lady Tigers.

Coleman was a four-year starter for the Scotlandville High School Lady Hornets in Baton Rouge, La. She averaged 21 points, six rebounds and five assists per game as a senior during the 2016-17 season. During her interscholastic career, she earned several honors including team MVP, First Team All-District 4-5A and was named to the ISC All-Academic Class Team.

Murray on Coleman: “Justice is a very athletic, aggressive guard that is capable of playing multiple positions. She excels on the break by running the floor and playing in open space.  She has good length to create space and shoot the long ball over players. She has the size and athletic ability to be a capable, multiple-position defender as well.”

Jones averaged 10 points, seven rebounds, three assists and one block per game as a senior last season at Parkview High School in Little Rock, Ark. She is a three-time all-conference player and has participated in the All-Metro Classic and the Mike Conley, Jr. Arkansas vs. Tennessee All-Star games. Jones is nationally ranked by Premier Basketball and All-Star Girls Report.

Murray on Jones: “Jekalen is a very athletic wing that has and plays with a lot of heart and passion for the game. She shoots the ball well from 15-17 feet and is extremely versatile and capable of playing inside and out. She has great poise for such a young player.”

During the 2016-17 season, Alexus Williams averaged 13 points and 14 rebounds per game as a senior at Whitehaven High School in Memphis, Tenn. At one stretch during the season, she three consecutive games where she grabbed 28, 21 and 19 rebounds. She excelled in volleyball and basketball while in high school and earned all-district honors after a stellar basketball season as a senior.

Murray on Alexus Williams: “Alexus is a high-energy post player that loves to rebound and compete on both ends of the floor. You will always find her around the ball and her toughness and physical play will immediately be an asset to our team. We’re excited to be a part of Alexus’s future and anxious to see the impact she can make here at Grambling.”

Ariel Williams was a four-year starter who also played for Whitehaven High School in Memphis, Tenn. Last season, as a senior, she averaged 19 points, nine rebounds and seven assists per game. Ariel was a three-time all-district, two-time all-region and a two-time All-Shelby Metro honoree. Additionally, she led Whitehaven in scoring, assists and rebounds for three straight seasons.

Murray on Ariel Williams: “Ariel is a very explosive point guard that can score and create shots for her teammates. She is very tenacious and a great on-ball defender who plays extremely hard when she is on the floor. She has great court-vision and has a high basketball IQ. We truly love her competitiveness and passion for the game and she wants to compete with and against great talent. Ariel’s speed and ability to defend multiple positions will be a huge asset to our team.”

The seven newcomers will be joined by 5-9 guard Deja McKinney and 6-2 center Alisia Machado, both of whom sat out the 2016-17 season.