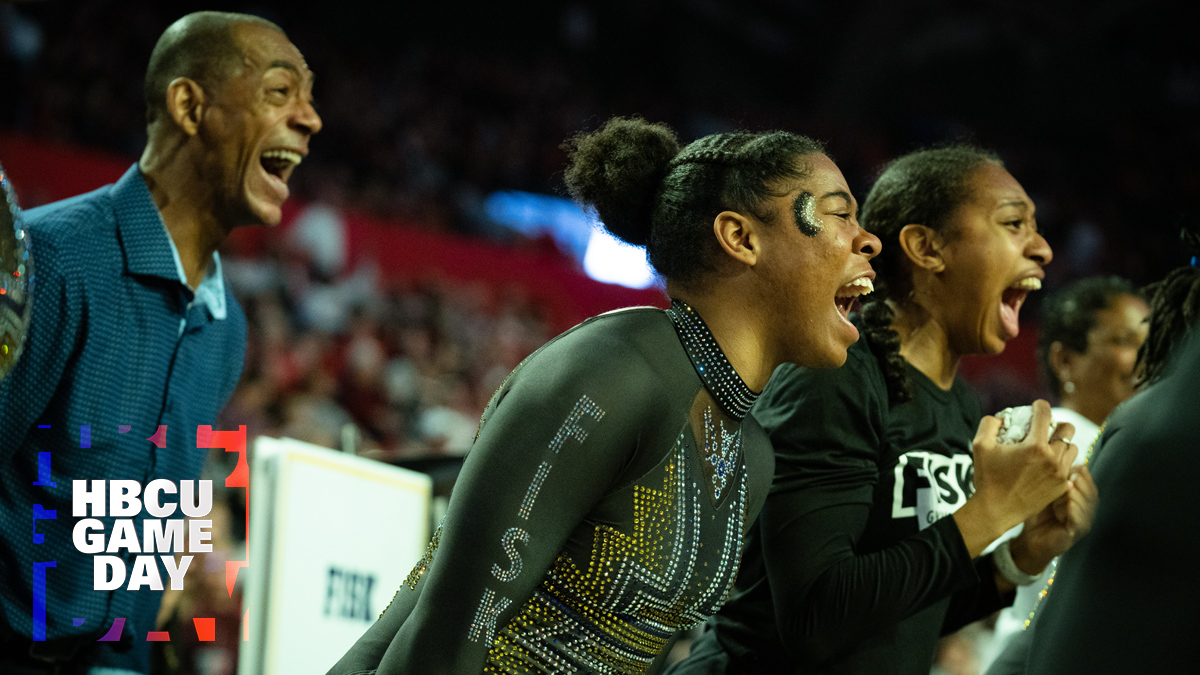 The Fisk University gymnastics team made its debut in the South and it got a heroes welcome from the crowd.

ATHENS, GA —It’s two hours before meet time at Stegeman Coliseum on the campus of the University of Georgia and Sandra Hill-Lewis is trying to find tickets to see Fisk University gymnastics compete. She’s not having much luck — the exhibition is sold out — but she’s determined to get in and see the first-ever HBCU gymnastics team compete.

Hill-Lewis isn’t a Fisk alumna. She’s a proud product of Kentucky State University, which she represented on both her shirt and scarf.

Hill-Lewis wasn’t the only one looking to get tickets as they were only available via third-party vendors  — and they weren’t cheap. Eventually, she did get in, and whatever she paid, the price was worth the admission.

Monday’s match was a homecoming for Fisk University head coach Corrine Carver. The first-ever HBCU gymnastics coach is a UGA legend who became the first black gymnast in school history, then went on to become the first African-American to win an NCAA all-around championship.

“My time here at Georgia was absolutely amazing. I loved every second of it. So to go back and really I think the most emotional part was the fact that I got to share the experience with my team.”

Fisk University finished fourth out of four teams  — UGA, Rutgers and Ohio State. But all of those are established programs. It was just the third in school history for the Nashville, TN-based squad.

“We’re pioneering. We’re the benchmark for other HBCUs to add (gymnastics),” Tarver said. She went on to recognize that another HBCU — Talladega College — recently announced it was starting a program as well.

“I feel like I’ve accomplished something in the sense that they can see that it’s doable. Because I think, for a long time, HBCUs just didn’t think that gymnastics was an option for them for whatever reason.”

When the meet was over, the crowd eased its way onto the floor, flooding the Fisk gymnasts with love in the form of warm words, photo requests and hugs. This went on for several minutes, with the crowd having to be ushered off the court so the facility workers could break things down.

“Honestly, the crowd was amazing. And the welcome that we received —  you could just tell everybody was, you know, excited. They were watching their own, you know, watching Georgia fall and watching their own teammates, team members. But they were excited to watch us. And the girls fed off of that energy and they really wanted to represent coming here to Georgia.”

Representation is the least of Fisk’s worries. A much bigger one, Tarver says, is keeping the team balanced as they grow as a group.

“Coming into Michigan, then it was about coming down off of Vegas and I could see that the energy wasn’t the same. But then coming to Georgia, it was like, Oh, okay, we got to bring that energy back up. And they did an amazing job. So we need to make sure that the energy doesn’t go back down a lag again. So we have a home meet. So it’s going to be I think that’s going to help the energy, but it’s still going to be one of those situations where they have to learn how to week in, week out stay the same.”