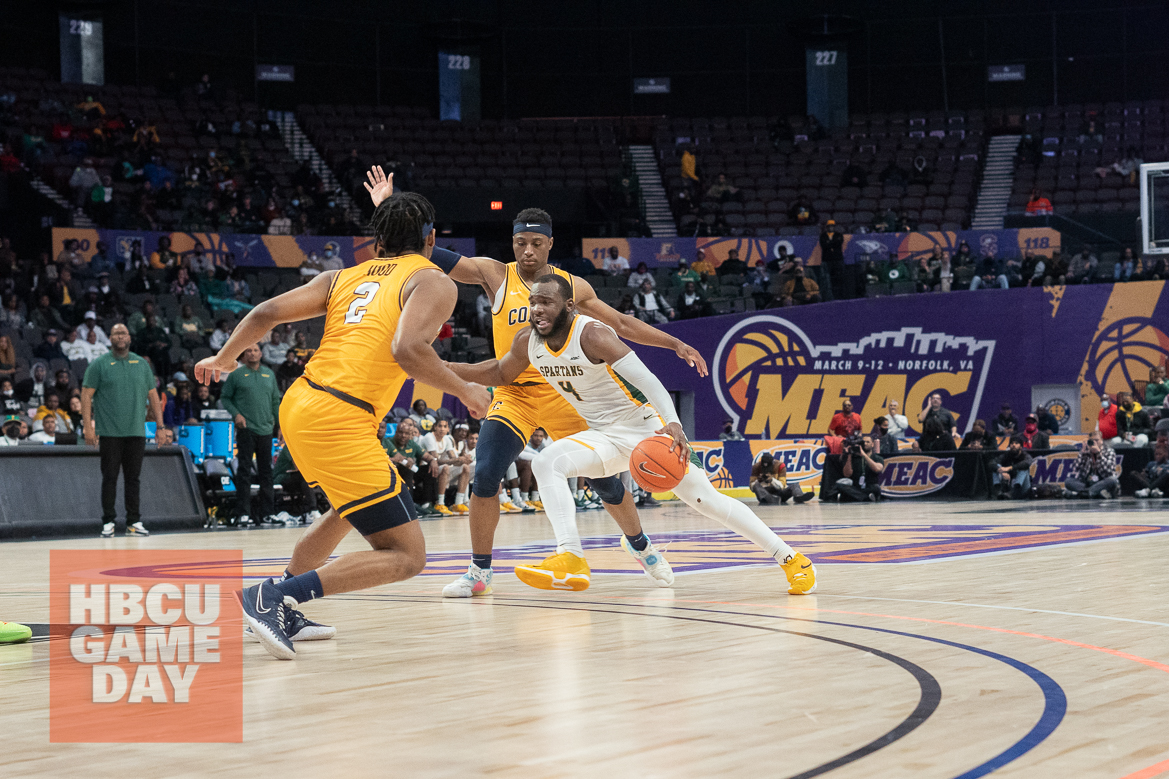 Norfolk State was down big but found an offensive spark for a huge comeback win over William & Mary.

WILLIAMSBURG, Va. – Norfolk State men’s basketball stormed back from behind at William & Mary on Saturday afternoon, ending the game on a 24-2 run. The Spartans (6-4) defeated the Tribe (4-7) 67-53, fueled by Joe Bryant Jr.’s 24 points and Chris Ford’s career-high seven blocks.

Christian Ings (12) and George Beale Jr. (10) also scored in double-figures, with Beale recording nine points in the second half. The Spartans have now beat the Tribe two years in a row, securing a 91-74 win at Echols Hall last season.

William & Mary has emerged as one of the best sharpshooting teams in the CAA this year, and the team put that on displace from the opening tip on Saturday, knocking down a trio of 3-pointers for a quick 9-2 lead. The Tribe hit six 3-pointers in the first half, led by proven marksman Anders Nelson.

Despite trailing early, the Spartans fought to keep the deficit tight in the first half, led by Bryant’s offensive firepower. The fifth-year guard hit four 3-pointers in the opening 20 minutes, pacing the Spartans with 14 points at the break.

Bryant knocked down his fourth deep ball in the final minute of the half, cutting the deficit to seven. Cahiem Brown knocked down a floater to get the Spartans going after an early draught in the second half, but the Tribe continued to come up with timely baskets as NSU chipped away at the lead.

With the Spartans trailing by nine midway through the second half, Brown found a streaking Beale for a fast break dunk that got the bench on its feet. Beale hustled for a second chance layup a couple minutes later, before knocking down a huge 3-pointer to pull the Spartans within three.

Bryant kept the momentum going with a quick 3-pointer off a ball screen to knot the game at 51. Ford scored in the paint while drawing a foul moments later, giving the Spartans their first lead of the game. Ings and Bryant traded-mid range jumpers, before Ings scored on the fastbreak to give NSU a nine-point advantage with three minutes to play.

Norfolk State’s defense proved impenetrable in the final stretch, as NSU sealed the win with continued discipline on that end of the floor. The Tribe scored two points in the game’s final eight and a half minutes, thanks in large part to Chris Ford’s rim protection.

Ford’s performance marked just the fifth time in Norfolk State history that a player has recorded seven or more blocks in a single game, the first time since Kyle O’Quinn achieved the feat against Morgan State on Jan. 14, 2012.

Norfolk State returns to Echols Hall on Wednesday for a stout nonconference matchup against Bowling Green at 8 p.m.