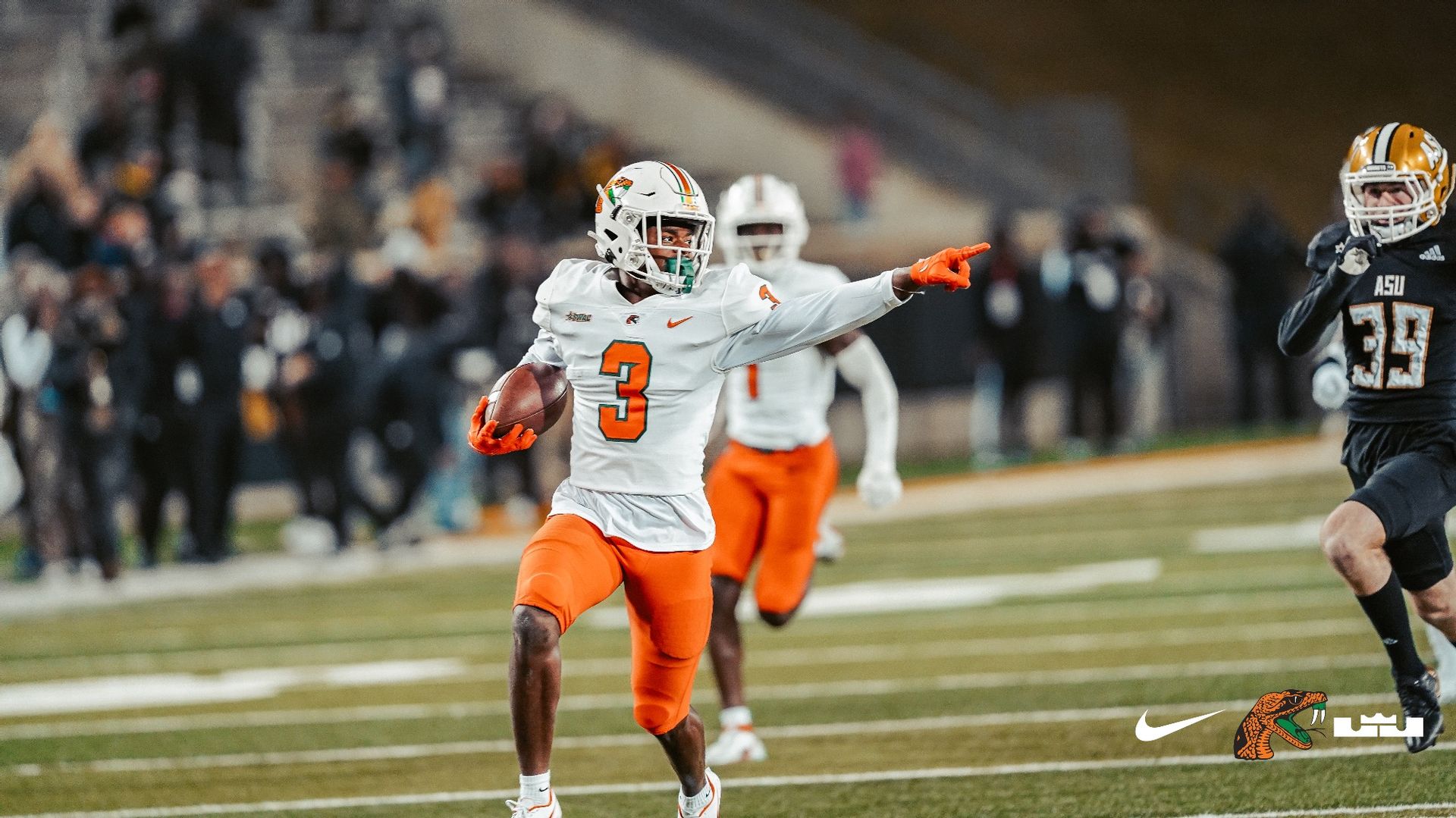 Florida A&M visited the New ASU Stadium and defeated Alabama State on Saturday afternoon by a final score of 21-14.

Florida A&M’s Xavier Smith went for a season-high 145 receiving yards to lead the way. FAMU piled up 384 yards in an efficient offensive performance. FAMU’s defense was also solid, particularly against the run. They limited the Alabama State running backs to just 0.4 yards per rush.

It was tense in ASU Stadium starting in pre-game and it took all 60 minutes to decide the outcome.  On the last play of regulation, Florida A&M blocked a 51-yard field goal attempt by Alabama State, which was scooped up by FAMU’s Kendall Bohler who ran it in for a 51-yard touchdown as time expired.  The Rattlers would prevail 21-14 and keep hopes of a bid to the NCAA FCS playoffs in tact.

FAMU quarterback Jeremy Moussa had three interceptions in the game.  Usually a protector of the football, he had only seven interceptions all season coming into the game.  Critical miscues kept the game closer than it could have been throwing two Red zone picks.  He threw for a total of 49 times, completing 25 of those with two touchdowns.

Kisean Johnson was a noticeable bright spot for ASU. He caught five balls for 69 receiving yards and one touchdown to pace Alabama State. The O-line was a weak spot for Bama St., They were pressured into six sacks. They also racked up 47 yards of penalties, which proved too much to overcome.

Special teams was the story of the night.  With both ASU and FAMU’s defenses being stingy all night, big plays on special teams were the key to victory.

FAMU opened the game with a methodic scoring drive, going 90 yards on 13 plays.  The drive took 5:46 off the clock.  Moussa would hit Xavier Smith on a crossing pattern for the score.  ASU tied the game at 7-7 going into halftime with a well-crafter flea-flicker, leaving Kisean Johnson wide open for a 37-yard touchdown.

In the third quarter, FAMU All-American defensive lineman Isaiah Land corralled ASU quarterback in his own end zone, forcing him to execute an intentional grounding infraction.  With the offense happening in the end zone, FAMU was awarded a safety, bringing the score to 9-7.

The fourth and deciding quarter was just that.  ASU blocked a punt by FAMU’s Chris Faddoul and Cail Jackson scooped and scored for a 50-yard touchdown, giving the Hornet their first lead of 14-9 with 7:46 remaining.  The Rattlers would march right back down the field to retake the lead.  A nine play 59-yard drive for the Rattlers would end in FAMU receiver Ja’Marae Sheread literally carrying a defensive back the final three yards into the end zone.  The touchdown game the Rattlers a 15-14 lead after a failed two-point attempt.

ASU would drive down the field in the final seconds of the game, setting up a Jayden John field goal attempt from 57-yards into a stiff breeze.  FAMU defensive lineman Donald Hall got push up the middle for the block and Bohler did the rest to preserve a critical win for the Rattlers.

FAMU (8-2, 6-1 SWAC) preserve their second place position in the SWAC eastern division with the win.  ASU (6-4, 4-3 SWAC) remain in third place in the eastern division, one win ahead of the Alabama A&M Bulldogs who are in fourth at 3-4 in the SWAC.

Alabama State will conclude the 2022 season next week as Arkansas Pine-Bluff visits Montgomery.  The Rattlers will face their arch-rival in the Bethune-Cookman Wildcats next week in the Florida Blue Florida Classic at Camping World Stadium in Orlando, Fla.