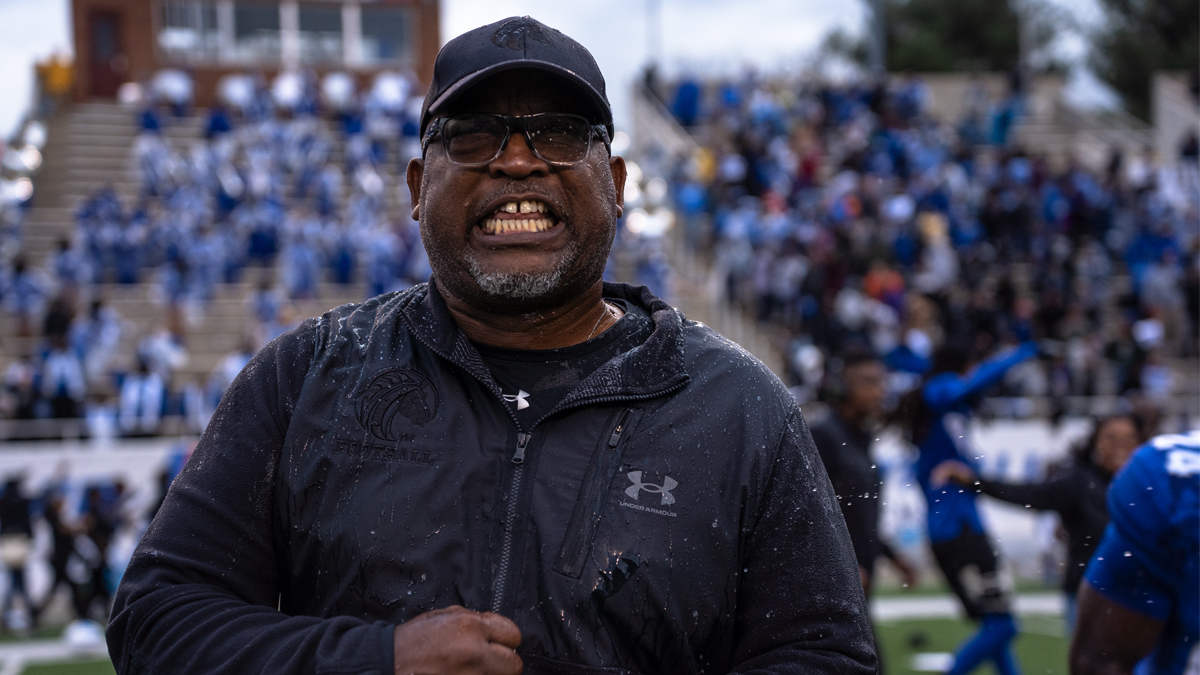 Fayetteville State head coach Richard Hayes Jr. is doused with the Gatorade bath after his team’s last-second 31-28 win over Chowan in the CIAA Championship Game. It was the first win for Hayes and the Broncos after four straight losses in the title game.

Hayes kicks the monkey off his back

With the win, Hayes Jr. duplicates a feat that saw his uncle, former Winston-Salem State and NC A&T head coach Bill Hayes, come up short in four straight title games from 1983-86 before taking the crown in 1987.

“First of all, hats off to Coach (Mark) Hall and Chowan,” said Hayes in the postgame press conference. “They’ve done a great job this year knocking off all the giants. But we just weren’t going to go for it today. We had to be resilient. He (Hall) came out swinging with all punches.

“I knew it was going to be a tough game for us. I knew he had a lot of tricks up his sleeve. But at the end of the day, we made some adjustments at the end of the third and fourth quarter defensively to try and slow down what they were doing. And it worked for us a little bit.

“The Broncos win! We’re happy. We finally got the monkey off our back.” said Hayes. “We won’t have to answer those questions anymore.”

The game-winning drive began after FSU (9-2) attempted to field a Chowan punt at their own 37. Chowan (7-4) however was called for interfering with returner Cedric Thomas as he called for a fair catch. The resulting 15-yard penalty gave FSU 1st-and-10 at the Chowan 46 with 2:19 to play.

FSU freshman quarterback and game MVP Demari Daniels led the Broncos on the game-winning drive. A key play was a 4th-and-four conversion from the Chowan 40 on a play the FSU head coach called “duck.” FSU lined up with just the center and Daniels on the ball and the rest of the FSU offense split wide left.

Daniels hit RB Henry Elijah in the left flat who wound thru would-be tacklers for the critical first down to the Chowan 35. It kept the drive alive. Two plays later, Daniels (12-24-1, 188 yards, 2 TDs) hit Cameron Harrington with a 14-yard pass that carried to the Chowan 22.

A four-yard loss on a run by Elijah set the Broncos up at the Chowan 26 with five ticks left. After an FSU timeout, Elton came in and nailed the 43-yard game-winner.

The difference this time around

“The difference is we gave ourselves a chance early,” Hayes said. “In the previous four, before you could blink we were down 14-nothing. We turned the ball over early in each game, in the first quarter, and we found ourselves fighting an uphill battle. This time we scored first and got up first.

“We did a good job in the third and fourth quarter of getting control of the game. So, we won.”

The teams came out blazing with both teams scoring 14 points in the opening quarter. They settled down after that. Chowan scored the only second quarter touchdown on a Peoples’ 11-yard run to pull ahead 21-14 at the break. The Broncos scored the only third quarter TD on a 54-yard pass from Daniels to Knotts to send the game into the final quarter with the teams tied at 21.

They exchanged fourth quarter TDs, the first from Chowan on a 2-yard run by Peoples. The last from FSU on a 1-yard run by FSU back-up QB Caden Davis with 4:51 left that tied the score at 28 and set up the final heroics.

The teams played on Sept 29 in the regular season with Fayetteville State escaping with a 13-10 win. This game was different. The 14 points each scored in the first quarter were more than either mustered in their earlier meeting.

“We were fortunate to play Chowan early and we knew some of the things they would try to do,” said Hayes. “If you go back and look and the games when we’ve played them, they’ve all been close. We didn’t expect anything less today.”

Chowan came in on a five-game winning streak and as a likely favorite to send FSU and Hayes to their fifth straight championship game defeat. They had knocked off perennial N. Div. powers Virginia State, three-time defending league champion Bowie State and then undefeated Virginia Union in one-score games on successive weeks to claim its first N. Div. title and championship game appearance.

FSU was on a six- game winning streak of its own that began with the win over Chowan.

Big plays and long drives helped Chowan go into the break with a 21-14 lead. Penalties and turnovers kept them from having a bigger lead.

Chowan put up 301 yards of total offense to just 88 for FSU in the first half. But they committed two turnovers, one leading to the first FSU score and another stopping a Hawks’ drive deep into FSU territory. They also committed six penalties, five on pre-snap infractions. Three came on false starts and two on delays-of-game.

“We made a couple of critical mistakes and a had a couple of missed opportunities,” said Hall. “We didn’t capitalize on some opportunities that we had. I don’t think there was any one play. We had our chance to get some separation on the scoreboard and we didn’t. We let them hang around a little bit and they four a way to make one more play in the end than us. “

“I’m proud of us as a team,” said McKee. “We are a very competitive group. We battled to the end.”

Fayetteville State drew first blood when the Broncos recovered a Chowan fumble on a flea-flicker throwback to QB Rashad McKee at the Chowan 15. It came on Chowan’s first possession after an FSU punt in the game’s opening possession. Broncos running back Elijah Henry covered the 15 yards on the first play after the recovery. After the PAT, FSU led 7-0 with 10:37 left in the opening quarter.

Chowan answered with a 4-play, 62-yard drive culminating with RB Nijere Peoples’ 11-yard TD scamper up the middle. The big play was a 23-yard pass from McKee to wide receiver Demetrius Moore. The score produced a 7- 7 tie with 4:37 to play in the period.

FSU’s Brian McIntyre returned the ensuing kickoff 71 yards to the Chowan 19. The Broncos needed just one play to reach paydirt as Daniels hit Elliott on a crossing pattern in the end zone. The PAT put FSU up 14-7 with 4:20 left in the period.

Chowan came back to drive 82 yards in seven plays and tie the score at 14 on McKee’’s 5-yard scoring run. The PAT tied the score at 14 just :52 seconds before the end of the quarter.

A chilled out second quarter

After the back-and-forth first period, the only second-quarter TD came on another long Chowan drive. It covered 89 yards in 14 plays and took almost eight minutes off the clock. The score came on a 15-yard run by Elijah with a little under five minutes left in the half.

Chowan drove deep into FSU territory again in the final minutes of the half but McKee committed Chowan’s second turnover of the half. He threw a costly interception that FSU safety Brandon Barnes-Brown picked off at the FSU 9 with just under a minute left.

McKee accounted for the bulk of the Chowan offense. He completed 13 of 18 passes for 192 yards and also ran for 23 yards. Peoples led the ground attack with 46 yards on seven carries. Moore had five catches for 83 yards.

Daniels was 4 of 6 for 31 yards and also led the Broncos on the ground with 25 yards on six carries in the half.

Bill Hayes ended his four years of frustration in 1987 with a 22-12 win over Hampton. Like Richard Hayes, Bill Hayes won with a freshman, Connell Maynor, as his starting quarterback, Demari Daniels is also a freshman.

Both Maynor and Daniels wear No. 12 jerseys.