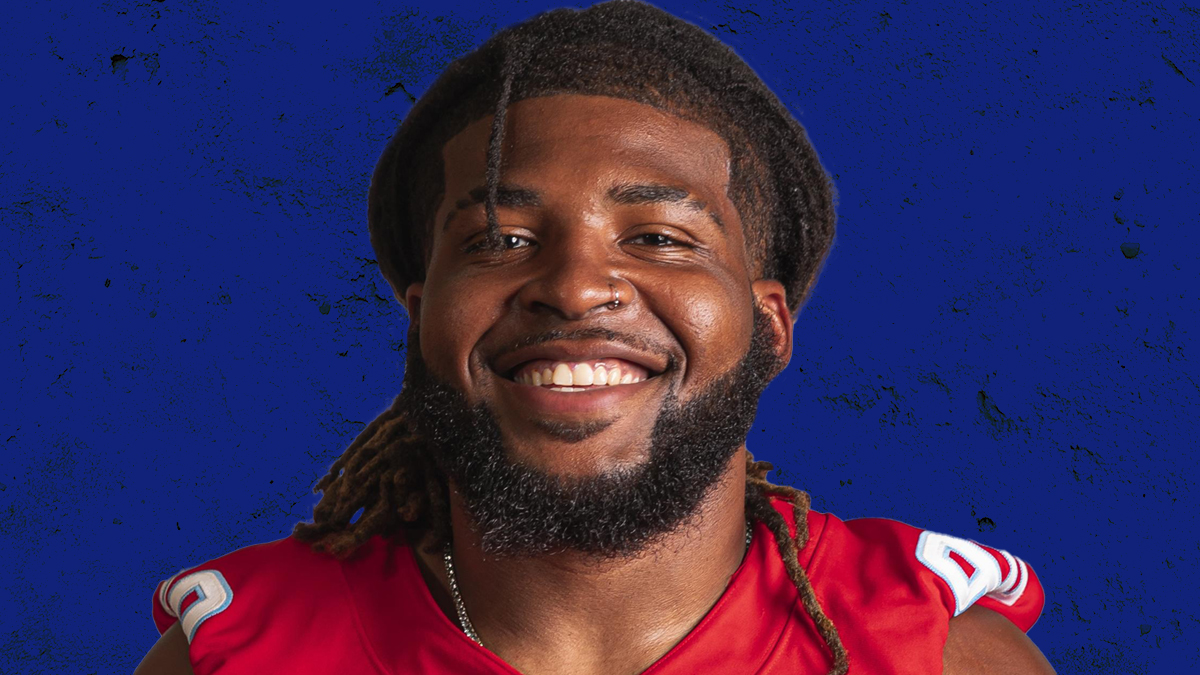 Delaware State is on track for its best season in a decade. And Isaiah Williams is a big part of that.

The NFL is the ultimate goal for most college football players — and that includes Delaware State defensive lineman Isaiah Williams.

The 6’2, 295 pound New York native is a pro prospect that doesn’t have to look far for NFL inspiration.  DSU head coach Rod Milstead called Williams “special,” and shared that he allowed him to make a special decision earlier this year.

“The kid decided that he was going to change the makeup of his body. So he went vegan. Cut a bunch of weight. I mean, he looks like a Greek god without a shirt on,” Milstead said during the MEAC Media session. “And he just decided that this off-season, instead of being here with the team and summer access, that he was going to stay in Indianapolis with his brother playing with the Colts.”

Williams’ brother is Christopher Williams, a defensive lineman with the NFL franchise.

“He made a lot of videos while he was out there. He was shooting the videos back to his teammates, actually watching him work in explaining the techniques as he was getting taught the techniques himself,” Milstead said. “So for us, it’s been phenomenal. I hope and pray next year he takes the whole D-line out there. I’ll be ecstatic if he does that as well.”

Milstead played offensive line in the NFL in the 1990s after starring at DSU.

“If you can get it while you’re in college, they get it,” Milstead continued. “You can say the same thing about my offensive line. They got a head coach who played professional football. I’m giving it all, everything that I learned. They’re getting it. So it’s starting to pay dividends for us. And we’re excited that he can do those type of things, but he’s just a different guy. That’s why the scouts are in here on a weekly basis looking at him. He’s a different cat and if he keeps this up — hopefully, he’ll get an opportunity to be playing on Sundays.

Isaiah Williams has been with Milstead since he returned to his alma mater as head coach prior to the 2018 season. It’s been a long road for both the player and the program as it has experienced growing pains.

“I knew we didn’t have the resources to turn this thing around overnight, and so it was going to take some time to build it,” Milstead said of building his program. “It was going to start the recruiting group getting the right kids that fit the Delaware State mindset, having them believe into the vision and then promoting the program through the process. And these guys have done it.”

Delaware State looks to be a player in MEAC race

Delaware State enters Saturday’s game at Howard University 4-2 overall, 1-0 in the MEAC. That’s a big accomplishment for a program that hasn’t had a winning season in 10 years.

“We have six teams in the MEAC in order to have a say you got to win every week. Coach (Trei) Oliver just mentioned that one loss. Somebody else is kind of telling you, you have a shot to win the MEAC, if you continue to win like South Carolina State did last year, when they ran the table. They had to say of where they were going to go at the end. And that’s something I think everyone right now is fighting for…having an opportunity just to get to Atlanta (for the Celebration Bowl.)

But Milstead is doing his best to make sure his team doesn’t overlook a step.

“But that’s the big picture,” Milstead said, coming back down to earth. “All we’re focused on right now is Howard University.”