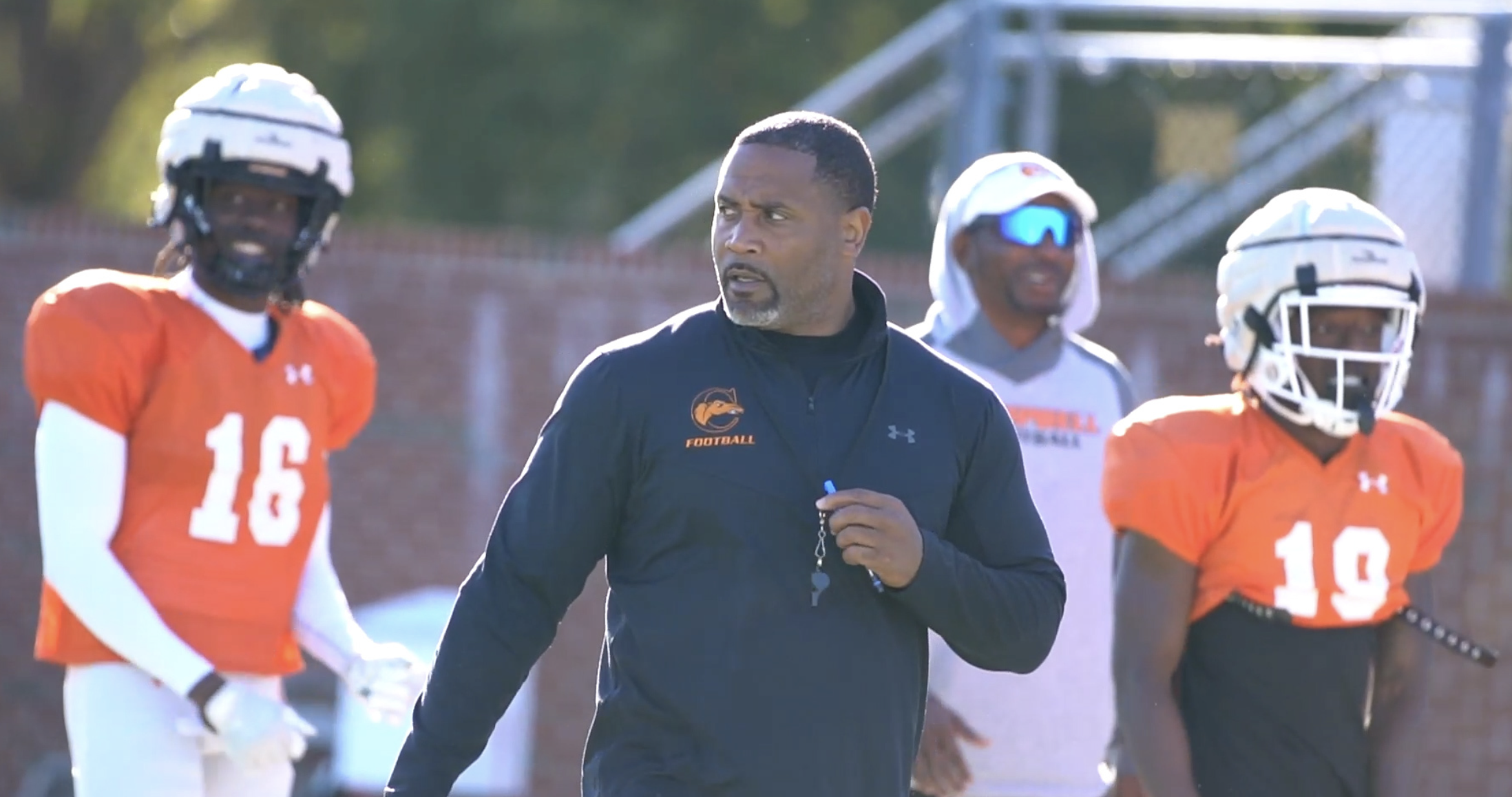 BUIES CREEK, N.C. — Hanging on a wall in the office of Campbell head football coach Mike Minter is a large, framed color print of Muhammad Ali standing over a fallen Sonny Liston during their second fight in Lewiston, Maine, in 1964, For the former Carolina Panthers defensive back, the picture carries personal significance, in part because the former heavyweight champion is his hero.

“He did something nobody else thought he could do. OK, now, I was hoping the first time and you guys think it’s a fluke. So let’s do it the second time, and so when I do it is so, so good, that nobody’s gonna believe that I really did it to you. So get up. Get up,” Minter said, speaking to a visitor about what Ali might have been thinking.

“And that’s the significance of Campbell, right? Think about this, man. We were dead last in Division One football, and now we’re able to do things that nobody thought we could do.”

FIRST TO JACKSON, THEN TO GREENSBORO

In the midst of his 10th season at the small school about 30 miles south of Raleigh, Minter has been on a steady road to respectability. His current team is 4-2, with a 2-0 record in the Big South Conference. But the next two weeks figure to be the biggest in the course of his tenure, and in both instances, an HBCU will be involved and each game will be Homecoming for those schools.

The first game is on Saturday, when the Camels face Jackson State and Coach Deion Sanders. A sellout crowd of 60,000 is expected to watch Sanders and Minter, two former National Football League defensive backs, square off. Sanders is the one with a program glowing in a national spotlight and bringing attention to his HBCU counterparts, and Minter is leading Campbell’s mission lot find their place on the FCS stage. It’s also a pairing of the two best recruiting classes in the division.

On the following Saturday, Oct. 22, Campbell travels about 90 minutes to Greensboro to face North Carolina A&T and the (self-proclaimed) Greatest Homecoming on Earth. Whereas the Jackson State game is a non-conference encounter, the game with the Aggies is a Big South contest with implications for a championship bid and a berth in the postseason.

So what is it about defensive backs coaching college football these days?

“Well, I think DBs always are the coach on the field anyway, right? They say linebackers are but at the end of the day, I think it’s the safeties that naturally see everything is connected to everything,” Minter says. “And the other thing is, most of the time, a team is only going to go as far as a secondary takes it. So now, you’re a motivator, too, just not the leader of the defense. You’re also the motivator that keeps people going and keeps people connected to the culture that the coach is trying to build.”

THE MOMENT ISN’T LOST ON MINTER

And as much as Minter is trying to bring a culture of winning to Campbell, he is keenly aware of the moment of two Black head coaches trying to match move for move in front of a large crowd as well as a national television audience.

“Now, I played in Super Bowls. I’ve played national championship games,” Minter says. “But I’ve never played in a stadium with 60,000 Black people. I’m looking forward to that. That’s what gets me excited.”

The effort to bring this game to fruition began two years ago, Minter says.

“I told my (athletic director), we got to get this game because I saw the significance of what it can bring,” he says. “And then it just so happened that two years later, we’re number one and number two recruiting class. So now, man, people say, ‘Hey, that might be a pretty good game, right?

“And then just the simple fact that Deion was able to see. I believe that he was able to see you got another (NFL) alum out there doing the same thing. Let’s bring some light to what they’re doing too. Right? That’s who he is. Maybe he’s a light bearer. And, and so this is what he’s doing. Everybody now in the Black community is gonna know Campbell University after this game.”

The Jackson State game also holds significance for Camels quarterback Hajj-Malik Williams, the Atlanta native who as a redshirt junior has thrown for 1,395 yards and eight touchdowns.

The one thing Minter will miss in both games is the essence of an HBCU homecoming; halftime. He won’t see the performances by the Sonic Boom of the South or the Blue and Gold Marching Machine, although he will surely hear them during the game itself. So, Minter will have to decide which school did homecoming the best.