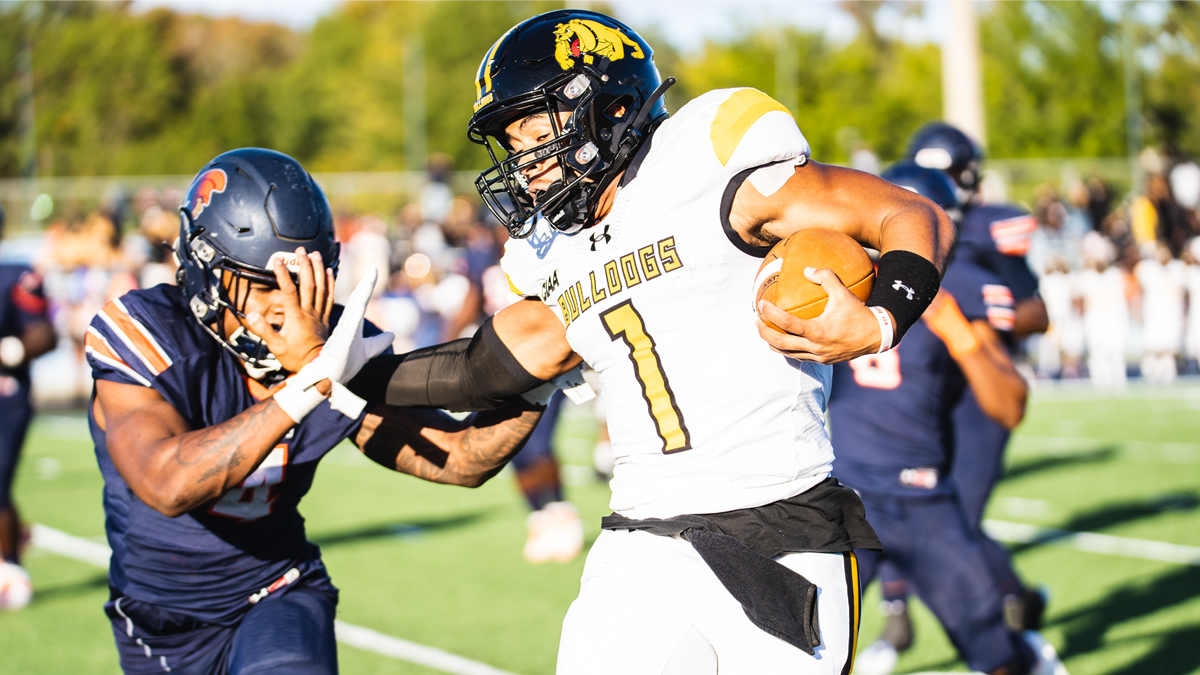 After paying his dues at Morgan State and then again at Bowie State, DJ Golatt is now in the spotlight.

Virginia State fans piled into Rogers Stadium on a picturesque Saturday expecting to enjoy another epic homecoming battle with Bowie State. But DJ Golatt and the BSU offense had other plans.

By the time the second quarter started, Golatt and the BSU offense already had folks inside the stadium planning to make moves as soon as halftime was over. BSU led 24-0 after just one quarter and would cruise to a 41-14 win over the home team. Golatt finished the game 17-for-29 passing for 242 yards, three touchdowns, and no interceptions.

“Our coaches did a great job all week to get us prepared for the week. It was a very important game for us,” Golatt said after the game, with a white towel over his head. “Every game is very important for us. O-line did a great job. Defense, special teams, we just all came together as one and did a good job of winning the game.”

Golatt is a grad student in his last year of eligibility, and he certainly looked the part. He showed poise in the pocket, taking what the defense gave him and picking his spots by using his athleticism when necessary.

DJ Golatt has paid his dues and earned his stripes

He’s back in the role of starter for the Bulldogs, one that he played well during his prep days at Annapolis Area Christian HS under coach Ceasar Nettles before finishing his career at Riverdale High School. He completed his prep career with 6,425 passing yards, 52 career touchdown passes, 1,108 career rushing yards and 19 rushing touchdowns before committing to Morgan State. After redshirting at MSU in 2017, he saw spot duty in 2018 and 2019. By 2021 he was looking for a new home via the transfer portal after getting his degree.

Like many Maryland athletes, DJ Golatt didn’t have to look far.

“One because of the previous head coach (Damon Wilson), we had a good relationship. Also, just because I felt I needed to come home. I had alot going on, and then I was going to grad school and so I needed to find a place,” the Largo, MD native said. “And I just want to change my scenery. There was alot of coaching changes that happened in my last school. And so I just want to go somewhere where I felt comfortable and just expected to play.”

But just because he was coming from an FCS program “down” to Bowie State at the Division II level didn’t mean he would have anything handed to him. The two-time defending CIAA Champs already had the reigning CIAA Offensive Player of the Year at quarterback in Ja’Rome Johnson, so Golatt had to take the backseat once again.

“I’ve been a part of winning cultures before, and so it wasn’t too hard. But at the same time, it was a great learning experience,” Golatt said. “I had a full year just to sit back and learn the game, watch a lot of film, a lot of film every day, and just perfecting my craft. Perfecting my craft is a big thing that I harp on just trying to get one percent better every day.”

Johnson led BSU to the CIAA title and a playoff run in 2021, but his eligibility was up. It was Golatt’s chance to prove to himself and everyone else he could do what he did in high school. Ironically, Wilson left Bowie State to take over at Morgan State. But interim head coach Kyle Jackson saw a lot to like in Golatt.

This spring, he stepped up to the plate and showed great quality and leadership skills that we want in our QB,” Jackson said after the game. “He’s shown growth from the spring through the summer and through fall camp.”

Both Golatt and the team have had ups and downs so far in the 2022 season. It started with a three-touchdown, no-interception performance against New Haven that concluded with a game-winning touchdown pass to Kwincy Hall with nine seconds remaining for a big win. Then came a three-game stretch in which BSU lost back-to-back games and was pushed by St. Augustine’s as Golatt threw more interceptions (four) than he did touchdowns.

The last two games, however, Golatt and the BSU offense have been sensational. Golatt threw for 439 yards and four touchdowns in a 53-7 win over Livingstone. That yardage total was a new school record, breaking the one set by the immortal Amir Hall. Then came the VSU performance, which brought his season total to 1,626 passing yards on the sea­son, which ranks first in the CIAA and 13th in the nation. He is 24th amongst DII in passing efficiency (150.76).

“I’m proud of him. I’m proud of the growth, and I’m looking forward to seeing him grow every week,” Jackson added after the game. “Like I say, we had our bumps in the road, but he never backed down. He comes to work every day with his hard hat on.”

The offense will need to remain in high gear this week as Bowie State takes on nationally ranked Virginia Union in a battle for first-place in the CIAA North. As well as it has been playing, DJ Golatt thinks he and his teammates still haven’t hit their ceiling just yet.

“As an offense I think that we have a lot of ways to go — just trying to still get to learn everybody, still trust in the system and everything,” Golatt said. “So I think that that will come in time.”