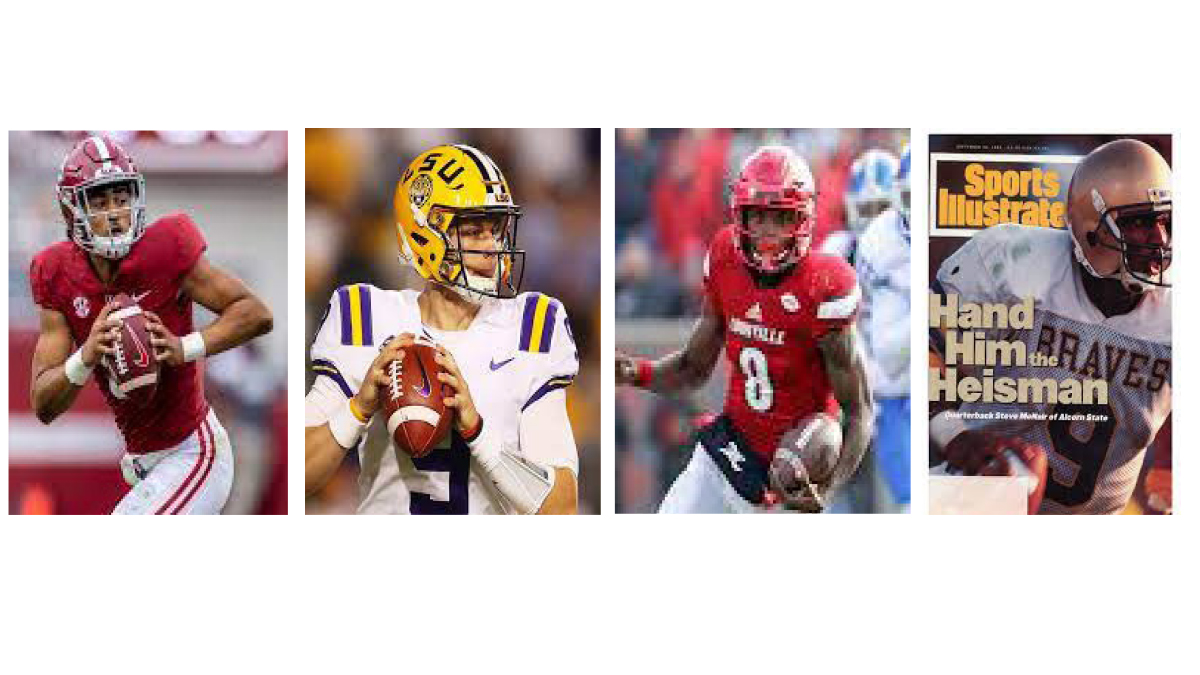 The Heisman Trophy wasn’t handed to (l. to r.) Bryce Young, Joe Burrow or Lamar Jackson. And it certainly wasn’t handed to Steve McNair. Each earned it. Jackson State sophomore QB Shedeur Sanders will have to do the same.

As most know, the Heisman Trophy is awarded annually to the most outstanding player in college football.

Through four games, Shedeur Sanders is certainly building a case for consideration. He is way ahead of other HBCU quarterbacks in passing stats and leads them in passing yards, touchdowns and total offensive yards. But he has not yet garnered the kind of numbers or attention that would make him a prime Heisman candidate.

If Sanders’ current numbers are projected through JSU’s 11 games this season, he would finish with 3,855 passing yards and 38 touchdowns.

Those are impressive numbers but not likely to garner serious Heisman consideration.

An HBCU look back for comparison

The last time an HBCU quarterback got serious Heisman Trophy consideration was back in 1994.

That was the year the late legendary Alcorn State QB Steve ‘Air” McNair passed for 4,863 yards and rushed for another 936 yards while leading the Braves to an 8-3-1 record and an NCAA I-AA playoff berth. The 5,799 yards of total offense he put up that season is still the best in FCS history.

McNair averaged 527.2 passing yards per game in 1994. He had a record six 500-yard passing days that season. He threw 44 TD passes (three more in the playoffs) and rushed for nine more scores. McNair finished third in the Heisman voting behind the winner, Colorado running back Rashaan Salaam and Penn State RB KiJana Carter.

That season, Williams threw for now what would be a pedestrian 3,286 yards and 38 TDs with 18 interceptions.

Also remember, a year ago Alabama sophomore quarterback and Heisman Trophy winner Bryce Young threw for 4,872 yards and 47 touchdowns with just four interceptions while leading the Crimson Tide to the national championship game.

In 2019, LSU senior Heisman Trophy winner Joe Burrow (now of the Cincinnati Bengals) threw for 5,670 yards and 60 TDs while leading the Bengal Tigers to the national championship.

Even in 2016 when Louisville’s Lamar Jackson (now of the Baltimore Ravens) won the Heisman, he threw for just 3,543 yards with 30 TD passes and nine interceptions. But he augmented his credentials with 1,571 rushing yards and 21 rushing touchdowns.

Bottom line is, Shedeur Sanders is not Heisman Trophy worthy yet. He is well on his way but he has a long way to go, including two more years of eligibility.