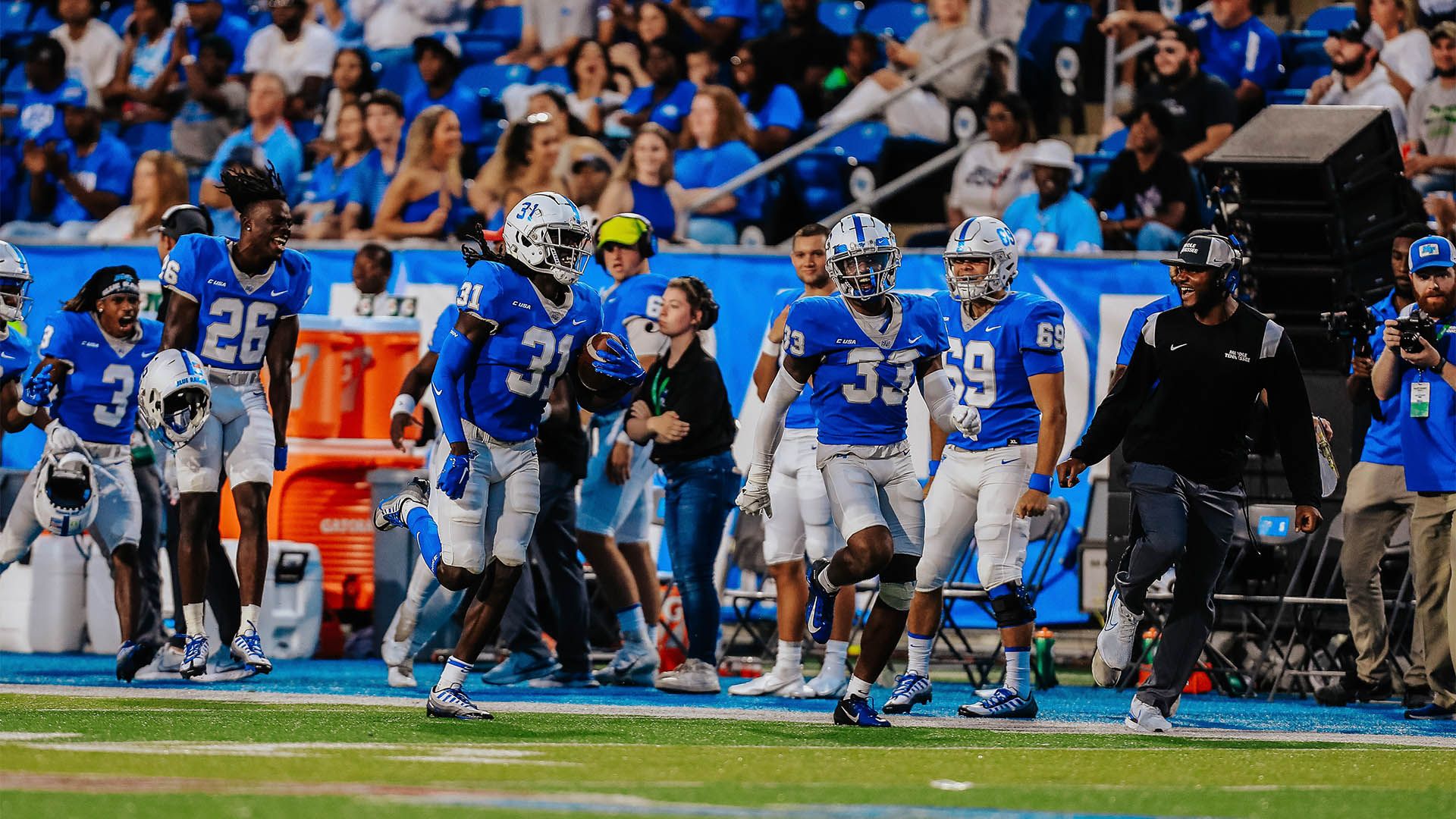 Frank Peasant and Middle Tennessee had an impressive start to the game against Tennessee Stat, scoring a quick 21 first quarter points.

Middle Tennessee had an impressive start to the game against Tennessee State on Saturday evening, scoring a quick 21 first quarter points. They kept that momentum going, ultimately winning 49-6.

Frank Peasant led Middle Tennessee in this one, scoring three touchdowns on the ground. The team’s potent offense accumulated an impressive 435 total yards. The Blue Raiders’ defense was also solid, particularly against the run. They limited the TSU running backs to just 2.3 yards per rush.

Tennessee State struggled from the start, allowing Middle Tennessee to jump to a 21 point first quarter lead. On top of that, Tennessee State’s secondary was an issue. They allowed a concerning 8.5 yards per pass attempt. Jalen Rouse led the scoring for Tennessee State with one touchdown catch.

Middle Tennessee improves their record to 2-1 with the win. The Blue Raiders will hit the road for their next test, a Sept. 24 matchup against Miami (FL). For Tennessee State, it was another weekend of disappointment. They have now lost three games in a row. Thankfully they’ll have extra time to make corrections before their Oct. 1 contest against Lane.

OLD RIVALRY RENEWED: When MTSU left the Ohio Valley Conference and made the jump to the Football Bowl Subdivision after the 1998 season, the record between the two programs was tied at 10-10. The two schools went their separate ways with TSU remaining in the OVC, while MTSU joined Conference USA, and did not meet up again for 21 years. MTSU got the victory in the first matchup against TSU as an FBS opponent in 2019, as they won 45-26. TSU will look to once again even out the series as they meet for just the second time since 1998 on Saturday night.

LAST FBS WIN: Saturday’s game against MTSU will be TSU’s fifth game against an FBS opponent since 2017. The Tiger’s last FBS win came against Georgia State in the 2017 season, as TSU won 17-10. TSU is 1-3 against FBS teams dating back to 2017. The three losses came against Vanderbilt, Middle Tennessee, and Mississippi State.

WEEK 3: BY THE NUMBERS

275: The number of rushing yards that junior running back Devon Starling needs to reach 2,000 career rushing yards. The Nashville native is off to a strong start this season, rushing for 277 yards in two games.

7: The number of players that have 10+ tackles. Senior linebacker Jahsun Bryant leads the team with 18 tackles, followed by Boogie Trotter (15), and Gleson Sprewell (14). Josh Green and K’Vaughan Pope both have 11 tackles, while Bryce Phillips and Michael Crawford have both logged 10.