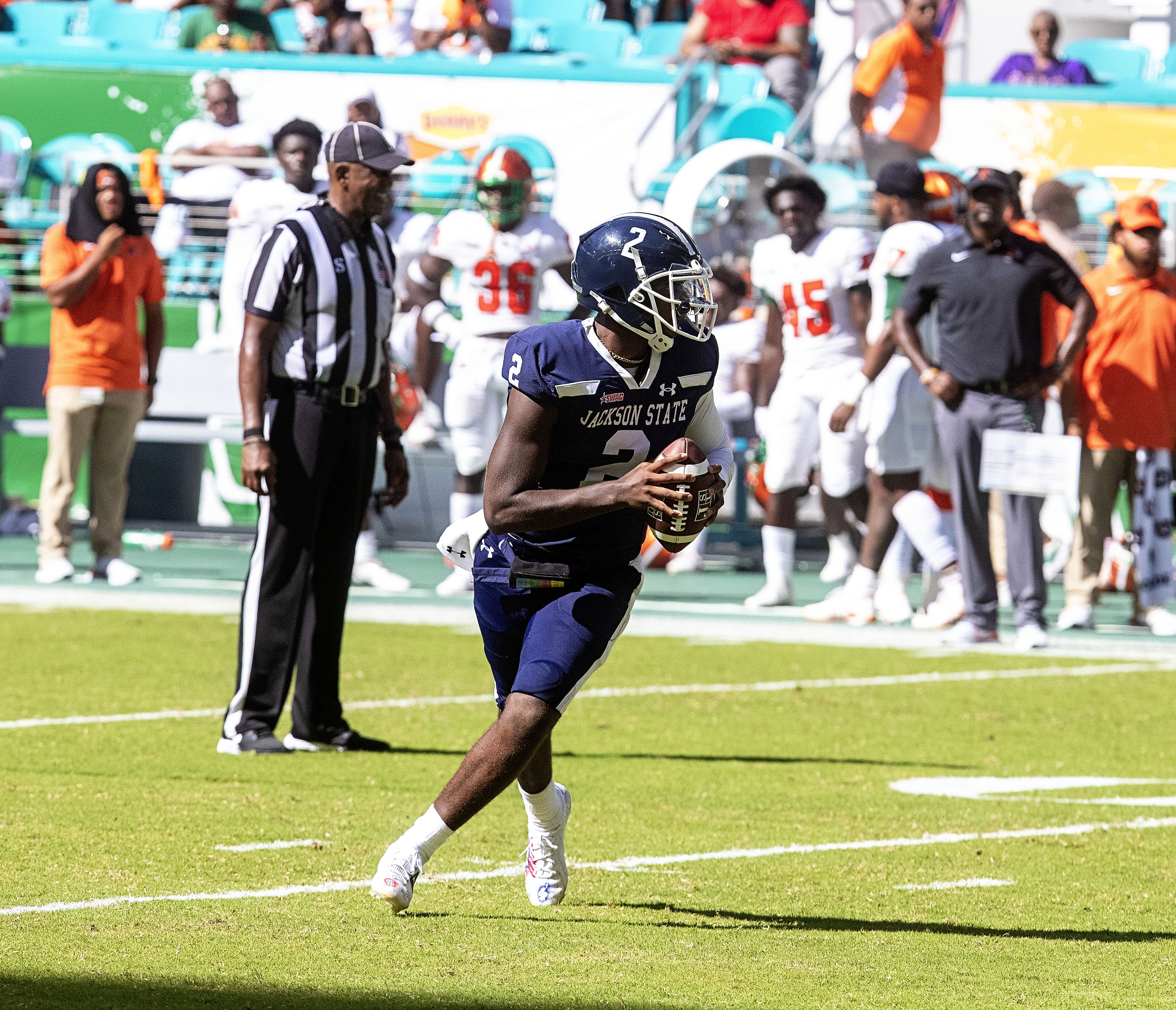 After a tough first half, Jackson State relentlessly attacked Grambling State for an impressive win.

For a while, it looked as though Deion Sanders’ Jackson State Tigers (3-0, 1-0 SWAC) had met their match in Hue Jackson’s Grambling State Tigers (1-2). Iin the end, Jackson State dominated the second half ending with a 66-24 final in the home opener at Veterans Memorial Stadium in Jackson, MS in the WC Gorden Classic.

Jackson State jumped out to a 14-0 lead in the first quarter, followed by two touchdowns from Sy’veon Wilkerson. Grambling would score on a Maurice Washington scampered 73 yards to get GSU on the board.  The GSU defense stood strong against JSU, with Sundiata Anderson getting a sack on Shedeur Sanders, allowing Bryan Powell to scoop and score and tie the game at 14-14 in the first quarter.  This was with over 14:00 remaining in the first half.

JSU head coach Deion Sanders was not pleased with the mental errors and was visibly animated on the sideline.  Sanders’ motto was to dominate and the Tigers were making errors not seen thus far this season.

Sanders settled in and dissected the GSU defense

Shedeur Sanders would settle and lead the offense down the field on a solid drive, connecting with Dallas Daniels for the go-ahead score making the score 21-14. The Tigers would muff the ensuing punt after a defensive stand against JSU which was recovered on the JSU 25-yard line.  The JSU defense then dug in and only allowed GSU to get a field goal out of the possession, making the score 21-17.  The halftime score had the GSU in better position than any SWAC opponent this season.

The second half was all Jackson State.  Sanders hit Daniels for another score on a 28-yard reception, making the score 28-17 early in the third quarter.  For Grambling, this is when the wheels came off.  JSU would card another Alejandro Mata field goal to press the lead to 31-17.

The JSU defense put in work in the second half

The harassing defense of JSU sacked Tiger quarterback Quaterius Hawkins, turning the ball over in the Red Zone.  The next play, Alvin Brumfield rumbled his way into the end zone to expand the lead to 38-17.

Jackson State and Shedeur Sanders would roll from there, including a 15-yard run he took in himself and an 86-yard bomb to Willie Gaines.  The final score would end at 66-24.

The No.1 HBCU team in the country will face the visiting Mississippi Valley State Delta Devils in back-to-back games at Veterans Memorial Stadium.  Grambling State will try to get back on the winning track with a visit to Daytona Beach to face the winless Bethune-Cookman Wildcats.