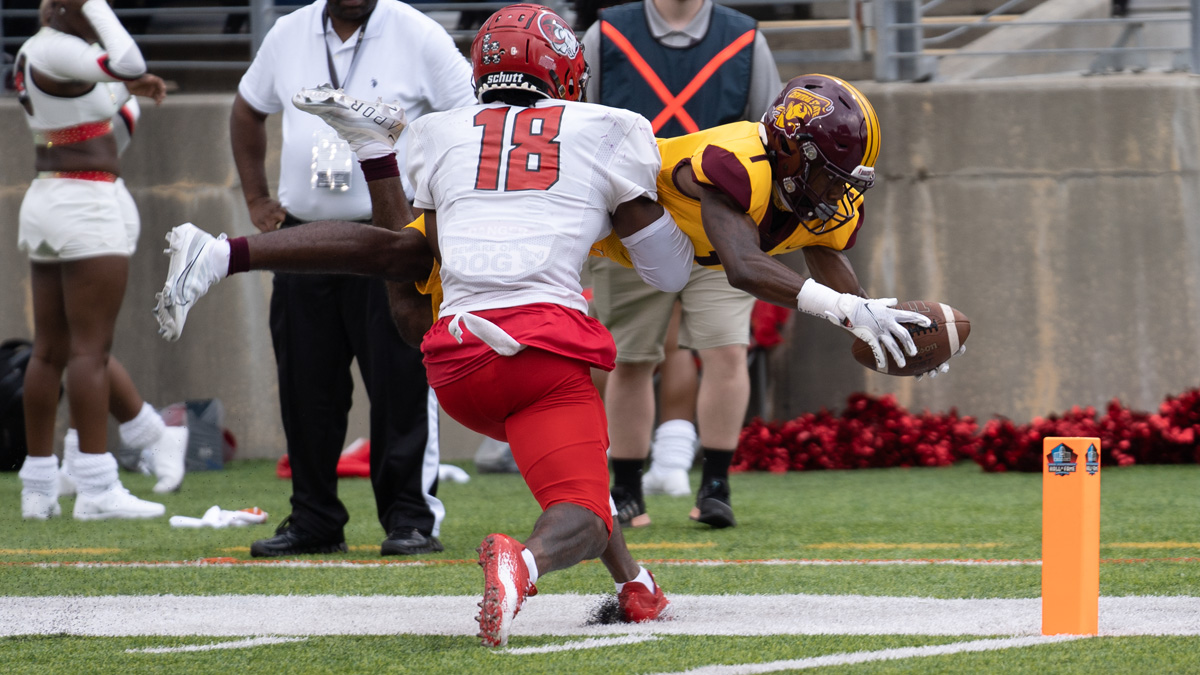 Central State University is hoping a strong football program will lead to more interest as it pushes for growth.

CANTON, OH —You could feel the sense of excitement from Central State University players and fans as the final seconds ticked off the clock in the shadow of the Pro Football Hall of Fame. You could hear it, too.

“Do you know how long it’s been since Central State won a classic?” fans questioned in the stands.

“Do you know how long it’s been since we were 1-0?” players quizzed each other?

The 41-21 win over Winston-Salem State in the Black College Football Hall of Fame Classic was a long-time coming for Central State, which hadn’t started the season 1-0 since 2014. With a new head coach and a team full of new players and on national television (NFL Network) to boot, it certainly felt like the start of something good.

“Proud of our kids, and they’ve they’ve come a long way,” head coach Kevin Porter said in the post-game press conference. “Our program has been down and for those kids to be able to come out — We’ve got over 60 new guys on our football team —  really says a lot about the work that they put in.”

Central State is an institution with a proud past both academically and athletically.

The Wilberforce, OH HBCU was originally a part of Wilberforce University before it split off in the 1940s and became its own independent institution. The school has won national championships in several sports at the small college level, but it is perhaps best known for its powerhouse football program of the 1980s and 90s, which produced two NAIA titles. The football program was shut down in the late 1990s, and has languished at the Division II level with little to show for it in the past few decades.

A year ago it appeared that a new day was dawning. Central State had brought in Bobby Rome, a millennial head coach who played his college football at North Carolina and there was talk of a new day for CSU. It started the season with a classic in its own backyard — the “Classic For Columbus” — but it lost that game and just over a month later, Rome was gone as well. The team won just one game all season, and it was filed away as another season of “the new normal” in Wilberforce.

Dr. Jack Thomas just passed the two-year mark in his tenure as president at Central State. He beamed with pride on the sidelines as the victory was secured in the fourth quarter. Extremely personable, he stopped and took photos with just about everyone on the sideline, including Director of Athletics Tara Owens. The two of them collaborated to bring in Porter, a former NFL defensive back who led Fort Valley State to back-to-back SIAC East titles in 2016 and 2017.

“We have a new team here, a new culture,” Dr. Thomas told HBCU Gameday on the sidelines. “Coach Porter has done a good job in going out and recruiting. We recruited him. We wanted to make sure that we had a great coach with experience and he went out and recruited some of the best and brightest student-athletes. And this is our first time getting to see them display their talents here at the Football Hall of Fame here in Canton, Ohio.

And we got a win here. So it’s this exciting, our first game and first win.”

A productive weekend for CSU

Recruiting was as much a priority as winning over the weekend, according to Dr. Thomas.

“We did have our admissions director and folks here this weekend, and they participated in the recruitment fair. And we have lots of students from all over the state that came and participated and hopefully, we’ll get some of those students,” he said. “We made scholarship announcements right there on the spot to those high-achieving students. And we want more students coming to our university.”

In theory, having a winning football program helps with that.

Central State will have to replace Owens, who is headed to take over as AD at Maryland-Eastern Shore. But Sunday’s win has everyone feeling optimistic about what the future holds.


Malik Johnson has been with Central State since 2019. The Atlanta native couldn’t contain his excitement when talking about what Porter has brought to the program.

“I knew that “Down south” football —  I knew it was going to come up here. And this is what they brought us — smash mouth football,” Johnson said after the game. “He brought a lot of guys that can play. They just brought a lot of great talent, got everybody together and we’re gelling. We’re still stacking days.”

Porter has been around the game long enough to know that one win doesn’t make a season — but for a school like Central State looking to find something to spark a new wave of football success, it can go a long way.

“I’m happy for our program. I’m happy for our fans. I mean, it’s one game, but it is a big game,” Porter said. “I was just informed that we hadn’t won a classic game in a while. So for us to be able to come out here on this stage, have our kids perform well and win the football game is huge for us, huge for our university.”