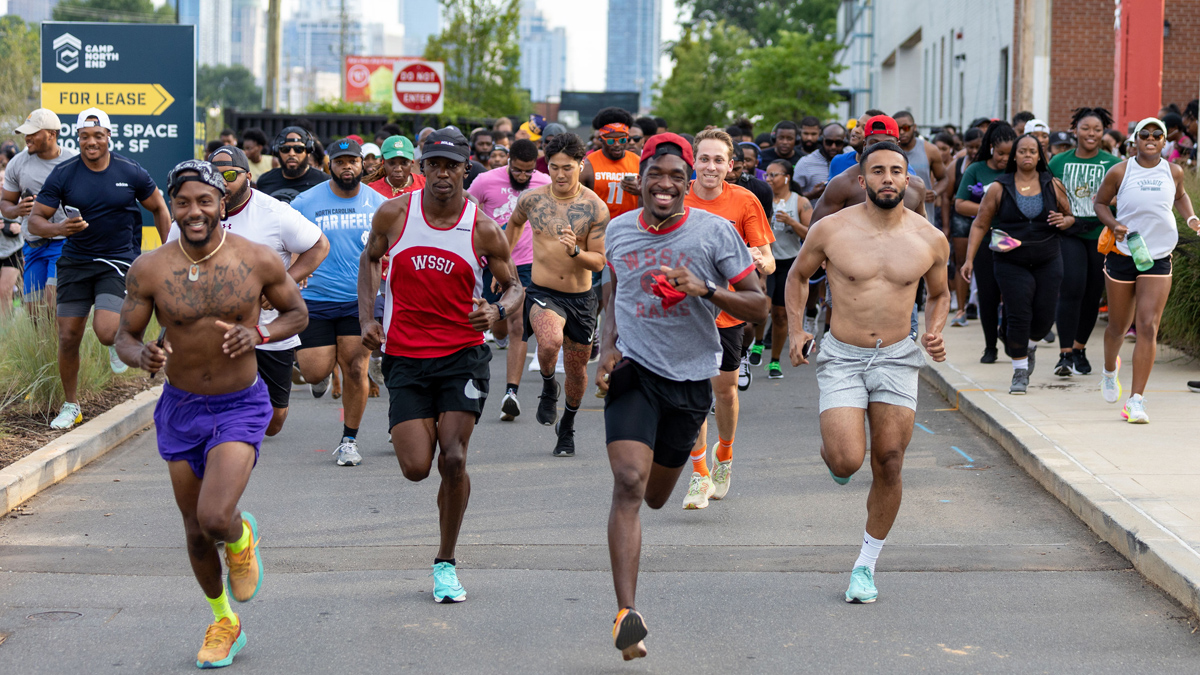 The Winston-Salem State alumnus and former track athlete says he found himself sitting around a little too much for his liking as he approached his 30s. So he decided to do something about it and rallied a few friends to stay accountable in early 2019.

“I started doing a mile a day,” Jones said. “They joined me for a week, a month at a time, and at the end of the year, I had like 30 or 40 people doing it with me entering into 2020. Then the pandemic hit. So I decided we needed something to do together. So then I started Mad Miles Run Club and we just started to just challenge each other every single Tuesday. And it grew into this.”

This is Mad Miles. It’s a full-fledged exercise movement led by Black millennials — many of them HBCU graduates like Jones — exploding in Charlotte like televangelists in the 1980s. But just like HBCUs are more than just houses of learning, Mad Miles is more than just a run club. It is a community built around the pursuit of health and fitness, but not limited to just running.

The club meets twice a week — Tuesdays are at Camp Northend in the shadow of Uptown Charlotte. Participants scan a QR code and sign a waiver — then the party begins. A DJ plays hip-hop and R&B while runners gather to chat and stretch as the walkway fills up. Jones keeps the energy going, greeting participants with dap and a smile as hundreds file into the space. It’s easy to see why he was Mr. WSSU during his time in college.

“So anybody who comes to Mad Miles, feels at home. I don’t care for your first time or your 10th time, you’re going to feel like you’re right at home. You’re going to dance with us. We’re going to teach you the dances right here. When you get out here, you’re going to have a good time. So that’s where I started the family atmosphere. Our volunteers are amazing. It’s not just me. I like to tell people all the time I started it and everybody else took it and they just made it into what it is.”

This late August evening the marching band from nearby Harding University pulls up just before the run and puts on a show for the Mad Miles crowd. Micro scholarships will be awarded to some of the band members while school supplies are being collected by Big Wave Family, a non-profit run by another WSSU alumnus.

“Community is not just our community, it’s the younger community that’s coming out,” Jones said. “That’s one thing I love about Mad Miles. You can come out here and see kids in strollers. You can see a three-year-old just learn how to run. Active 20-year-olds, 30-year-olds, 40, 50, 60. It’s all over the place. And that community, we have to help each other right?”

The run starts at 6:30, with a sendoff from the marching band. A stream of people passes through, some walking while others run. Jones estimates there are 600-650 people in the crowd tonight.

While the majority of the runners are black and brown, not all of them are. Sam Hyman, a transplant from nearby Monroe, was looking for something when he moved to Charlotte in 2021. He didn’t know what, but he’s apparently found it at Mad Miles.

“It’s a beautiful thing when you show up somewhere by yourself because you show up with an open mind,” Hyman said after Tuesday’s run. “I was shown so much love as soon as I arrived from the jump. And I knew right then and there this would absolutely blow up and it did. It’s grown. Absolutely. It’s grown tremendously over the last year.”

Throughout the mile-long lap around Camp Northend, volunteers are strategically placed to stand and cheer on those along the path. They provide encouragement and energy to push through and keep going. It’s a powerful experience to see hundreds of black folks running together, not for a game or a medal or out of fear, but out of a desire to push themselves and be a part of something bigger than themselves.

Every single week on Tuesday and Saturday you know, if you come to Mad miles, you got people cheering you on that will help you get your goals, reach your goals. And then we have races as well that we do Around The Crown 5K, Charlotte Marathon. So we go out to those places and we represent our community,” Jones said.

“There’s not a lot of African-Americans out there at all, but that’s something that I want Mad Miles to do. I want us to go out there and change that perception a little bit and then have that community as well. So you feel like you have a whole team behind you when you step to the line. It’s not just you. It’s the Mad Miles on your chest, and it’s the 500 people that come out here every single Tuesday that’s right behind you.”

Like many people, Gabrielle Jones stumbled upon the movement on Instagram. She said she wanted to come, but was hesitant to come by herself — but eventually, she did and she’s getting a lot out of it.

“Community and I would definitely say professional development,” Jones said, wearing a UNC Charlotte shirt. “Just being able to talk to people that what you do and then seeing what they do and how that fits into what you might want to do one day.”

Jones said she wasn’t running at all prior to joining Mad Miles, but she’s turned the corner pretty fast.

“I wasn’t exercising at all,” she said. “So I would definitely say coming out here has promoted health for me and just being able to run and then increase my endurance. To be able to run a half a mile, then be run a whole mile and then hopefully one day I’ll be able to run two.”

HBCUs will take center stage in Charlotte next weekend when North Carolina A&T and North Carolina Central face off in a football game at Bank of America Stadium on Sept. 3. Before the two arch-rivals square off on Carolina Panthers’ home field in the Duke’s Mayo Classic, Jones and Mad Miles will be a part of an “HBCU Pride Run” at Camp Northend.

“It’s going to be amazing. We’re starting off with an HBCU run at 10:00 AM in advance of the Around the Crown 10K Symposium. So it’s going to be a great time,” Jones said. “We have people out here representing their colleges. We’re going to have some bands out here. We’ll have some cheerleaders out here. And when I tell you, it’s just going to be a Saturday run — times 10 — you need to pull up.

If you didn’t go to HBCU, that’s fine. Represent your favorite one and come have a good time.”