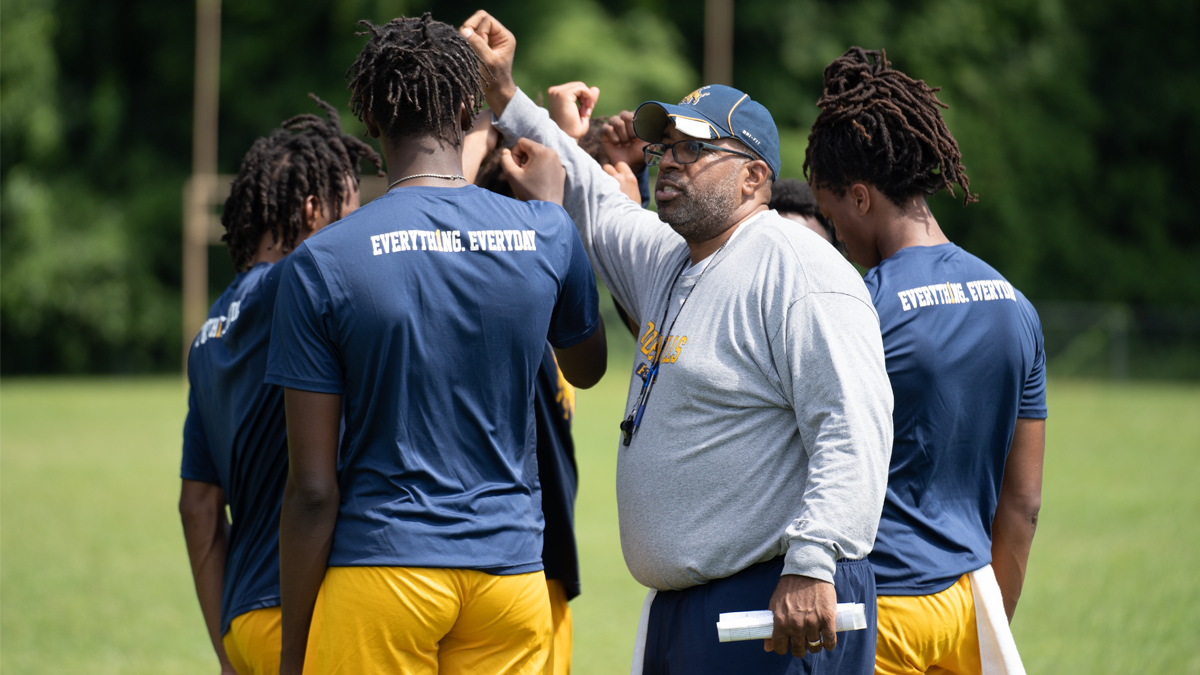 The CIAA South has had movement at the head coaching level as well as a shuffling of assistants since last fall.

The CIAA football offseason has been very busy for member schools. The offseason has brought significant changes to coaching staffs. The conference now sports three alumni who are in head coaching positions for their alma maters, along with several other head coaches who have prior coaching experience within the conference. The changes now amount to a CIAA that may see more parity this season than it has in prior seasons.

Here’s how things changed in the CIAA North.

A rundown of the significant changes that have occurred in the CIAA South since last season is as follows:

The Golden Bulls’ football program will enter the 2022 season with Kermit Blount out as head coach, and Maurice Flowers taking the helm.  Flowers is no stranger to the CIAA, as he himself graduated from JCSU after playing quarterback for the football program. Flowers’ coaching career involves multiple stops at CIAA schools, and having extensive success as a coordinator.  Flowers’ body of work includes developing quarterbacks who have led the CIAA in passing such as JCSU’s Ryan Carter in 2010 and Shaw’s James Stallons in 2012.  He also coached former JCSU QB Keahn Wallace to the 2011 CIAA Offensive Rookie of the Year honors, directed Miles’ offense to a SIAC Championship in 2015, and guided Fayetteville State’s offenses to CIAA Southern Division titles in 2017 and 2019.

Flowers left Fort Valley State after directing the Wildcats to a 7-5 record in two seasons.    Flowers did not retain DC Johnson “Jeep” Hunter, and instead enticed Barry Tripp to follow him from FVSU to Charlotte. Tripp, a former defensive lineman at WSSU, was the DC at Fayetteville State in 2019 before moving to FVSU.

DB Coach Chi-Emeke Worthington: A JCSU graduate himself, Worthington returns to JCSU after a two year stint at UNC-Pembroke in the same capacity. He was instrumental in developing the Golden Bulls’ strong defensive secondary during his tenure, including developing all-CIAA and record-setting DB Carlo Thomas.

Head coach Adrian Jones will open the season without former OC Manigo, who has the same position at Virginia State.  Receivers coach Toryeon Hester will now call plays. Hester has been on staff since Jones has been at Shaw, so this promotion should provide some continuity in the program. DC Gilbert Wiggins continues in his position.

A new year for head coach Richard Hayes brought along another search for an offensive coordinator. Since 2017, the Broncos have opened the season with someone who didn’t call plays the prior year.  This time, offensive coordinator Howard Feggins enters the role after being an offensive coach at Colorado State-Pueblo.  He coached some of DII’s top running backs in a run-heavy scheme for the Thunderwolves, and that knowledge bodes well for a Broncos program that favors a running back by committee approach. Last year’s OC, Calvin Randall, is now the quarterbacks coach and recruiting coordinator. DC Dominic Anderson returns for another season guiding the defense.

WSSU’s biggest news was that the administration removed the interim tag from HC Robert Massey’s title.  He now has a four-year contract. Massey retained former WSSU quarterback-turned-OC Kameron Smith; however, the coaching staff faced several changes beyond that position. Markus McElveen is now the DC after coaching at the high school level. He was a former All-CIAA offensive lineman for Shaw. OL coach Chris Holmes joins the staff after having the same role at Fayetteville State for the past five years.

Livingstone’s offense struggled last year, so much that second-year HC Sean Gilbert opted to replace pieces of his offensive staff. Chiefly, new OC Marcus Crandell will lead the Blue Bears’ offense. Crandell is a former Canadian Football League quarterback, and was a quarterback at East Carolina.  Prior to his appointment, he was the offensive coordinator for the University of Saskatchewan and had other quarterback coaching stints in the CFL. Crandell may be able to help an offensive unit that was shut out three times in 2021.