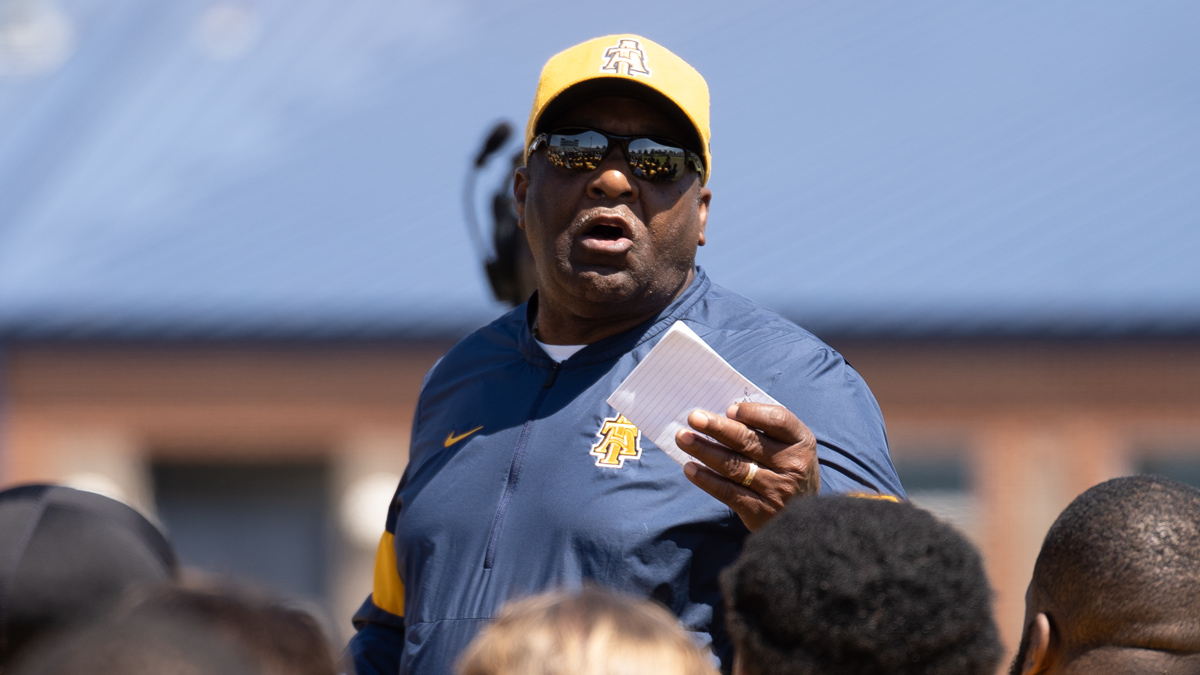 North Carolina A&T football experienced a big drop-off its first season in the Big South. But it isn’t expected to stay down for long.

CHARLOTTE — Sam Washington will be the first one to tell you that North Carolina A&T football had a disappointing 2021 season. The 5-6 record was the program’s worst in a decade as it entered the Big South Conference.

One big reason for the drop in Washington’s eyes was a lack of discipline.

“We’ve got to have discipline as a team,” Washington told HBCU Gameday at Big South Media Day. “We were not a very disciplined team last year, and the importance of being disciplined was a big standout for us. I have this old saying no excuses, no regrets. And we had too many excuses. You know, we just did not get it done. Most times it is something that we could have done differently. That’s what makes it heartbreaking.”

Thankfully for Washington and A&T football, 2021 is now in the rear-view mirror while 2022 is just around the bend. And despite last season’s disappointment, expectations are again high for the program. A&T was picked to finish atop the paired-down version of the Big South Conference.

“I would say rightfully so because we will bounce back if you want the truth, this is common ground for us,” Washington said. “Outside of last season, the last seven years, were picked to win and we were able to do so. So, you know, it’s just another day in the office.”

The Big South has lost three programs from 2021 — Kennesaw State, Monmouth and Hampton — all of whom beat North Carolina A&T last season. Monmouth and Hampton have joined the Colonial Athletic Association — the same conference that A&T football will call home for football starting next season.

But first A&T has to get through this season, which includes a high-profile but challenging non-conference schedule including FCS football’s greatest dynasty — North Dakota State.

“They are a special football team. They’re not average by no stretch of the imagination,” Washington said. “We set out to measuring ourselves, where we are, compared to those national championship teams. And we got what we asked for. No doubt about it.”

That measuring stick is an important one. Should A&T football live up to the expectations of Sam Washington and his fellow Big South Conference coaches, A&T would make its first appearance in the FCS Playoffs since 2016.

Former A&T head coach Rod Broadway stated after A&T won the inaugural Celebration Bowl that it wasn’t appropriately funded to compete for a national title. Half a decade later his former defensive coordinator-turned-head coach may have the opportunity to see whether or not it has changed.

“We’re about to find out,” Washington said. “So we would like to think that we can. But being a realist, there’s a ways to go still. But I think it’s very important to find out where we are and how we fit into the scheme of things and I’m excited for the opportunity, but first things, first. We gotta win the conference and then see where it takes us.”