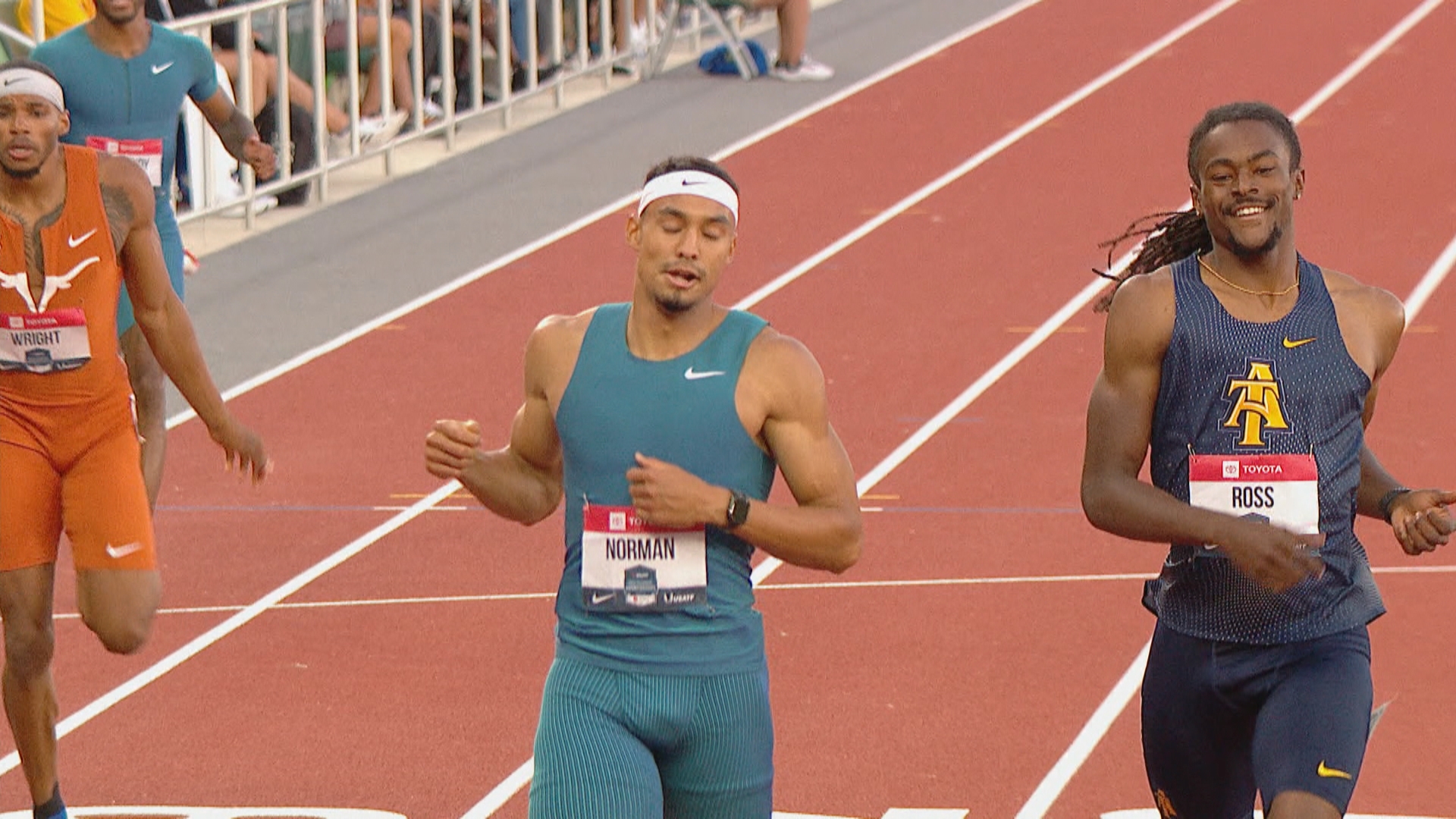 HBCU tracksters come up short at US nationals

Michael Norman (l.) and NC A&T junior Randolph Ross Jr. (r.) after they finished 1-2 in one 400 meter semifinal. They will meet in the 400 final Saturday evening at the U.S. Outdoor Track & Field Championships in Eugene, Oregon.

HBCU track athletes were nearly shutout as the US Outdoor Track & Field nationals moved through most semifinal rounds and contested a few finals Friday in Eugene, Oregon.

The top three finishers in the event finals make the U. S. team and will represent the country at the World championships back in Eugene in three weeks.

NC A&T junior Randolph Ross Jr., who repeated as 400 meters champion two weeks ago at the NCAA Div. I Outdoors, advanced to Saturday’s 5:31 p.m. 400 final. Ross was the lone HBCU athlete to earn a spot in a final.

He ran 44.36 in the first 400 meters semifinal to finish second just behind reigning U. S. champion Michael Norman’s 44.28. Nike’s Bryce Deadman was third behind Norman and Ross in the first heat in 44.95.

Georgia’s Elijah Godwin, who finished third at the NCAA Outdoors, won the second semifinal in 44.66. Florida’s Champion Allison, who was the runner-up to Ross at the NCAAs, was second in the last heat in 44.80. The five were the only runners to run under 45 seconds.

Another HBCU track athlete advancing at the US Outdoor Track & Field nationals was NC A&T senior Paula Salmon who finished second in her first round 100 meter hurdles heat. She ran 12.76 seconds to finish behind Keri Harrison of adidas. The top four in each heat and the next four fastest advanced to Saturday’s 4:04 p.m. semifinals.

Salmon’s time was the 12th best of the 16 that advanced to the semis.

None of the three former NC A&T sprinters in the women’s 100 meters semifinal nor the Aggie in the men’s semis advanced to the final. The top three in each of two heats and the next two fastest advanced.

Adidas-sponsored Cambrea Sturgis finished seventh in the first women’s 100 meters heat in a time of 11.04 seconds. Nike’s Kayla White ran 10.99 and Symone Darius 11.20 to finish sixth and eighth respectively in the second heat.

Former A&T sprinter Christopher Belcher, now running for adidas, also came up short in the men’s semis. Belcher was seventh in the second heat in 10.15 seconds. All eight of the men who advanced to Friday’s 10:21 p.m. final ran under 10 seconds led by Fred Kerley’s 9.76, the fastest time ever run on US soil. Kenny Bednarek of Nike grabbed the last spot in 9.95.

Kerley later won the final in 9.78 with Marvin Bracy-Williams second in 9.85 and Tryvon Brumell third in 9.88.

It was incorrectly reported Thursday that NC A&T senior Delecia McDuffie’s 51.87 sixth-place finish in the first round was not fast enough to advance. She however did advance on time. Her competition ended in the first of two semifinal 400 heats Friday as she finished seventh in 51.82.

Howard senior Jessica Wright finished seventh in the first 400 meters hurdles semifinal in 57.09 behind dominant world-record holder Sydney McLaughlin’s 52.90. The best finishes behind McLaughlin did not break 55 seconds. Wright is out.

NC A&T senior long jumper Brandon Hicklin fouled in his first two attempts and only jumped 7.68 meters (25′ 2.5″) on his third attempt. The distance placed him 14th. He needed to be in the top ten to advance to the US Outdoor Track & Field nationals finals.

First up Saturday for HBCU track athletes will be the first round of the men’s and women’s 200 meters. NC A&T sophomore Javonte Harding is in the men’s competition that gets underway at 2:45 p.m. ET. Harding, the NCAA 200 meter indoor champ, is in the fourth heat.

The women’s 200 opening round is up next, starting at 3:10 p.m. Sturgis, White, Symone Darius and A&T sophomore Jonah Ross are in the field. Former Livingstone and current Nike runner Quanera Hayes is also running in the 200. Hayes is in the first heat. Darius and Sturgis are in the second heat. White and Ross go in the fourth heat.

The men’s 110 meter hurdles first round with former A&T athlete Michael Dickson in the field begins at 3:35 p.m. Dickson is in the second heat. The final two rounds of the men’s 110 hurdles are Sunday with semis at 4:04 p.m. and the final at 5:54 p.m.

HBCU tracksters come up short at US nationals