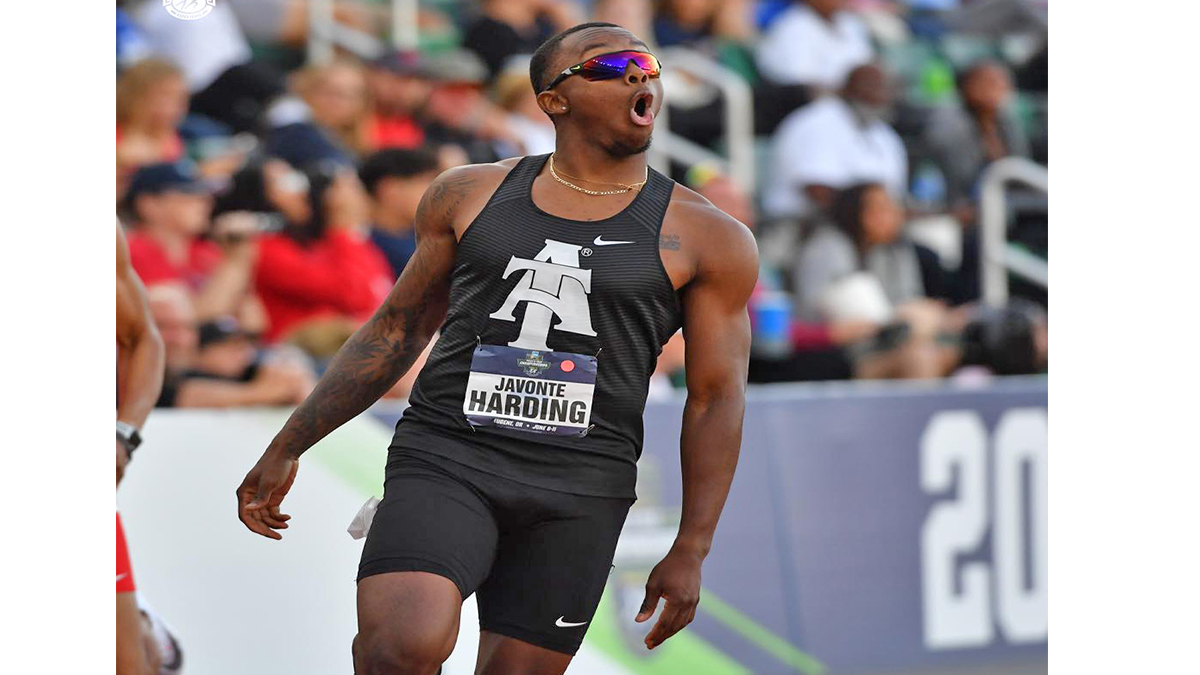 NC A&T sophomore Javonte Harding reacts Wednesday at the NCAA Outdoor Track & Field Championships after his day’s-best time of 19.98 in the 200 meters was posted. It was the best time of his career but it did not stand.

NC A&T took several steps towards winning the men’s NCAA Div. I Outdoor Track & Field Championships in Wednesday’s semifinal round. The Aggies also had a couple of huge missteps.

A&T Sophomore sprinter Javonte Harding also advanced in the 100 meters. He finished second in the third heat of the event in 10.23 seconds to advance to Friday’s finals. His time was the ninth fastest.

The Aggies also got their first points in the only finals competition in which they competed Wednesday. Senior Brandon Hicklin finished fifth in the long jump. His leap of 7.86 meters earned four points.

The first misstep, literally, came in Harding’s 200 meters race. Harding won the second of three heats with the fastest time of the day of 19.98 seconds. It was the fastest time he has run in the event in his career. He was disqualified however as officials ruled he took several steps out of his lane as he ran the turn.

NC A&T head of track & field programs Duane Ross filed a protest. The disqualification was upheld. Harding’s DQ knocked the Aggies out of what were likely to be some much-needed points.

Other Aggies also did not advance.

Senior Cory Poole, for an undisclosed reason, did not start in the 400 meter hurdles. Junior Aveon Reid ran in the third 400 meter hurdles race where Poole was to compete. Reid finished sixth in his heat in 52.02 seconds and did not advance.

Aggie senior Rasheem Brown also did not advance in the 110 meter hurdles. He finished fifth in his heat in 13.58 seconds.

He failed to advance in the 100 meters after finishing eighth in his heat with a time of 10.30 seconds. In the 200 meters, he did not advance after a sixth-place finish in his heat in 20.75 seconds.

The top two finishers in each of three heats in the running events advanced. The three next fastest times also made it into Saturday’s finals.

Tennessee got 15 points in the long jump to lead after Day 1 with 21 points. Daniel Pinnock won the event (10 points) and Carey McLeod finished fourth (5 points).

Jeremiah Davis of Florida State finished second in the long jump to earn 8 of the 16 points the Seminoles scored. FSU is in second place after Day 1.

A&T’s 4 points are tied with four others (Baylor, Northern Iowa, Stephen F. Austin and Campbell) for 20th place after Day 1.

Results of all Day 1 events are here: