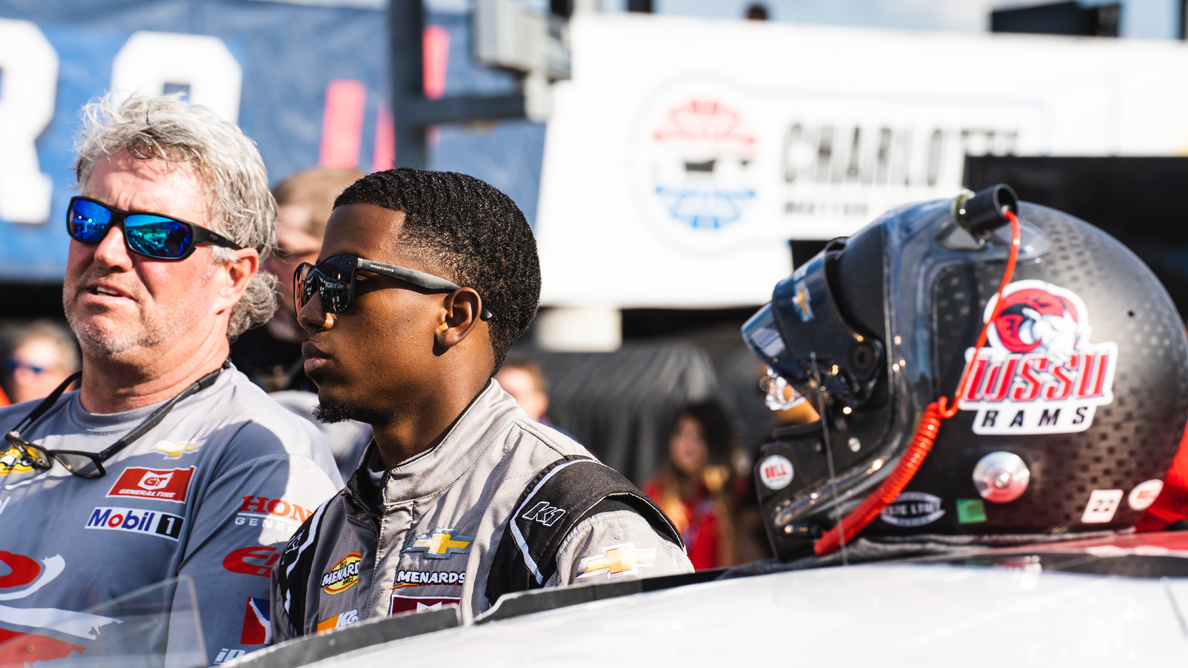 Rajah Caruth got off to a hot start before a bump up impacted his Winston-Salem State University themed car.

CONCORD, NC — Rajah Caruth gave Winston-Salem State and HBCU supporters a lot to cheer about but a fender bender and a mishap with a teammate derailed his hopes for a win in the General Tires 150.

Caruth finished third in his WSSU themed car, but led for much of the first half of the ARCA Menards race. But a bump-up with his Rev Racing teammate Nick Sanchez on the 45th lap damaged his car sent him to pit road.

“It’s my fault. I ruined a company day when we brought two really fast race cars,” a disappointed Caruth said after the race. “So I feel bad about that. I don’t even know what the points are, but this felt like that one. We gave it up — gave one away there. But that’s part of it.”

He would briefly regain the lead in the second half, but sustained damage to his car as well as changing track conditions cut that short. Brandon Jones ultimately took home the win while Caruth finished just behind Corey Heim.

“I was surprised as to how much it changed with how the sun hit it (the track),” Caruth told HBCU Gameday. “And I was like so tight when the sun got out. But once it cooled off and that went away — I was kind of surprised how that happened. Because we started off so good and then towards the end it just went away.”

Despite his disappointment of the result, Caruth’s impact on the event was very visible. There was a contingent of WSSU supporters cheering him on in the stands while members of the NASCAR Diversity Internship program greeted their fellow HBCU student on the track. He took photos and signed autographs before the race.

Rajah Caruth acknowledged it was special to have his school on his race car, but it would have been even better had he won.

“Definitely wanted to get to win, but part of it — I messed up pretty bad, off-turn for one of my teammates. So lessons learned. You got to put a whole race together to be able to celebrate. And I didn’t do that today, so I got some work to do to get ready for Iowa in two weeks.”