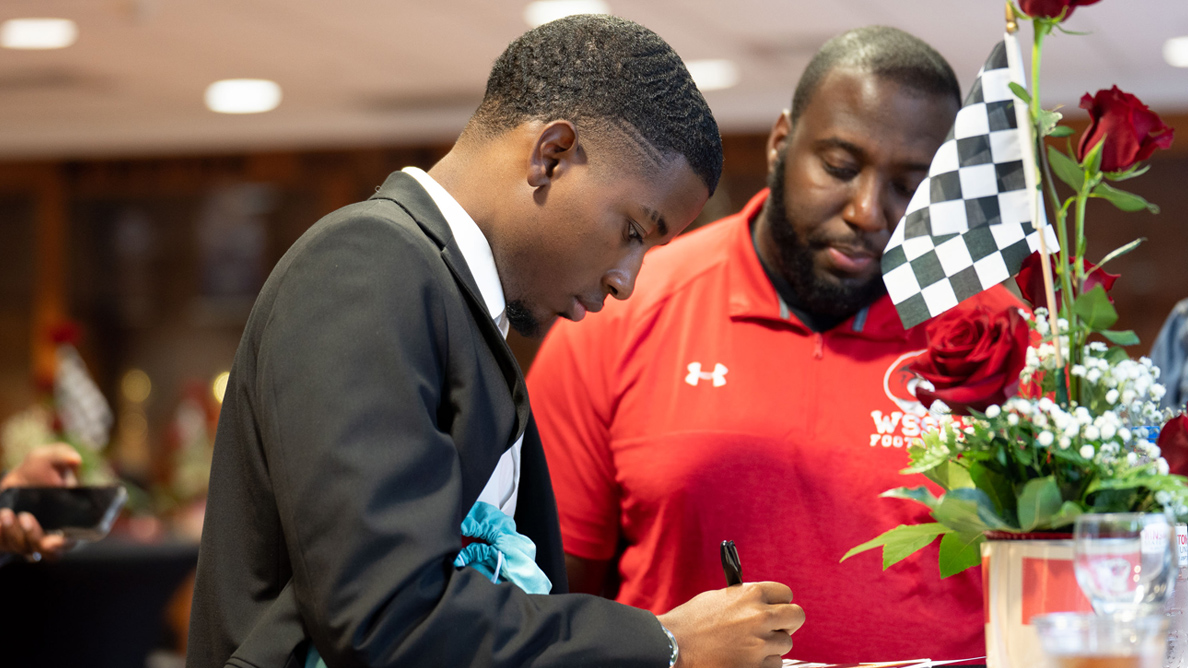 Rajah Caruth is making a name for himself in NASCAR, but he’s happy to bring his HBCU along for the ride.

Rajah Caruth hasn’t had the conventional HBCU experience, but the 19-year-old NASCAR driver is clearly excited about representing Winston-Salem State University on his car this weekend.

Caruth will drive a WSSU themed car on Friday at Charlotte Motor Speedway when he competes in the General Tires 150 as a part of the ARCA Mendards series.

“I’m really excited to drive the Winston-Salem Rams race car this weekend at the General Tires 150,” Caruth said at a donor reception dinner given in his honor at WSSU. “I mean, I have my school all my race car and it being an HBCU, it means a lot. And I’m just really excited to get going.”

The son of Howard University professor Dr. Roger Caruth, Caruth entered WSSU already participating in the NASCAR Drive For Diversity program. He lives about 45 minutes outside of Winston-Salem in Concord, the same city where he will be racing on Friday. Since he arrived in the middle of the pandemic in 2020, even taking classes in-person took a while. But he’s gotten to experience a little more of the school and he’s been enjoying it.

“Having classes on campus is the best. This semester was a lot of fun. I made a lot of friends and a lot of fun memories. So my experience here has been amazing. So far as a student. And things have been very low key, which is how I like it. And like I said, to represent my school on the race track, hopefully not for the last time is just means a lot.”

Of course, unlike any of his other classmates, Caruth’s higher education courses included driving at high speeds on race tracks during the weekend. He currently drives in both the ARCA Menards series and the NASCAR Xfinity Series.  Caruth said the racetracks are similar, but and the cars are harder.

“They’re not impossible, but the whole — everything else — concerning it is a whole lot bigger,” Caruth said. “Even to like pre-race ceremonies and kind of the run of show at the races it’s really on 10 compared to the ARCA races and late model stuff. So that’s been the biggest thing that I’ve had to get used to. And honestly being in the car has been the least stressful part of all of this.”

Rajah Caruth will climb into his WSSU themed car on Friday hoping for his first win in the ARCA Menards series — which he is currently tied for the points lead in. But on Tuesday he smiled, shook hands and took pictures with faculty, staff and supporters. He also signed autographs for some children as well as some more seasoned fans of his.

“It means a lot to receive the recognition from from my uncles and aunts,” Caruth said with a smile. “It means a lot because they’ve seen a lot. And so to to see them be willing to support me and for them to tell me that they are honored by what I’m doing to represent the school — that means a lot personally.”