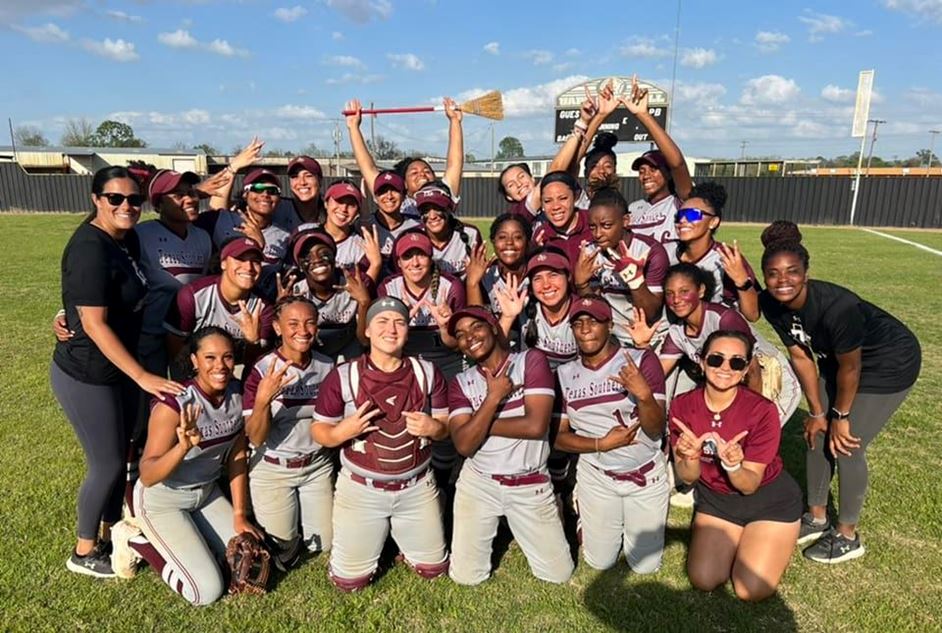 PINE BLUFF, Ark. – For the 12th year in a row, the SWAC Western Division softball title will remain at Texas Southern as they swept Arkansas-Pine Bluff on Saturday.

TSU once again wasted no time in generating offense as Daryn Haslam drove in Ashling Shahan in the first. Jordan McClain’s two-RBI single in the second upped the lead to 3-0 as Pamela Richardson and Crimson Davis both scored.

Tevanae Tate’s two-run homer scored Mila Rodriguez in the third as TSU led 5-0 after the top of the third. Daryn Haslam moved the score to 7-0 after a two-RBI single followed by Mila Rodriguez’s RBI single and Tierrah Willams’ RBI triple as the lead grew to 9-0. Pamela Richardson’s two-RBI double moved the lead to double digits as TSU led 11-0.

UAPB crossed home a run in the fourth but that would be its only score as TSU recorded the run-rule.

Richardson led TSU with a 3-for-3 performance as she drove in two RBI and scored a run. Shahan, Rodriguez, McClain, Williams and Haslam all had two hits while Haslam, Richardson, McClain and Tate all drove in multiple RBI led by three from Haslam.

Lailah Bell struck out three and allowed only one run as she went the distance on the mound.

TSU 9, UAPB 5
TSU overcame a one-run deficit with six runs over the final four innings as they closed out the series with a 9-5 win.

Tierrah Williams started the scoring off with a two-RBI single as Daryn Haslam and Jordan McClain both scored for the 2-0 lead in the first inning. Pamela Richardson’s RBI single moved TSU ahead 3-0 as Mila Rodriguez scored.

A two-run homer in the bottom frame drew UAPB to within 3-2. They would eventually take a 4-3 lead on a two-RBI double in the second.

TSU opened with a leadoff double from Richardson in the fourth before eventually tying the game at 4-all on a fielder’s choice. An Ashling Shahan bunt scored Ja’Lynn Swiney for a 5-4 decision followed by McClain’s RBI single as TSU led 6-4. Shahan and McClain’s RBI’s in the fifth moved TSU ahead 8-4 but UAPB closed to within 8-5 on a run in the fifth. However, TSU would hold them scoreless from that point as Swiney would score on a UAPB error in the seventh.

Shahan led TSU with a 3-for-5 outing with two RBI while McClain, Davis and Richardson all had two hits. McClain, Williams and Swiney also had multiple RBI followed by Davis’ two runs.

Nora Rodriguez improved to 4-2 as she struck out five in three innings before giving way to Tierra Williams.

TSU is back in action for its final SWAC series of the season on Friday against Alcorn State at Memorial Park for a 3 p.m. start.