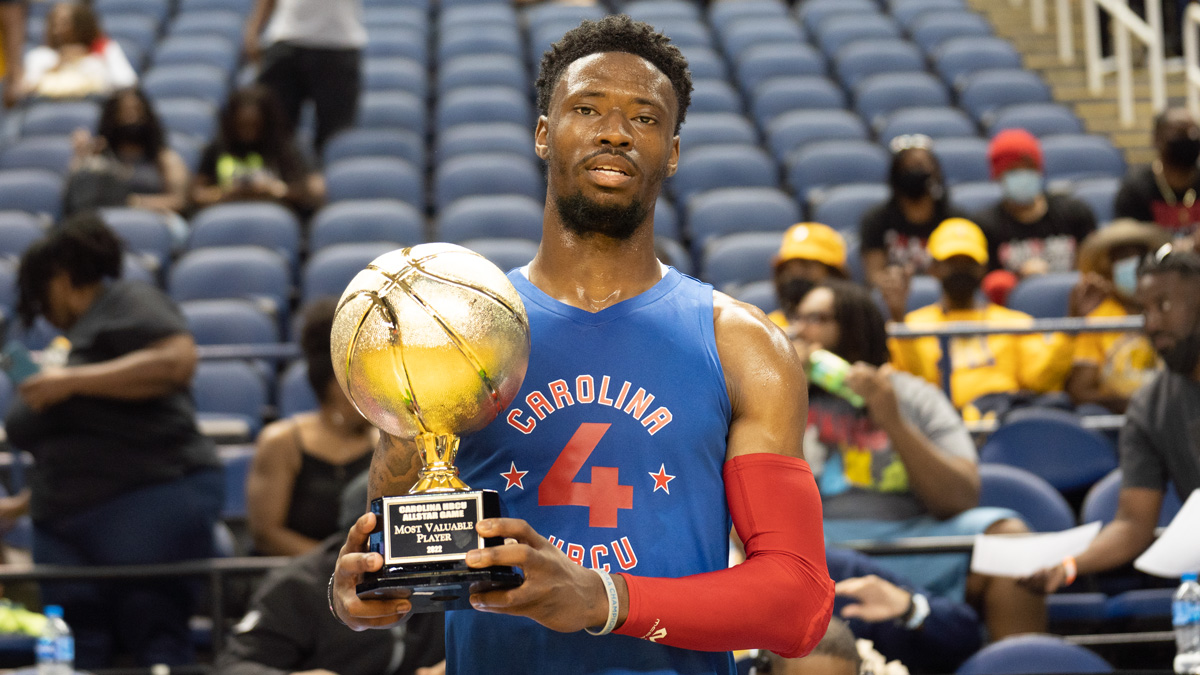 The inaugural Carolina HBCU All-Star game in Greensboro was a solid showcase for HBCU basketball stars as they look to transition to pros.

College basketball is king in North Carolina, and that includes HBCU basketball.

The inaugural Carolina HBCU All-Star Game, sponsored by Champion, took place in the Greensboro Coliseum on Saturday afternoon in an exciting exhibition that capped a day that included a tailgate and a women’s 3-point shootout.  Sixteen HBCU basketball stars from North and South Carolina got a chance to have one more shining moment as they transition from HBCU basketball to — hopefully — professional basketball careers.

The game brought together players that had competed against each other for years, some of them going back to their high school days with each other. North Carolina A&T guard Kameron Langley of Team Culture, a Greensboro native, got a chance to play on a court he’s very familiar with.

Langley played the distributor role as usual. Some of his teammates who hadn’t played with a point guard with his passing skills struggled to keep up at times, but he took it all in stride. Looking forward, he says he’s in the process of hiring an agent and starting his pro career.

“Just trying to stay ready, stay in the gym and keep working,” he said.

Fellow Greensboro native Jalen Seegars of Team Legacy got a rare chance to play in front of his hometown on Saturday. The former High Point Christian star began his college career at UNC-Ashville before transferring to Fayetteville State.

“It was a good experience, seeing all the family and hometown friends come out to see us all play today,” Seegars said. “So it was just a great experience out there playing in front of family.”

Seegars said he’s already signed with an agent and is ready to pursue a pro career either overseas or in the G-League.

A dozen HBCUs across North and South Carolina were represented, but none more than Winston-Salem State. Not only did WSSU have the most players (three), its cheerleading squad kept the crowd entertained during intermissions and alumnus BDaht served as the MC for the afternoon.

The Rams were well-represented in the game with Javonte Cooke and MVP Cameron Campbell both leading the way for Team Culture. Campbell was named the game’s Most Valuable Player.

“It was just a blessing, being out here with the best players in North and South Carolina. It’s the best way for me to end my college career,” Campbell told the media after the game. “I would have liked to have a championship — but God’s got something better for me.”

Like most of the other players, the 6’4 Fayetteville, NC native is looking at agents and trying to decide his next move. He and several of the other players on the court Saturday will likely find agents and play professional ball somewhere. For others, Saturday’s game was possibly their last chance to shine in a venue as large as the Greensboro Coliseum. To a man, they all seemed to relish the opportunity to be recognized as all-stars.

“This is honestly a dream come true. In a million years, I couldn’t have dreamed of nothing like this, so just being able to be out here, win MVP, have my family out here, my coaches, being able to share the court with my teammates and all these other great players is honestly a blessing and an honor,” he said.