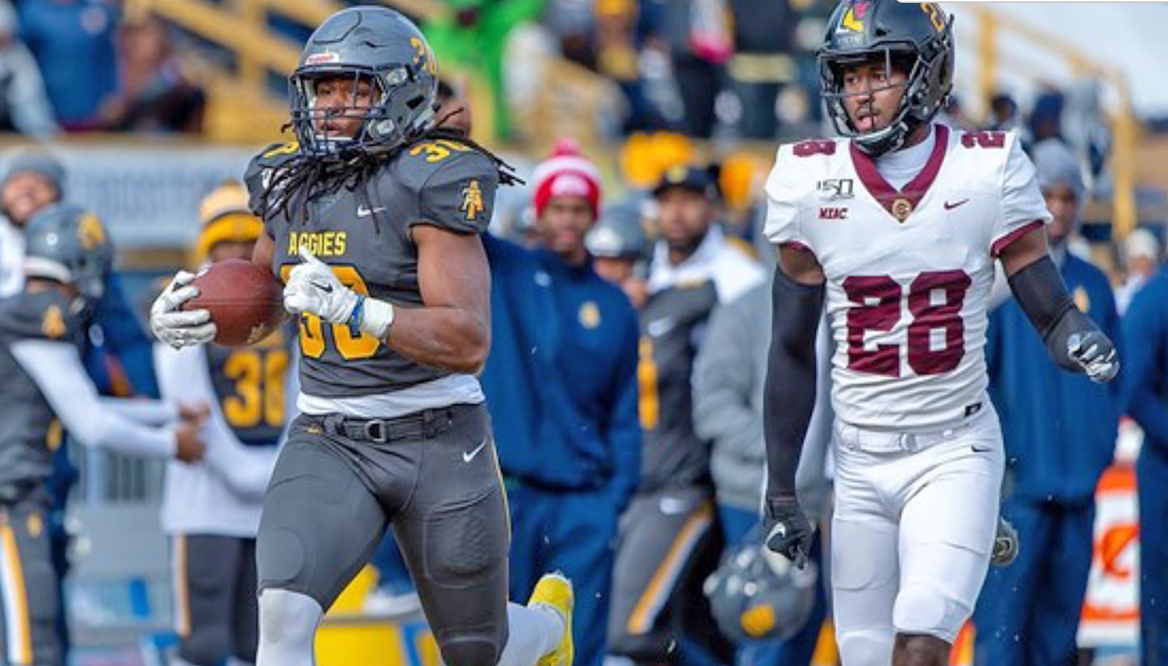 Jah-Maine Martin was the best HBCU running back in 2019 before the pandemic and an injury got in the way. Fully healed now, he hopes a return to form will land him on an NFL roster during or after next week’s draft.

Jah-Maine Martin was well on his way to being the top HBCU player in the NFL Draft before the COVID-19 pandemic hit.

Jah-Maine Martin before the pandemic

Coming off a productive sophomore season in 2018, he put up monster numbers his junior season at North Carolina A&T in 2019. The Conway, S.C. star led the MEAC and all HBCU runners with 1,446 rushing yards. He averaged a whopping 7.7 yards per carry (best in the FCS). Those numbers earned him multiple FCS all-American honors.

Most impressive that season, were his school-record 23 touchdowns, 22 of them of the rushing variety. Perhaps more impressive, ten of those scoring runs covered more than 55 yards. The most familiar sight that season was Martin running alone through the defensive secondary on the back end of one of those long TD gallops.

He ran with a combination of speed and power as the Aggies rolled to their third straight Celebration Bowl victory and third straight end of the season No. 1 ranking in HBCU football. Quick feet, sudden change of direction and shiftiness were his calling cards. The 5-10, 215-pound running back, like one of his predecessors at A&T – Chicago Bears’ running back Tarik Cohen – appeared primed for a legit shot at the next level.

Jah-Maine Martin after the pandemic

The Aggies made the excruciating decision to sit out both the fall 2020 and abbreviated spring 2021 season because of the pandemic. Rather than declare for the draft after his monster year or after a year away from the field in 2020 and spring 2021, Martin decided to come back in the fall of 2021 with an opportunity to burnish his already impressive resume.

Another year like 2019 would likely have vaulted him into the top tier of running backs for the 2022 draft.

The year away from the field and subsequent entrance of North Carolina A&T into a new conference, the Big South, coupled with a nagging MCL injury, caused Martin’s numbers to fall this past season. He managed just 134 carries for 522 yards in ten games for the Aggies. He averaged just 3.9 yards per carry and scored just four TDs. None were of the breakaway variety.

Obviously, Martin was just a shell of his former self.

Martin has worked hard to convince pro scouts that he’s more of the solid, breakaway threat he was in 2019 than the guy who struggled through the 2021 season.

Martin attended the HBCU Combine but did not go through any of the tests as his trainers felt it was too early in his rehab. He ran a 4.54 40-yard time at the HBCU Legacy Bowl and has posted a best time of 4.48 at his March 30 Pro Day at A&T. He has been working out six days a week at the House of Athlete in Florida.

“The regimen is turning me into a better player than I’ve ever been before,” Martin said of his training.

Most draft sites have him rated outside the top 30 at his position. But don’t be surprised if a healthy Jah-Maine Martin hears his name called during the April 28-30 NFL Draft or not long after it.