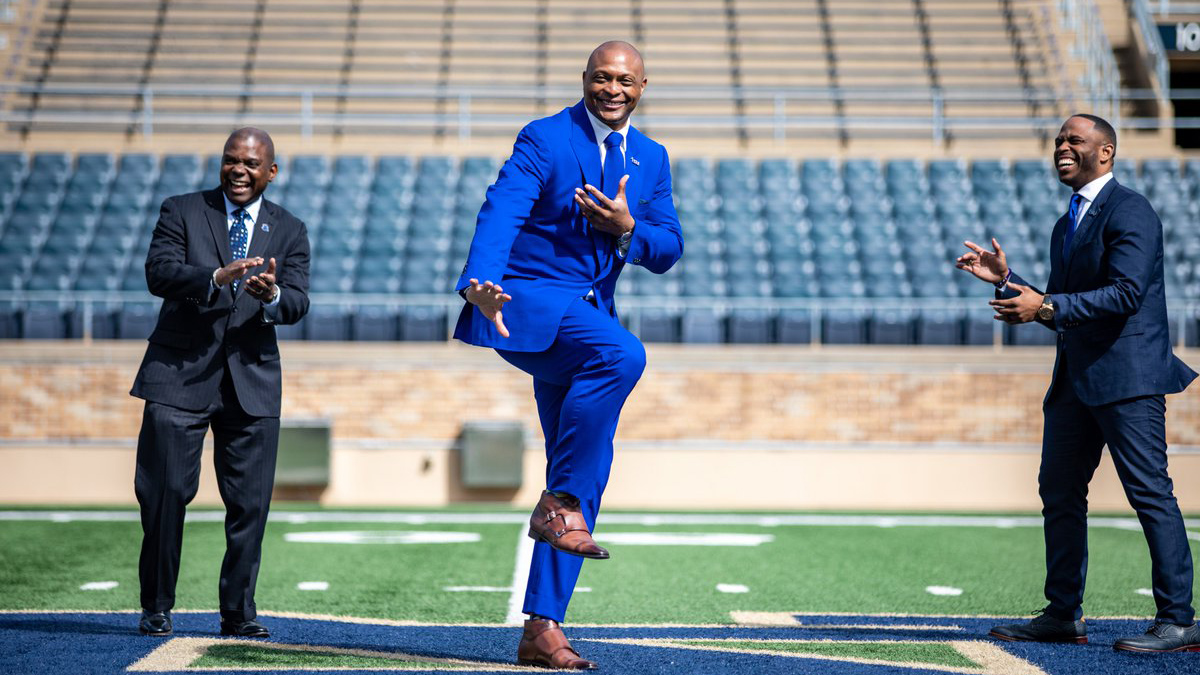 Playing Notre Dame will provide resources as Tennessee State continues to push toward its goal of moving to the FBS.

He didn’t know TSU would end up getting to become the first HBCU to play Notre Dame, but he knew he was on to something.

“I knew we had someone that was a high character individual, a football mind, but someone that was going to really change our program, change the trajectory of our program and get us back to a championship level because he pours into our young men,” Allen said at Wednesday’s press conference for the 2023 game. “And to be a part of that journey as the director of athletics is phenomenal to see every day. And so this game, again, is huge for our program.”

While no one said this wouldn’t have happened if Eddie George wasn’t the coach, it certainly didn’t hurt. George said the gravity of the moment struck him as he recently visited Notre Dame’s home field.

“I had a laugh to myself, like, my gosh, I’m actually going to be coaching on the sidelines in a stadium Knute Rockne built. Some of the great players that have played here, the great coaches like Lou Holtz and of course, my good friend Jerome Bettis. And it’s just overwhelming to think that I can help bring light to all the great things that we’re trying to do at Tennessee State University — that we’re going to do — and expose our kids to this. Playing in this building, in this venue, this is the cathedral of sports venues, relatively speaking, and to expose them to this is going to be a wonderful environment.”

Besides being a wonderful environment, it will also be an opportunity to earn a payday for TSU. No figures have been released on the payout that Notre Dame will issue to TSU as an FCS institution, but both parties agreed it was rather substantial.

“Dr. Allen negotiated for a bigger guarantee than we budgeted,” Notre Dame VP of Athletics Dr. Jack Swarbrick told the crowd in a half-joking manner.

“I look around here — y’all can make it happen,” George said with a laugh. “Y’all doing really well around here, I can see. It’s a drop in the bucket.”

All joking aside, Dr. Allen said that the game guarantee is just one part of the plan that TSU is executing.

“We continue to make investments not only in our football program but holistically in our student-athlete development programs,” Dr. Allen said. “Like, you reference our facilities.  To advance our programs, we know that we need support. And so this game guarantee is something that will be special. But we’re also getting private funding. And people in our Big Blue community are really buying into what we’re doing.”

TSU recently upgraded its weight-room and there are talks of putting down field turf at venerable Hale Stadium, TSU’s on-campus stadium.

“Our trajectory is through the roof. And it has a lot to do with our leadership. Our distinguished president. Dr. (Glenda) Glover. You know, we talked about this hire. We knew that things would come along with hiring Eddie George. But at the end of the day, you know, it’s not a gimmick. We want it to be real and we want it to be sustained excellence.”

Just where that sustained excellence will be housed is a good question. Earlier this year George indicated that Tennessee State was looking at options beyond staying in the Ohio Valley Conference. A few weeks later, Dr. Glover commissioned Dr. Allen to create a committee to evaluate conference alignment activities and future developments.

And those future developments might not be limited to the FBS. George was asked if there was potential for a home-and-home series. He provided a seemingly tongue-in-cheek response to the possibility of hosting Notre Dame, but he did give one nugget that could serve as a hint to TSU’s ambitions.

“I leave that up to our AD to figure all that out. We’re just going to relish in the moment that we have now and if there’s an opportunity to do a home-and-home, our goal is to get to the FBS level at some point in time, and maybe that could happen.”

A potential FBS move would be a massive undertaking. TSU became the first* HBCU ever to achieve that status back in the 1970s before moving from Division I-A to Division I-AA (now FCS). Still, George’s words have proven to be true before and they could do the same here.

*Correction: The article originally stated TSU was the only HBCU to achieve Division I-A status. Florida A&M had a short stint as a D-1A school before returning to D-1AA.