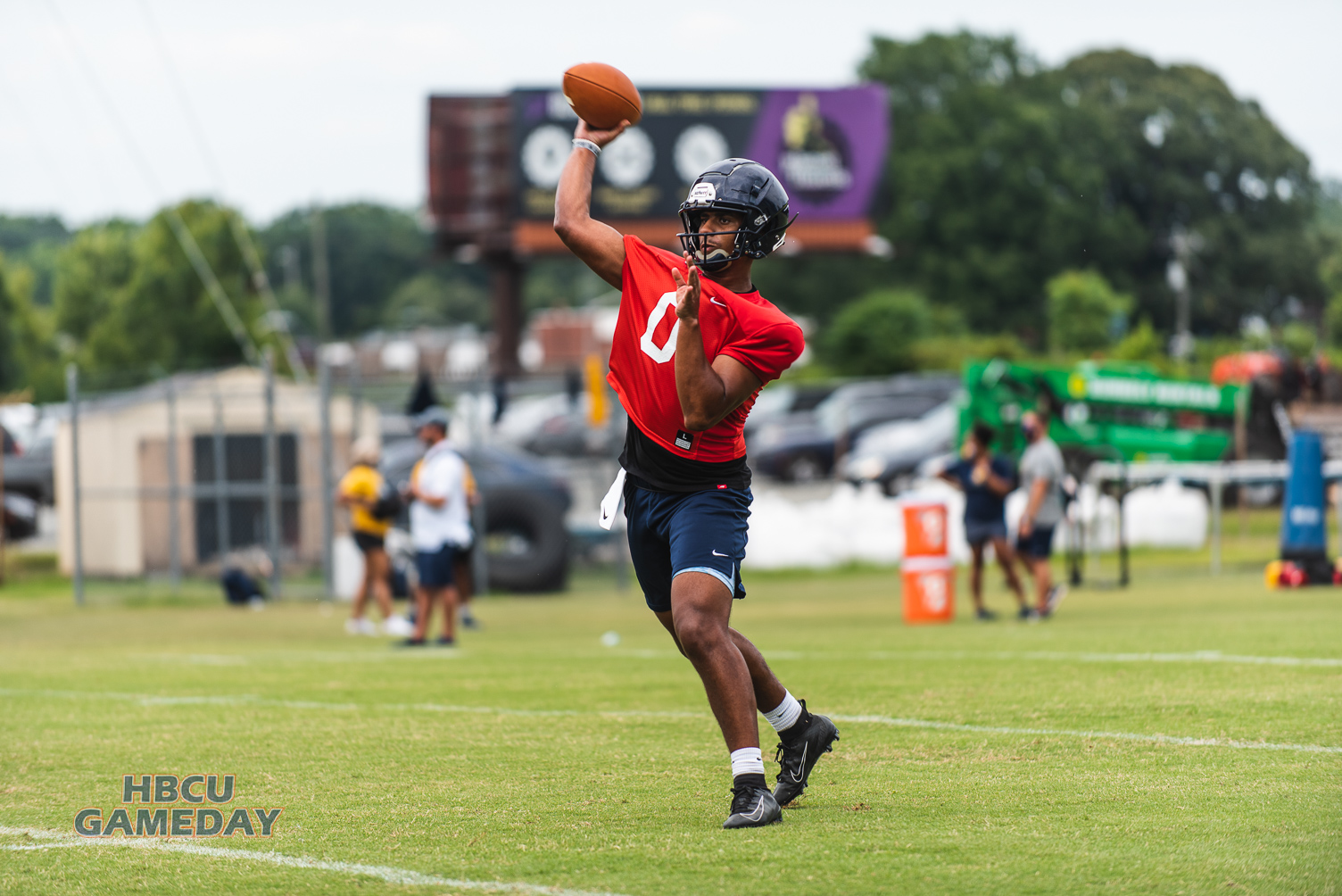 North Carolina A&T is undergoing a change in its football program in many areas, but its coach says he’s not going anywhere.

NC A&T head football coach Sam Washington made it clear the rumors of his demise are greatly exaggerated. Washington confirmed in a sit down interview with HBCU Gameday Thursday that he signed a four-year contract extension last year. That should put to rest any rumors of his pending dismissal.

In his two seasons after succeeding Rod Broadway, his teams went 10-2 in 2018 and 9-3 in 2019 with back-to-back MEAC championships, Celebration Bowl victories and national black college football crowns.

Job security was likely the least important thing on his mind as he and his coaching staff were putting the finishing touches on their preparation for the team’s spring game Saturday (11 a.m.).

That 5-6 performance came after the team sat out the COVID-marred 2020 season. The ravages of the virus also caused them to miss 2021 spring practice. So, the spring workouts have never been more important.

The cumulative effect of missing spring ball, Washington said, is the lack of a barometer.

“You have nothing to measure from,” he said. “You don’t know exactly where you are, so how do you know where you’re going. So that made it extremely difficult, being limited to what we could do in the spring last year.”

NC A&T: Plenty of work to do

Washington had a simple answer when asked about the areas on his team that had to be shored up most.

“Last season we were up and down,” said Washington. “We were on an elevator pretty much the whole season. No consistency. So that’s been a word (consistency) that we have used frequently. Let’s be consistent. Do things right. Be detailed oriented, fundamentally sound. I think we got a lot of that accomplished this spring.”

And there are a couple of particular things he’ll be looking for Saturday.

“Effort,” he said, “and paying attention to detail.”

That lack of attention resulted in untimely and costly penalties last season. The Aggies were the most penalized team in the Big South committing 91 infractions in 11 games resulting in 867 lost yards (78.8 yards per game).

“We could have won two more ball games had we been more disciplined than we were,” Washington said. “That’s another area of concern and one that we’ll be paying close attention to.

Quarterback was one of the most inconsistent positions a year ago. Incumbent starter Jalen Fowler stepped into a position expertly manned by seniors Kylil Carter and Lamar Raynard in the previous two campaigns. In his first season as a starter, the redshirt junior struggled.

Fowler completed 55.7% (127 of 228) of his passes for 1,774 yards with ten touchdowns and eight interceptions in ten games. He netted 108 rushing yards on 58 carries without a touchdown. He was sacked 16 times and lost three fumbles.

The Aggies will be without two of their coaching veterans this season.

Long-time running backs and assistant head coach Shawn Gibbs took over as head coach at Fort Valley State. Gibbs had been with the Aggies since 2011 serving for both Washington and Broadway and tutoring a stable of talented backs during his tenure.

“We’ve been together so long, it’s bittersweet,” Washington said. “You’re happy to see them gain opportunities elsewhere to further their careers. Those are very young men with families so they’re trying to better their situation. So, totally understood. I think they’re going to do a fantastic job. I with them well.”

NC A&T will play football in fall 2022 in the Big South before joining the rest of its athletic programs in 2023 in the Colonial Athletic Conference (CAA). Those other sports will begin play in the CAA this fall. That’s a deal presented by Athletics Director Earl Hilton that the school’s Board of Directors approved just over a month ago when they announced the decision to move to the CAA.

A&T decided to stick around in the Big South for football, primarily as a courtesy, after the conference lost four football-playing members in the span of four months. After adding Bryant University this week as an associate member for football, the Aggies will be playing in a newly revamped six-team Big South this fall down from the nine teams that competed a year ago.

“It’s been tough, honestly, not knowing,” Washington said of how he’s handled the school’s decision to leave the Big South but stay in it another year in football. “I’m a planner and not knowing can be stressful. But once you tell us where we’re going that will help us and enable us to get on the path to success. So, now we know the path we’re pursuing – we’re pursuing the Big South – that’s our mark.”

With Bryant now on board, the Big South announced its schedule earlier this week. The Aggies will open Big South play at home vs. Bryant on Oct. 8 and have home dates vs. Campbell (Oct. 29) and vs. Charleston Southern (Nov. 12). They play conference games on the road at Robert Morris (Oct. 22), and at Gardner-Webb (Nov. 19) to close out the regular season. The game vs. Campbell has been designated as homecoming, or as the Aggies call it GHOE (Greatest Homecoming on Earth).

834
The Latest in HBCU Sports and Culture