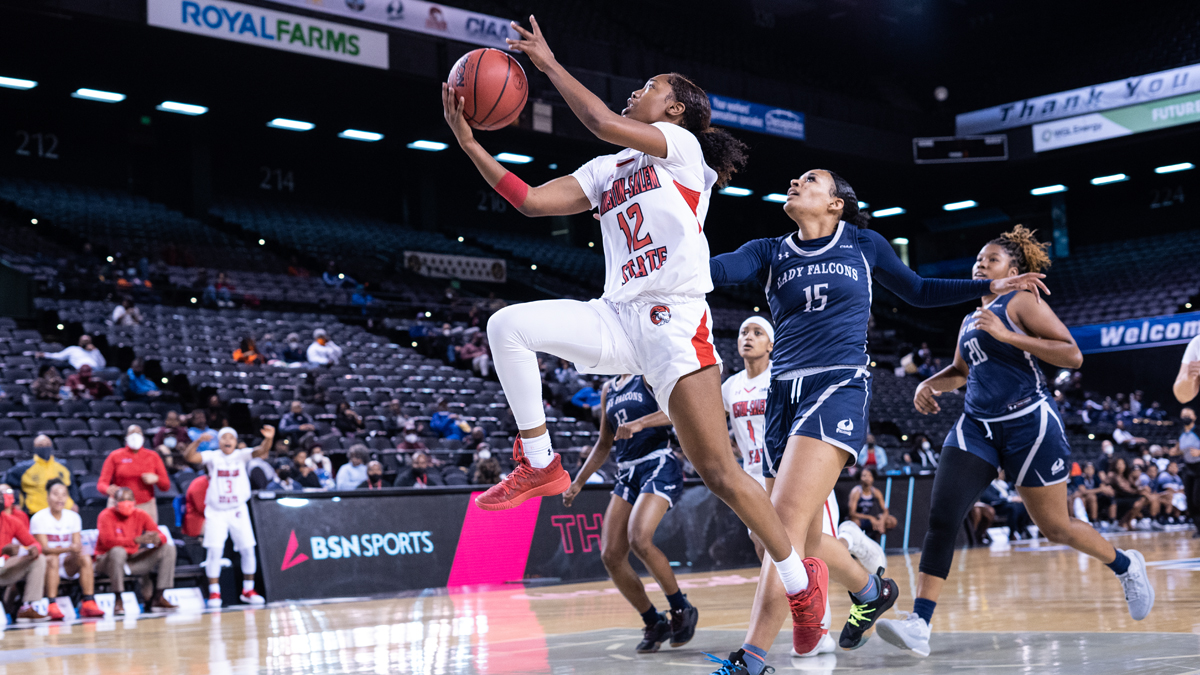 Winston-Salem State is enjoying the CIAA Tournament in Baltimore, but it will have to beat Lincoln if it wants to stay.

The CIAA Tournament made its debut in Baltimore on Tuesday and, so far, Winston-Salem State head coach L’Tona Lamonte is a fan.

She told the media after her team’s opening-round win against St. Augustine’s that it reminded her of what the tournament was like when she played in Winston-Salem.”

“One thing about Baltimore that I am liking is it reminds me of Winston a little bit when it was more fans in the game and people were there for the game and not just for the atmosphere outside of the game,” she said. “I think Baltimore has been great when it comes to hosting. Most of the people in the city have been pleasant when they’ve come up to us and were asking questions.”

“I don’t think they knew we were a basketball team. I think they thought this was a soccer tournament. But I’m excited about the treatment we’ve received here and excited about how far we can go with this partnership.”

Things started out well for WSSU (12-12) in the opener of the CIAA Tournament as it beat St. Aug 67-54. WSSU shot 49 percent from the field while holding SAU to just 38 percent shooting for the game, including a 3-for-18 performance from the field in the third quarter.

Freshman Kennedi Simmons had a team-high 12 points and fellow freshman Tyliah Burns added 11 points and three assists for the Rams. All-CIAA guard Amaya Tucker had 10 points and six assists as WSSU played well offensively, besides going 8-for-17 from the free-throw line.

“I’m very proud of the effort and attitude that they came out with,” Lamonte said of the win. “Free throws was a hindrance for us today. So that’s something we’re definitely going to have to work on in our sleep. We’re going to lay in the bed and just shoot that ball and pretend that we see it going in.”

WSSU has its work cut out for it as it will face Lincoln University, the top overall seed in the CIAA Tournament. The CIAA North champs pummeled WSSU in their only matchup of the season, an 82-55 score in Lincoln’s favor.

Lamonte said Lincoln’s playing style was a change-up from what the team played in the non-conference season which contributed to the lopsided loss.

“When we played Lincoln it was coming off of our non-conference season, and so the teams we played non-conference-wise were mainly 3-point shooters. And in going from that atmosphere into play physical teams that are very athletic, as a coach, I didn’t prepare my team for that moment,” she said. “And I think that was something that I had to learn. And we went ahead and get in the locker room with the coaches and we restructured some things defensively and also things that we know we have to work on…Are we a better team now than we were when playing Lincoln that day? Yes, we are.”

The Rams have slayed the Lions before in the CIAA Tournament, knocking off a tough squad in Charlotte in 2020. Kyree Hall thinks her team has what it takes to do it again.