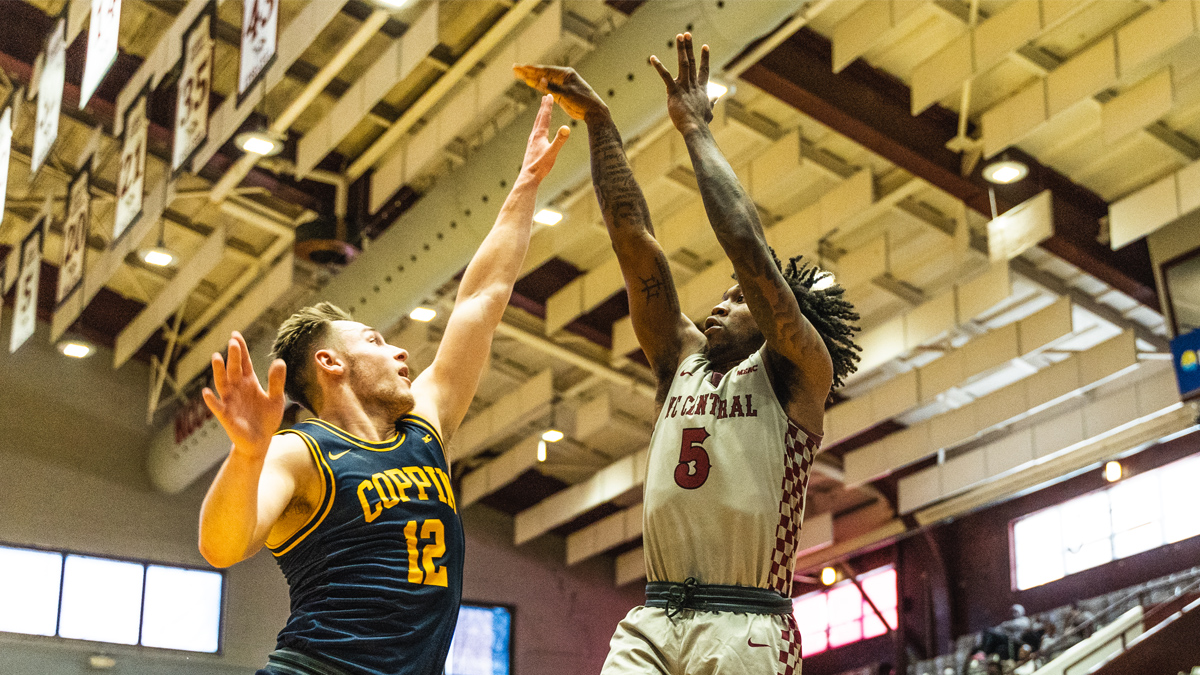 NC Central trailed by 12 points with less than five minutes remaining. But it got a big lift on a career night for Justin Wright and came away with a win.

DURHAM, N.C. – The NC Central University men’s basketball program rallied from a 10-point deficit for the fifth time this year; this time, from 12 down with help from a game-tying three-pointer by Justin Wright (Greenville, N.C.) with 3.1 seconds remaining to force overtime on the way to an 84-79 win over Delaware State on Saturday, Feb. 19, inside McDougald-McLendon Arena.

The Hornets improved their shooting in the second half, and shot 59.1 percent from the floor to push the lead out to 12 with 4:41 left in regulation.  The Eagles remained undeterred by the gap, and shot 50.0 percent from the field as well.  Most notably, the Eagles hit seven three-pointers in the second period, and made their final three attempts – all within the final 27 seconds of regulation.  Kris Monroe (Raleigh, N.C.) hit one of those, and Wright hit two of them, both in highly contested situations.

NCCU inbounded the ball with 8.0 seconds remaining in regulation, and Wright was able to race up the floor, and hit a deep trey while falling away with 3.1 seconds left to send the game to an added period.

The game was tied at two separate points in the overtime period, but DSU continued to hold the advantage until a corner triple from Marque Maultsby(Raleigh, N.C.) with 1:12 left gave the Eagles their first lead since late in the first half.  NCCU proceeded to close out the game by making all eight of its free throw attempts in overtime to secure the dramatic 84-72 victory.

Wright poured in a career-high 32 points, and scored 20 of those points in the final 25 minutes of the game.  He made 10 field goals, and also came one board shy of a double-double with nine rebounds.  Monroe crushed four treys, and dropped in 14 points with five boards, and Dontavius King (Greenville, S.C.) secured a joint team-high nine boards with nine points.  Eric Boone (Lexington, Ky.) dished out a game-high seven assists with nine points, seven rebounds, and four steals.

Myles Carter (Philadelphia, Pa.) supplied a big double-double with 22 points and 12 rebounds for DSU, and John Stansbury (New Castle, Del.) also had a big game with 26 points and six boards.  Both Stansbury and Dominik Fragala (Chantilla, Va.) hit three treys for the Hornets, and Fragala finished with 14 points.