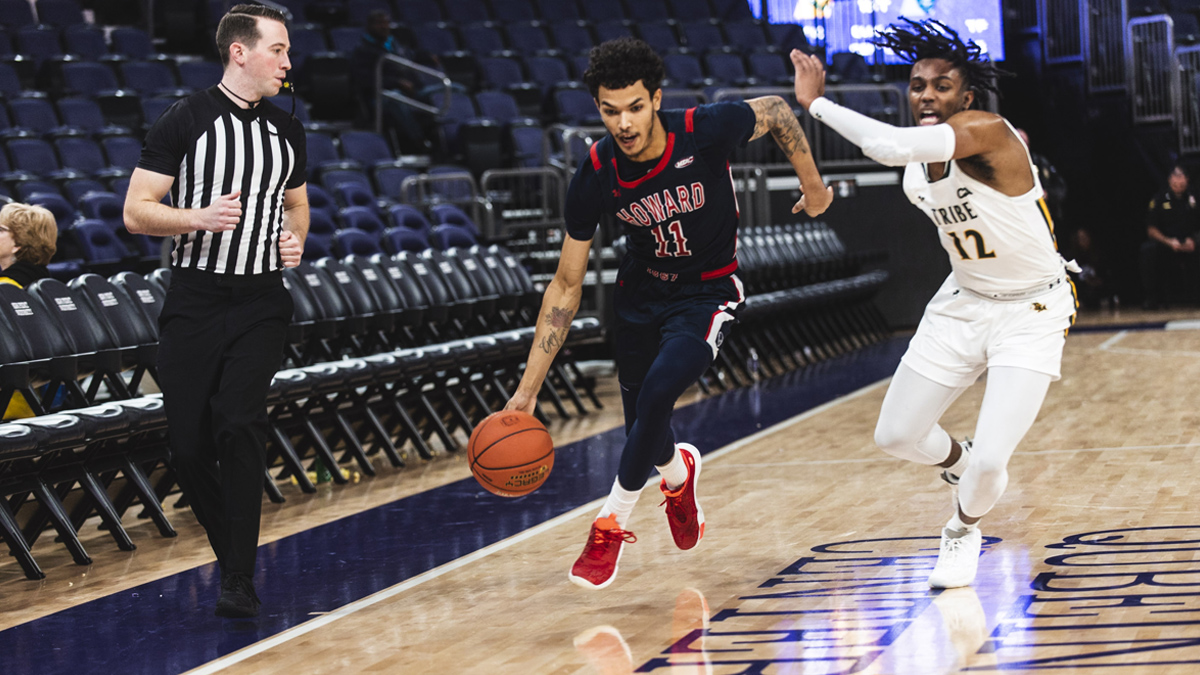 Howard University is on a five game winning streak, the longest in nearly seven years, after beating Maryland Eastern Shore.

With the victory, HU (13-10, 6-3 MEAC) extended its winning ways to five games, its longest streak in nearly seven seasons.

Four Bison reached double figures in scoring, led by graduate sharpshooter Kyle Foster (Hampton, Va.) with a game-high 22 points, including 15 in the first period, on 5-of-8 shooting from long range. With his efforts, the Virginia native inches closer to become the newest Bison in joining the 1,000-point club, only needing 15 points after tonight’s contest.

Howard opened the contest with a 7-0 spurt, but the Hawks responded quickly and took their first lead of the game after a layup from Mike Mensah, 13-12.

Both squads went back-and-forth throughout the first half with six lead changes, but the Bison took a slim two-point advantage at halftime, 37-35.

After intermission, graduate big man Randall Brumant (Houston) and redshirt sophomore forward Steve Settle, III (Glenarden, Md.) attacked the rim at will, going 5-of-6 at the charity stripe each. Both Bison finished the night with 16 points apiece.

Settle connected on a pair of freebies and pushed the margin to double digits with more than 13 minutes remaining, 49-39, but Maryland Eastern Shore cut the deficit to a one-possession game after made free throws by Donchevell Nugent, 49-46.

Despite trailing double digits through the second half, Maryland Eastern Shore clawed their way back and made one final run.

With less than 30 ticks remaining, Nugent drilled a three-pointer and cut the margin to three, 72-69, but Foster closed out the contest with clutch free throws, going a perfect 5-of-5 at the charity stripe to secure Howard’s fifth straight win.

For Maryland Eastern Shore (8-12, 3-6 MEAC), Kevon Voyles had a team-leading 14 points while Mensah and Nugent netted 11 points each in the loss.

On Feb. 19, Howard University battles Morgan State in the first-ever NBA HBCU Classic, presented by AT&T. Game-time is slated for 2 p.m. (ET) at the Wolstein Center in Cleveland, Ohio, as part of the NBA All-Star 2022.

The game will be simulcast on TNT and ESPN2.