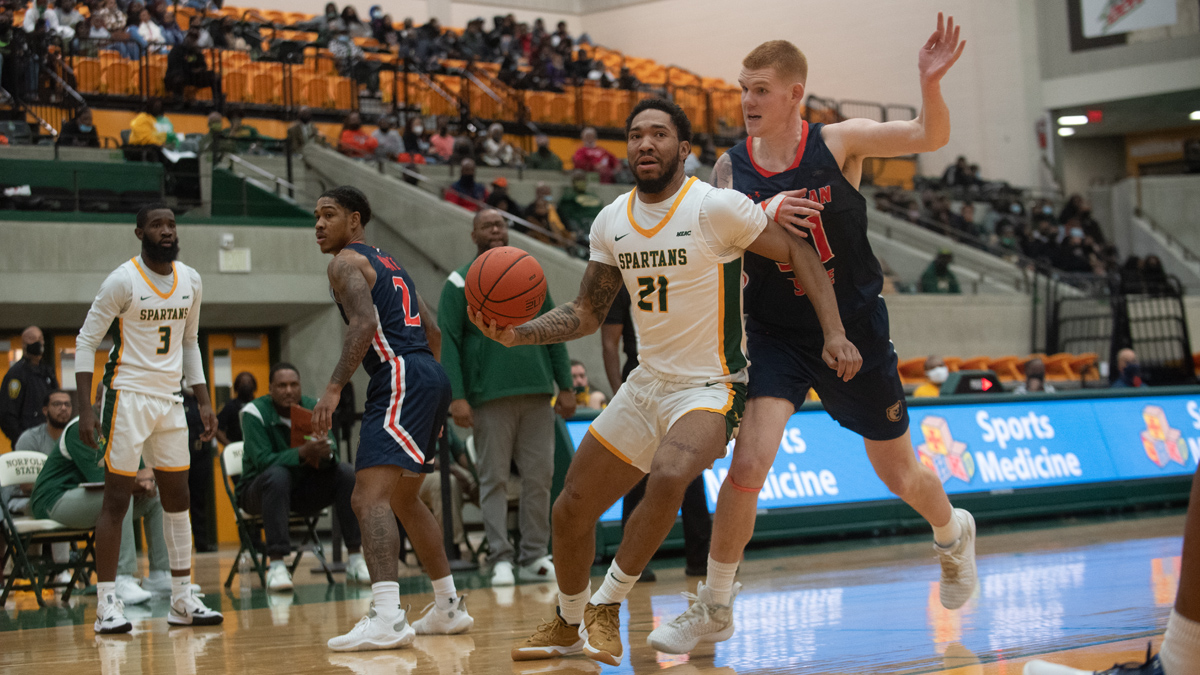 Norfolk State got a big game from Dana Tate Jr. as it held off a surprising challenge from Delaware State team.

DOVER, Del. — Redshirt junior Dana Tate Jr. had a game-high 20 points to lead the Norfolk State men’s basketball team to a 69-66 win over Delaware State on Monday evening in Dover. The win over marked the 100th career MEAC win for head coach Robert Jones. His first conference win was on Dec. 5, 2013, against former MEAC member Florida A&M, 91-87 in Norfolk.

In addition to Tate’s 20, both Jalen Hawkins with 14 and Joe Bryant Jr. with 11 reach the double-figure point mark.

After trailing 4-0 to start the game, NSU responded with a 9-0 run over the next three minutes to jump out to a five point lead, capped by a dunk by redshirt senior Kris Bankston. The Hornets kept up the defense and wouldn’t let the Spartans take more than a single-digit lead in the first half.

The NSU led by as many as eight in the first half at 26-18, but DSU scored the final five points of the half to pull within three heading into the break, 26-23.

Like the first half, the DSU scored the first points of the second half with a Zach Kent three just under a minute and a half into the period. Bankston would slam down another dunk to take the lead, but a 6-2 run put the host Hornets on top for the first time since that 4-0 start.

The Hornets took their last lead of the game with 4:12 left on a three by Martaz Robinson at 58-57. A three by Tate allowed NSU to reclaim the lead that they did not relinquish. The Spartans finished the game on a 12-8 run started by a five consecutive points by Tate and finished with a three by Bryant with one minute left.

The Hornets tried to buzz their way back into the game scoring the final six points but a three with 14 seconds left spun around the rim and would not go in the basket and the Spartans collected the rebounded, holding on for the 69-66 win.

Both Bryant and junior Christian Ings had seven rebounds, game-highs, apiece while both Bankston and junior Tyrese Jenkins each finished with five. Bryant had a game-high six assists.

NSU remains on the road next weekend with a trip to Baltimore, Md. to take on Coppin State on Saturday, February 19 at 4 p.m. and Morgan State on Monday, Feb. 21 at 7:30 p.m.