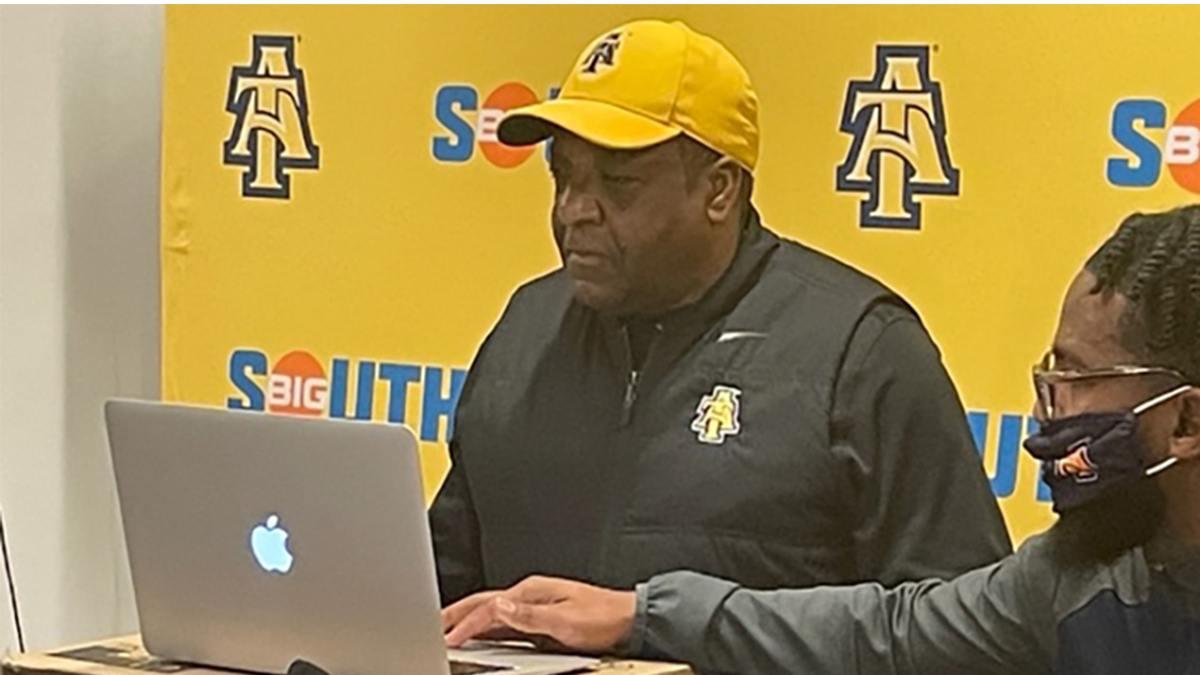 Defense has been NC A&T’s calling card and that’s what Aggies head coach Sam Washington and his staff shored up with their 2022 recruiting class.

The NC A&T football team released its 2022 Signing Day Class on Wednesday. The Aggies announced the signing of 14 players. Six of the players are defensive linemen, and three are defensive backs.

Head coach Sam Washington and all of his position coaches were on hand late Wednesday afternoon to unveil the selections to a group of boosters and donors online.

“We’ve got to get back to dominating that side of the ball,” said Washington about the Aggies defense. “That domination starts upfront. I don’t think there is any doubt that we also had a lot of issues in the secondary. We are bringing in two (Division I) transfers (defensive backs), who we believe can help us immediately.”

Washington promised with the transfer portal as active as ever, more players will be signed later.

Among the signees is local product, 6-2, 290-pound defensive tackle Jhyheem Pittman who was among the leaders on Dudley High School’s NC Class 3A state championship team. Pittman posted 28 sacks over the past two seasons and was the Greensboro News & Record’s Defensive player of the year.

Another potential standout is A’Monte Jones, a 5-10, 180-pound speedster who excelled as a wide receiver and kick returner at Oscar Smith HS in Chesapeake, Va. Jones was an all-state selection who had over 1,000 receiving yards and returned five kicks for touchdowns.

Caleb Jones (6-0, 300) is off the same Oscar Smith team that won back-to-back Virginia State 6A titles. Jones was named the state’s 6A defensive player of the year.

The two players that will provide immediate help in the secondary are Kansas transfer Karon Prunty (6-2, 190) who was a freshman all-American for the Jayhawks, and NC State transfer Mario Love Jr.

As to what the recent departures of Hampton, Monmouth, Kennesaw State and North Alabama from the Big South will do to the Aggies’ fall schedule, Washington said it will have an effect.

“Absolutely. Losing particularly the Monmouth and Hampton games, those two are our main concerns,” he said. “Hampton was penciled in as homecoming. So that is a major concern. But hopefully, they’ll come up with a solution. I”m going to wait and see.”

Chris Abraham
6-foot-2, 270, Defensive Tackle
Cox Mill/Concord, N.C.
Abraham signed with the Aggies during the early signing period in December. He is an excellent run stopper and should fit well with the Aggies run stop scheme who led Cox Mill to a first-round playoff appearance.

Chris Allen
6-foot-3, 270, Defensive Tackle
Wake Forest HS/Wake Forest, N.C.
Allen comes from one of the most talent-filled high school programs in the state. He is ranked as a 3-star recruit by 247Sports. He also considered Akron, Campbell and Old Dominion before attending N.C. A&T. He should develop into a solid defensive end for the Aggies. He is the 43-ranked player in North Carolina. For his career, he made 171 career tackles with 24 tackles for loss and 13 sacks. Wake Forest posted an 8-4 record in 2021 and made an appearance in the second round of the Class 4A playoffs.

Eli Brickhandler
6-foot-1, 190, Quarterback
AHOP Christian Leadership Academy/Chapel Hill, N.C.
Brickhandley is one of the most highly-rated high school quarterback signees in program history. He is rated as a 3-star quarterback by 247Sports after throwing for 2,794 yards during his prep career with 26 touchdown passes and only 12 interceptions. He also rushed for 847 yards and 11 touchdowns.

Tyshon Bullock
6-foot-2, 240, Defensive End
Cox Mill/Concord, N.C.
Bullock signed in December along with Chris Abraham from Cox Mill. He made a formidable defensive line with Abraham. He should be an excellent edge rusher for N.C. A&T. He also considered Akron, Campbell, Dartmouth and Coastal Carolina before signing with the Aggies.

Jonathan Campbell
6-foot, 190, Defensive Back
Mainland/Daytona Beach, Fla.
Campbell comes from an area that is known for its tremendous athletic talent. He played safety in high school and will look to be a versatile defensive back at N.C. A&T who made 153 tackles in two seasons, with 78 of those tackles unassisted, and also intercepted three passes. On offense, he rushed for 225 yards and four touchdowns on 37 carries. He also played quarterback in high school, throwing for 1,176 yards and 15 touchdowns.

Mack David
5-foot-9, 235, Fullback
West Forsyth/Clemmons, N.C.
He will play in the Aggies offensive system as a fullback. The position is a vital part of the Aggies offense. David played some middle linebacker in high school

Xzavier Fields
6-foot, 300, Defensive Tackle
Corinth-Holders/Wendell, N.C.
The Aggies added another defensive lineman to the 2022 class. Fields made 128 tackles and sacked the quarterback 10 times during his career.

A’monte Jones
5-foot-10, 180, Wide Receiver
Oscar Smith/Chesapeake, Va.
Will add quickness and big-play ability to the Aggies offense. He could also be effective in the return game. He led Oscar Smith to a 13-1 mark as a senior and back-to-back Class 6A state championships. Jones earned all-state honors by making 45 receptions for 1,061 yards and 14 touchdowns. He also had five touchdowns on returns.

Caleb Jones
6-foot-, 300, Defensive Tackle
Oscar Smith/Chesapeake, Va.
The Aggies added a lot of depth on the defensive line, as Jones will bring plenty of talent. Among the teams he considered were Morgan State, Army and Georgetown. He led Oscar Smith to back-to-back Class 6A state championships. He was also named all-state and Class 6A defensive player of the year. Jones is a three-time All-Tidewater selection who recorded 88 tackles, 47 tackles for loss and 15 sacks.

Mario Love, Jr.
5-foot-10, 170, Defensive Back
Hough/Cornelius, N.C.
North Carolina State originally signed him out of high school. As a junior at Hough, Love recorded 23 tackles (17 solos) and an interception in 10 games. He also returned a fumble for a touchdown. Love skipped his senior year to enroll at NCSU but later entered the transfer portal. Love was a 3-star athlete and was the No. 45 prospect out of high school. 247Sports ranked him the 73rd best cornerback in the nation.

Jhyheem Pittman
6-foot-2, 290, Defensive Tackle
Dudley/Greensboro, N.C.
The Aggies have done well with Dudley recruits in the past, and Pittman should be no different. Over two seasons he recorded 189 tackles (106 solos) and posted 28 sacks. He led Dudley to the Class 3A state championship crown and was also named the Class 3A defensive player of the year by the News & Record.

Karon Prunty
6-foot-2, 190, Defensive Back
I.C. Norcom/Portsmouth, Va.
Prunty committed to Kansas despite getting a late offer from Virginia Tech. He had a superb freshman season with the Jayhawks. Before announcing his intent to transfer, he earned freshman All-American honors. With 26 tackles he also had a team-best 10 pass breakups with one interception and a forced fumble. He will bring tremendous speed to the Aggies lineup after being a 50-meter state champion in Virginia.

Anthony Rucker
6-foot-3, 240, Tight End
Jones/Orlando, Fla.
Rucker comes to N.C. A&T as a 3-star recruit. He is the 114th-ranked tight end in the country and the 238th-ranked player in Florida. Rucker also considered Charlotte and Appalachian State. He caught 27 passes for 455 yards and five touchdowns in two seasons. On the defensive end, he made 37 tackles.