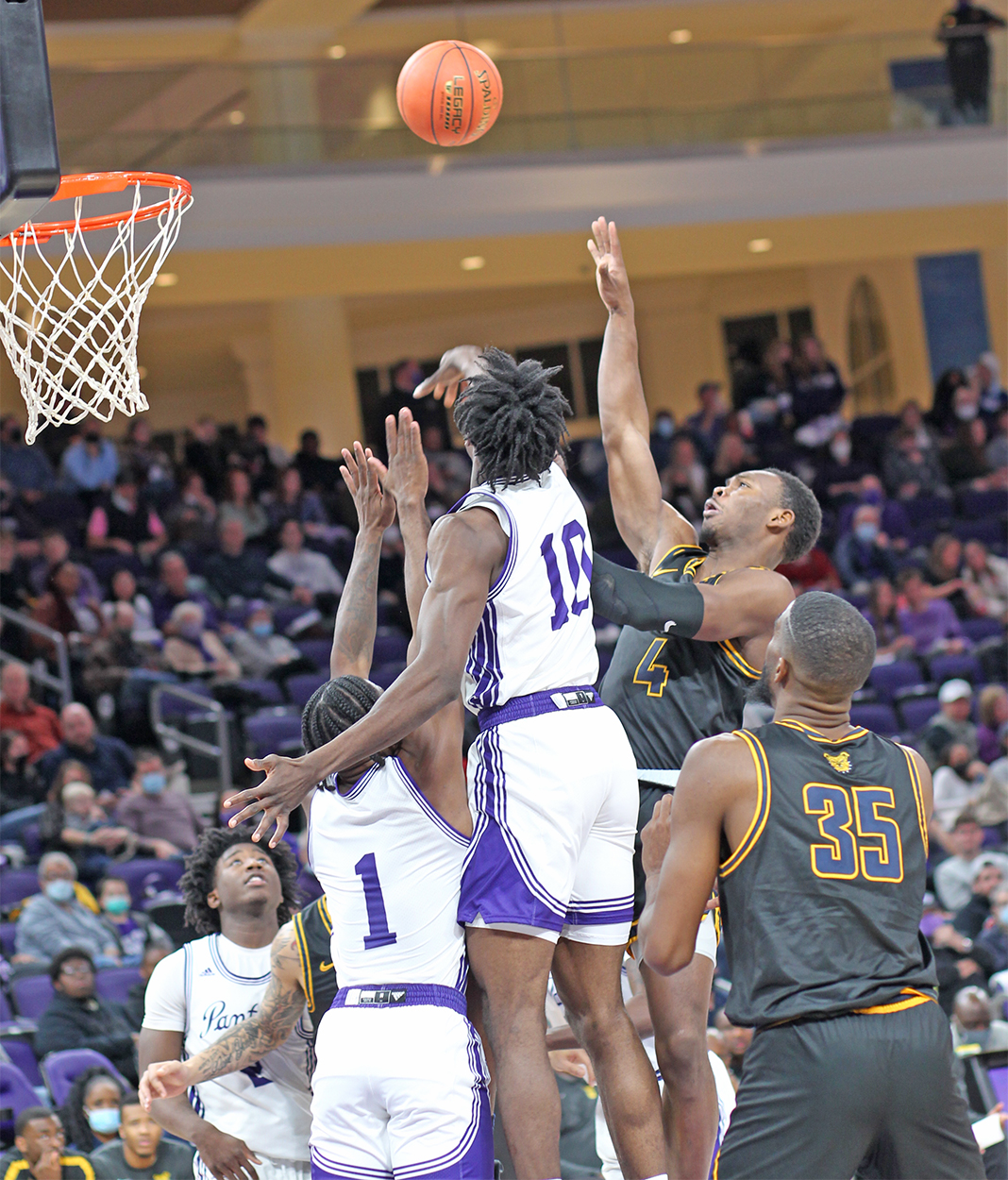 Marcus Watson’s 17 points led NC A&T who fought back from a double-digit second-half deficit to throw a scare into High Point. The teams honored Gene Littles before the game, who played at High Point and coached at NC A&T.

HIGH POINT, N.C. – On a night where a former outstanding High Point University player and NC A&T head coach – the late Gene Littles – was honored, the teams battled for the first time as members of the same conference.

In a spirited contest, NC A&T fought back from a late double-digit second-half deficit to pull to within two twice in the final minutes before High Point escaped with a 78-71 home win at its new Qubein Center.

The Aggies (8-10, 3-1) trailed by as much as 16 at 70-54 with just 3.42 left before they staged the frantic rally. It came after the A&T bench was called for a technical foul after arguing what they thought was a missed foul call underneath on a putback attempt by Tyler Maye. The 14-0 run that ensued came after High Point’s John-Michael Wright hit one of the two technical free throws.

Demetric Horton’s 3-pointer with 3:07 left got the Aggies to within ten, at 70-60. Wright was called for an offensive foul and the Aggies scored again on Marcus Watson’s layup to pull within 70-62 with 2:29 to play.

After a High Point miss, A&T’s David Beatty drained a 3-pointer to pull the Aggies to within 70-65 at the 1:53 mark. High Point turned it over again on its ensuing possession and Horton connected on another 3 to cut the lead to 70-68 with just over a minute, 1:05 to play.

High Point’s Zach Austin’s dunk was answered with a layup by Maye. Down 72-70 with under a minute left, the Aggies were forced to foul. Wright’s two free throws made it 74-70.

Wright and Watson then both split two free throws leaving HPU up 75-71. The Aggies missed two 3-pointers before Jaden House got loose for a breakaway dunk and foul with just :04 seconds left. His ensuing free throw put the Panthers up 78-71 for the final margin.

“We didn’t start playing consistent basketball until late, you can’t do that on the road,” said A&T head coach Will Jones. “Miracles would have helped us win the game but miracles don’t happen all the time.”

Wright finished with a game-high 28 points while House’s 16 and 15 from Austin joined him in double-digits. Watson led A&T with 17 points. Beatty added 14 and Horton had 13.

Littles spent six years playing professional basketball before embarking on a coaching career that included a stint in the NBA with two teams. He became the head coach at NC A&T from 1977-79 leading the Aggies to an MEAC championship. Littles passed in September of 2021.

“It was really an honor to be able to play against A&T and to honor Gene Littles, who is the greatest player to ever play at High Point University,” said Smith after the game. “To see all the achievements he had and some of the accolades, it is why it was such a spirited game because Gene Littles had played here and coached there and won championships there.

“So, it was a special night for High Point University and especially for myself, as I know what he meant to me and to this university,” said Smith who also played at High Point and competed against A&T and other HBCU teams during his time there. “You couldn’t find a better person, a better man. He made High Point his home. And that’s one of the reasons I came to High Point is because of Gene Littles. It was a good way to honor him tonight, to get the win.”