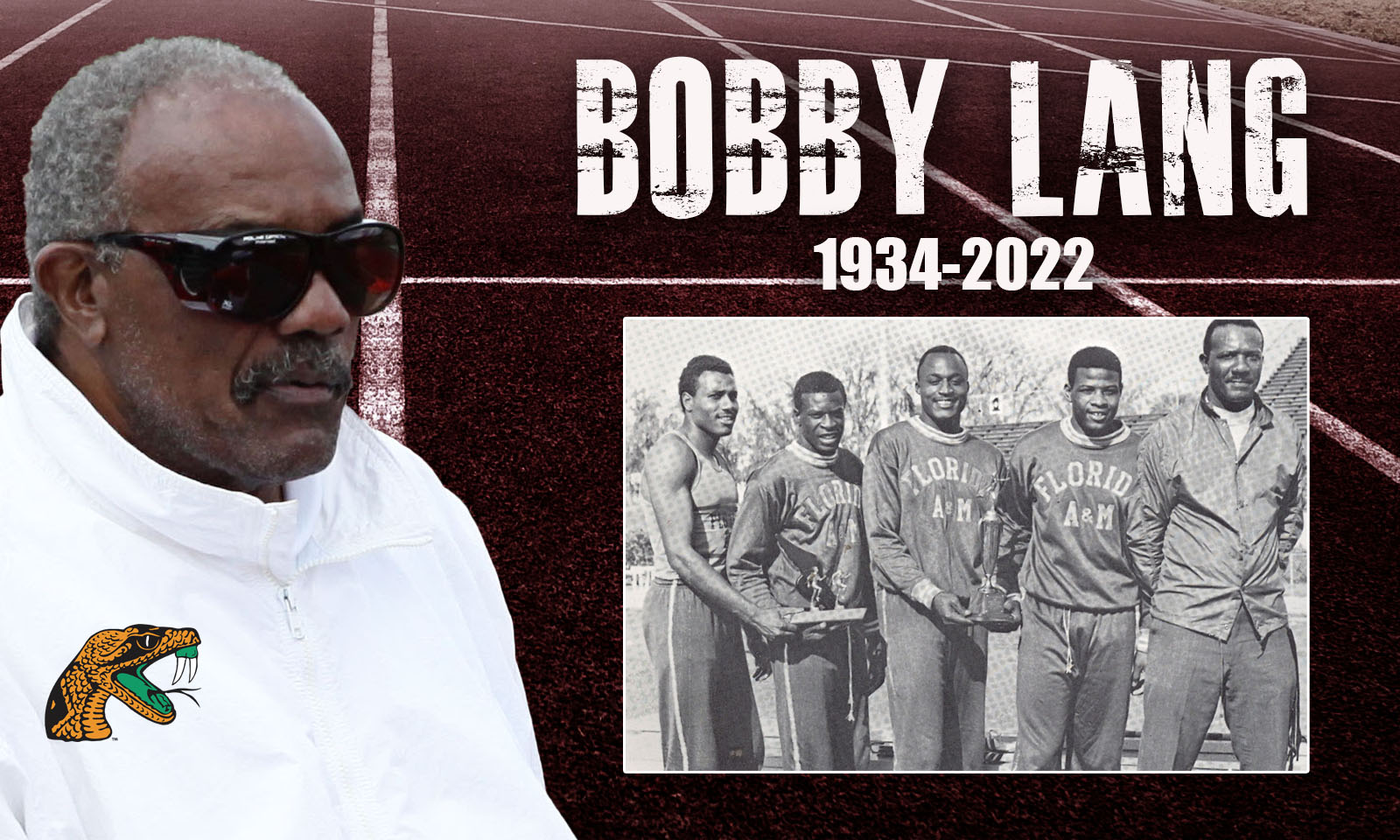 Lang won 38 championships as a track and field coach.

“If you look up coach in the dictionary you will see a lot of faces, but you damn sure will see coach Bobby Lang in there,” said FAMU Hall of Fame quarterback Albert Chester Sr.  Chester played quarterback for FAMU from 1975-1978, leading the Rattlers to a black national championship by going undefeated in 1977 and winning the first-ever NCAA D I-AA Championship in his senior season.

Today, we honor the legacy of one of the greatest and most accomplished coaches in FAMU history, Bobby Lang, who passed on Jan.6 at his home in Tallahassee.  Lang played offensive tackle for legendary coach Jake Gaither from 1953-1956 after being recruited out of Jacksonville, Fla.  He would earn his bachelor’s and master’s degrees at FAMU in Physical Education and Recreation.  He began coaching at FAMU High School after playing for the Rattlers and was brought in on Gaither’s football staff at FAMU in 1966.  Upon taking the offensive line coach position Lang also became the head track and field coach.

Henry Lawrence and Pam Oliver were among his athletes

Among his football players at offensive line was Henry “Killer” Lawrence who went on to get drafted and play for John Madden with the Oakland Raiders, winning a Super Bowl in 1977.

Among his track stars was Pam Oliver who was an All-American 400m runner and was a member of FAMU’s All-American 4x400m relay team with teammates Pamela Porter, Vogel Newsome and Mary Jones. The foursome excelled at both the Penn Relays and the NCAA Track & Field Championships.  Oliver is an NFL broadcasting professional with over two decades experience as a sideline reporter.

Oliver, a FAMU Sports Hall of Famer herself, was obviously distraught and spoke highly of her former coach.  “He lived for FAMU!  He taught all of us to have pride in our school.  People use the phrase often, but he truly bled orange and green.  He was so much more than just a coach to all of us,” she said.

Lydia Hall-Ashley, one of Oliver’s teammates expressed her feelings on Lang, exemplifying his profound affect on athletes. “This man not only taught me and so many others how to run, he taught us about life. He taught us how to compete, never give up, and to treat people right. He will be missed.”

He was also responsible for recruiting Reggie Davis, a record setting 110 meter high hurdler.  Davis set records that remain to this day and was an Olympic prospect.

Lang won championships in the SIAC and MEAC

He coached during a time where at HBCUs, coaches often were teachers as well.  Because there were not budgets for athletics to support coaching staffs, often the coaches had to have other employment to supplement the stipends given to them to coach.  Lang was a longtime instructor in the department of Health, Physical Education and Recreation (HPER) at FAMU.

He and best friend Robert Mungen also directed the National Youth Sports Program (NYSP) at FAMU for decades. The NYSP annually hosted over 500 kids from the south side of Tallahassee for Summer camp on the FAMU campus.  Some of the kids they introduced to sports in the NYSP would grow up to make rosters on his track and football squads.  More importantly, Lang and Mungen both served as mentors to countless youth over their tenures directing the NYSP.

Chester is very passionate about the legacy of Lang.  “One of a kind!  A special kind of guy that had his own unique way of inspiring players.  Coach Hubbard was not the kind of coach who would be aggressive in getting his point across verbally, but Lang would say whatever needed to be said and however it needed to be said.  Even if it included a few four letter words, “ Chester heartily said.

Lang’s sprinter were the fastest in the nation

“When he came from FAMU High he learned the college coaching profession with our team.  He made us run cross country to get conditioning even though we were sprinters.  He kept our relay team together and that unity helped us to perform at the highest level.  He was just like a father to us.  When we practiced late and missed dining hall, his wife Gladys would have us over and would feed us.  They were more like a mom and dad to us,” said Milton.