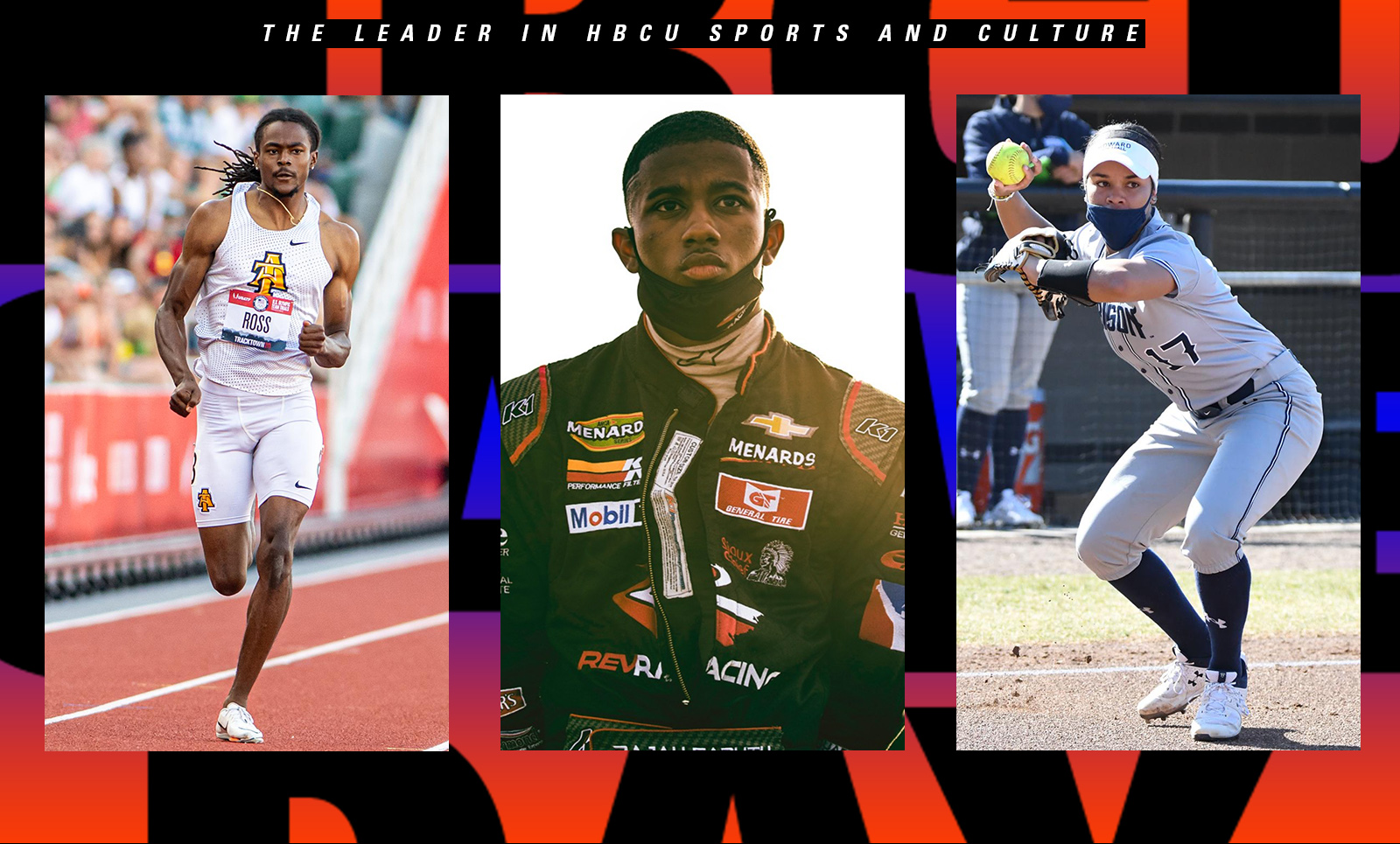 Eight HBCU student-athletes to watch in 2022

The year 2021 was great for these HBCU student-athletes. But 2022 could be even better for some of them.

Without question, the year 2021 has been one to remember for HBCU sports.

A lot of attention has been paid to the coaches — and rightfully so — but the student-athletes have a huge role to play too.

Rajah Caruth — NASCAR, Winston-Salem State University
Ok, so Caruth doesn’t compete against other HBCU athletes. But the sophomore from D.C. is getting his degree in motorsport management at Winston-Salem State while progressing as a driver with Rev Racing. He picked up a pair of wins at Hickory Motor Speedway in 2021 in the Advance Auto Parts Weekly Series earlier this year driving a late-model car. Caruth made his debut in the ARCA Menards Series, finishing third in points with a pair of top fives and five top 10s in eight races. The recipient of the 2021 Wendell Scott Trailblazer Award, named after NASCAR’s first African-American Driver. Again, he’s been doing this all while working towards his degree at WSSU.

As great as the year 2022 has been for Caruth, 2022 could be even bigger. Caruth is set to make his debut on the Xfinity Series as a part-time driver. He would be the eighth black driver to make it that far. And he’ll only be 20 in 2022.

Randolph Ross Jr. — Track and Field, North Carolina A&T
A little less than three years ago, Randolph Ross went viral for picking North Carolina A&T over Power Five programs at his high school signing day event. Many scoffed at him at the time, but nobody questions him anymore. That’s what happens when you become a national champion and an Olympic gold medalist in the span of a month. Ross dominated the outdoor season last spring, bringing home an individual title in the 400m and helping A&T overpower the competition in the 4×400 en route to a national title in that race as well.

Having achieved the apex of his sport following his sophomore season by winning a gold medal with the USA 4×400 team, Ross could have easily turned pro. But he decided to return to NC A&T and continue to learn under his father, head coach Randolph Ross Sr. Heading into the indoor and outdoor 2022 seasons, Ross will likely be the favorite in just about every race he signs up for.

Before he ever officially put on a Jackson State uniform, Shedeur Sanders had already shaken up the HBCU world. Last July at SWAC Media Day he told HBCU Gameday that if his offense dominated its defense it would equate to “a blowout” against SWAC opponents. Those words ignited a lot of heat on social media, but throughout the course of the season he proved that he could back it up. The freshman led JSU to a 10-1 regular season record, a SWAC East title and a SWAC championship while earning Freshman of the Year in the SWAC and the Jerry Rice Award.

Sanders finished the season with arguably his two most freshman-like performances in the SWAC Championship Game against Prairie View and the Celebration Bowl against South Carolina State. Still the future looks bright for the 2021 HBCU Gameday/Protect Your Skull FCS Offensive Player of the Year.

Travis Hunter — Football, Jackson State
Fans of black college sports — particularly football — have been waiting for a Travis Hunter for the better part of the last half century. They just didn’t know who he was or when he was coming or where he would go. Travis Hunter shocked the recruiting world by signing with Deion Sanders and Jackson State after being previously committed to Florida State on National Signing Day as the top rated recruit of the 2022 class.

Hunter will head to JSU to join a defense that was one of the best all season long, but could have used him in the Celebration Bowl. All eyes will be on the two-way playmaker as he competes in the SWAC and as others could look to follow his lead in choosing an HBCU.

Should JSU win the SWAC — which isn’t a given — Williams-Holiday will get a chance to play in the national spotlight.

Cameron Bufford — Baseball, Grambling State
Cameron Bufford had a productive sophomore season for GSU in 2021, finishing second on the team in hitting with a batting average of .314 in 44 games. Those totals included 58 hits and a team-high 12 home runs. In addition to his performance at GSU, Bufford played in the prestigious Cape Cod League over the summer — one that has produced 1,000 former players who have gone on to play in the major leagues.

Don’t be surprised if the big leagues come sniffing after the Grambling State junior this season as well as other HBCU stars.

Gregory Odom — Golf, Howard
Howard University golf didn’t exist before the pandemic, but it is quickly making its impact on HBCU golf and beyond thanks to talents like Gregory Odom. The Memphis, Tennessee native started his career at Memphis before transferring to HU as Steph Curry was helping the school re-establish golf. He came out the gate strong for the Bison, tied for 19th place overall on the player leaderboard with his consistent play carding 73 all three rounds for a total of 219 on the par 70-6,799-yard Golden Horseshoe Gold Course.

He followed that performance by defeating the Navy gold and blue team in Play by the Bay, then defeated George Washington in a DMV match play. Odom tied for fifth in the MEAC Championship Tournament.

Camille Navarro, a Los Angeles, Calif. native, finished the regular- season in the top five in several categories. She led the MEAC in batting average (.421), slugging percentage (.664), hits (45) and doubles (10). She was also second in on-base percentage (.452), tied for second in runs scored (22), second in total bases (71), third in stolen bases (14) and tied for fourth in home runs with four. Navarro finished ranked 17th in the NCAA as the toughest to strike out, 39th in doubles and 52nd in batting average. She recorded her 100th hit on March 10 against Towson. Navarro is the first Howard softball player to be selected as MEAC Player of the Year since Courtney Young won the award in 2008.

Eight HBCU student-athletes to watch in 2022