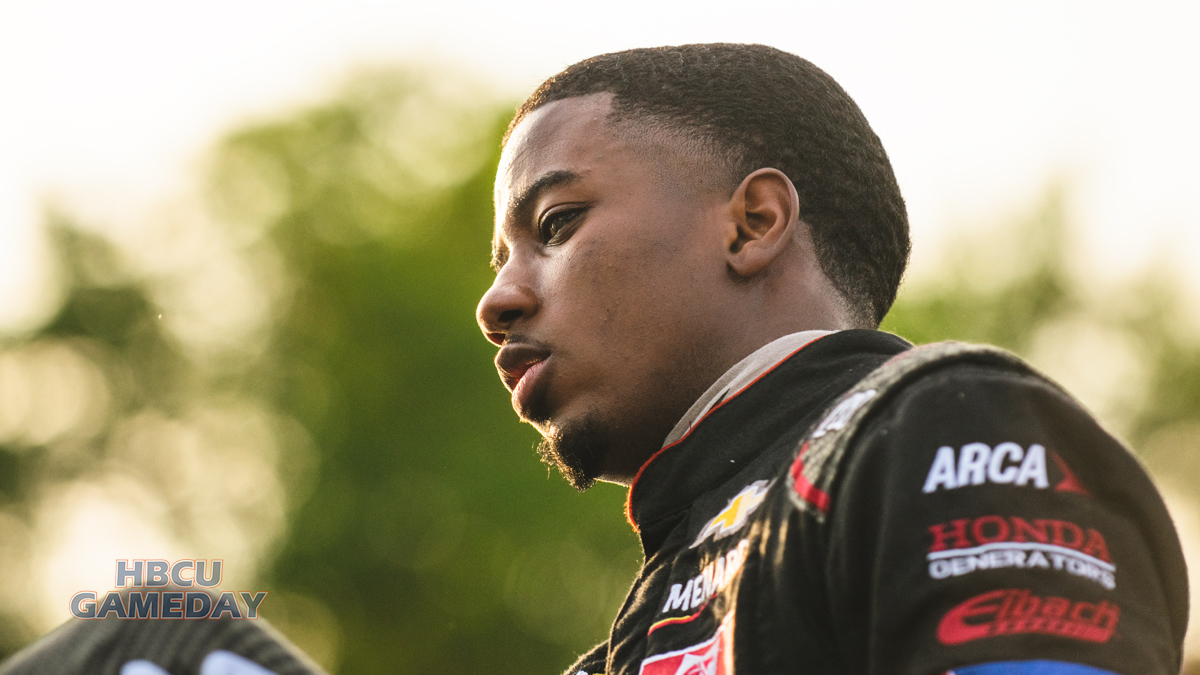 The Evolution of Rajah Caruth continues

Rajah Caruth has learned a lot on and off the race track in the past year. We caught up with the aspiring NASCAR driver and HBCU student at Hickory Motor Speedway.

HICKORY, NC — The Rajah Caruth I saw on Saturday night at Hickory Motor Speedway is not the same one I encountered nearly a year ago on the same track. And it’s not just the new facial hair growing from his chin.

Last July he was a new driver getting his feet wet in both racing and school as he prepared for his freshman year at Winston-Salem State University.

A year later, Caruth has tasted victory. And has fallen in love with it.

He picked up the first win of his NASCAR Advance Auto Parts Weekly Series racing career last October at historic Greenville-Pickens Speedway in South Carolina. In mid-April he picked up two wins in one night here in HMS, the place self-dubbed as “America’s Most Famous Short Track.”

So when he finished second in the final race of the night, he was visibly disappointed.

“Second sucks but it’s been a really big switch from what we were doing last year to being competitive and racing for wins now. It was kind of weird to think that now, but now it’s like, I’m disappointed with running second or third,” Caruth said at the end of the night. “I hope to keep it up and continue and we go on this year. Hopefully parlay this momentum into the ARCA East stuff and hopefully get our first win over there.”

Caruth finished just behind Ryan Millington in the second race of the night. Millington was the 2021 track champion at the track known as “The Birthplace of the NASCAR Stars.” Caruth says facing that level of competition is only helping him to improve.

“To cut my teeth here and go against track champions and Xfinity race winners and — really the best of the best — that’s how I’m going to get better.”

I hated to ask him about school after he just got finished driving at hyper-fast speeds in a circle, but since this is HBCU Gameday, I kind of had to. He was a part of a freshman class that entered college in the middle of a pandemic. Caruth admitted that managing his time was an issue for him early on. He was already in the middle of race season when school started last August, so he had to adjust.

“I’m not going to lie, it has been hard as I’m a little hard-headed too. I kind of have figured it now, but obviously just trying to improve on my time management,” Caruth said. “I can get all my racing stuff down, it’s just a matter of getting my school work done. I struggled with that first and still learning but improving every time I do work, I guess.”

A college freshman having trouble with time management. Imagine that.

This year Rajah Caruth isn’t just racing in NASCAR Advance Auto Parts Weekly Series: he’s also racing in the ARCA Menards Series — the premiere division of the Automobile Racing Club of America. The week before in Dover, he was leading that race with 51 laps to go before he blew a tire and ran into the wall.

Nevertheless, Caruth knows that improvement is in more than just wins and losses.

“I really see the improvement with myself from getting information from my race team and understanding it. Understanding what I’m doing on the race track, what changes do physically to the car and understanding how that feels to me. I think that’s where I can judge my improvement the most. Just understanding everything better and being able to apply things that I’m told and that I learned,” he said.

“When I do those things like I’m supposed to, the results come.”

The race is over. Rajah Caruth wanted this win badly, especially what happened in Dover. He wanted to win that race badly, partially because he had never won on that series, but also because he had a lot of family in from the Washington D.C. area.

There wasn’t a strong contingent of family in Hickory, a sleepy town in the foothills of North Carolina, his adopted home state. It was just Rajah and his father, Roger, who is omnipresent. He wanted to be back at the front of the winner’s circle. He got close — but it didn’t happen.

But there was little time for moping. Instead of family, Rajah was greeted by fans. Families brought their children down to the track to sit in the race cars and interact with the drivers. Caruth, barely a legal adult himself, put aside his disappointment to let a few children sit in his car and answer their questions.

And it wasn’t just children who wanted to interact with him. Several fans came down to meet him, hold a little conversation and get him to autographs. While they waited for someone to bring a pen, one told me that they followed him on social media, but were excited to get to meet him in person. Caruth has heard some boos when he won previously, so maybe that’s why he wasn’t quite prepared for the autograph requests.

One thing they all had in common: none of them looked like Rajah Caruth. That’s a testament to his ability to connect with people while maintaining his self-identity. That level of balance will be critical for him as he continues to forge forward in a sport that is doing what it can to invest in people that do look like him so that it can grow its fan-base. All signs point to him being a big part of that future.

But he better start bringing a sharpie. He’s probably going to need it.

The Evolution of Rajah Caruth continues