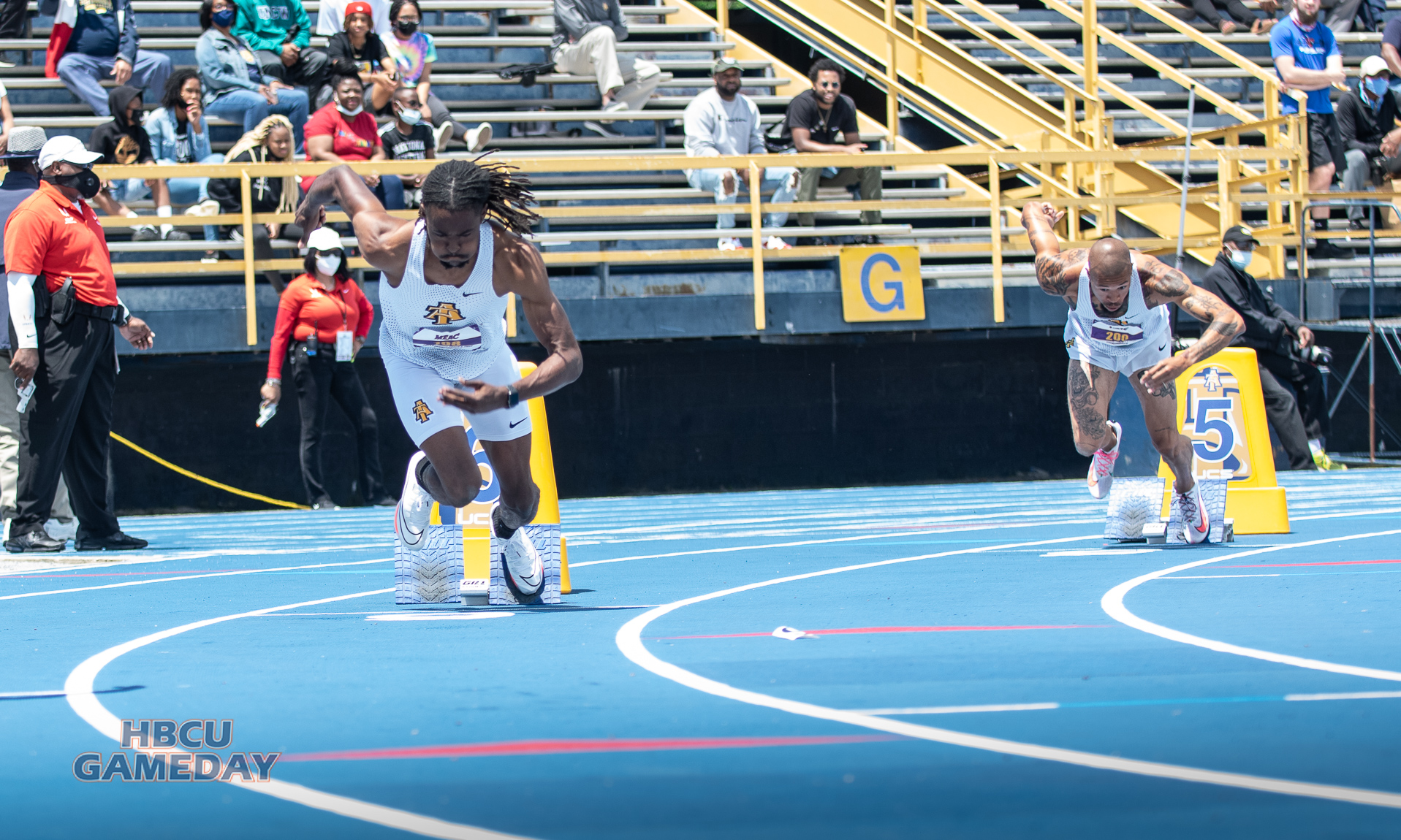 EAST GREENSBORO – Ricky Bobby says, “If you’re not first, you’re last.” We probably should not base our life’s philosophy on a fictional character created by Will Ferrell.

Even though they arrived at A&T via two different paths, their journey together eventually brought them to Tokyo, Japan, where they are now both gold medalists. Stewart also walked away from the 2020 Olympics with a bronze. Before it is over, they both could be historical figures in track and field.

They are already legendary student-athletes at A&T.

Let’s begin our tale in the mid-2010s in the state of Virginia. Two track and field high school superstar brothers Josephus and Noah Lyles become two of the most highly-recruited athletes in the country out of Virginia and throughout the nation. So when Ross attends meets in Virginia, there is no question that all the eyeballs gravitate to the Lyles brothers.

As each meet concluded, Ross’ attention heads elsewhere, however. He turns to the young man who is not finishing first all the time. At a regional meet in Virginia, Ross noticed something.

“He didn’t win the race, and he wasn’t the best 400-meter runner in that state as a matter of fact,” Ross said. “I just saw a lot of determination and potential in him.”
When Stewart crossed the finish line at the regional meet, Ross recognized how unhappy Stewart was with his finishing time.

“He came back later and ran the 200 meters and looked at how determined he was in the effort he gave.”
Then the epiphany came for Ross. Dajuan Harding, the Aggies lead 400m runner at the time, was going into his junior season. Ross would soon need a lead 400m man to replace him, and he had his sights on Stewart.

“Once Trevor decided he was coming here, he never deviated from that,” Ross recalled. “I looked at Trevor and said, ‘This will be someone good to build this 400-meter group around.’

“People talk about Randolph Ross, but make no mistake, Trevor was the foundation for those national championship 4×4 teams.”

Stewart arrived in AggieLand in 2016 and sat out his first season. He won his first race as an Aggie at the Clemson Orange & Purple Invitational by running 47.05 in the 400m indoor. He would win 27 more races (13 outdoor, 15 indoor).

A Chip Off The Old Block

His name was Randolph Ross, Jr. His father is Duane Ross is a former United States indoor champion (60-meter hurdles), a former NCAA indoor and outdoor champion (55mh, 110mh) and a former Olympian. More relevant at the time is, Duane Ross is the headman for all six track programs at A&T.

In high school, Ross Jr. is a high jumper, a long jumper and a sprinter. He wins the first of his six North Carolina High School Athletic Association (NCHSAA) indoor
or outdoor track and field titles as a junior on Feb. 10, 2018, with a 6-foot, 10-inch mark in the indoor high jump.

He also won the New Balance Nationals high school outdoor championship in the 400 as a senior on N.C. A&T’s Irwin Belk Track in 46.80. Some of his state championships also came at Irwin Belk.

Throughout his high school career, during visits to A&T with his father, he met Stewart. On occasion, Ross would let his prep star son run with his star 400m runner. The results?

“Trevor would give him the business,” said Ross, Sr.

Despite his age, Ross Jr. knew if he wanted to achieve his goals in track and field, at some point, he had to get on Stewart’s level. During the 2019 outdoor season, Ross Jr.’s senior year at Garner Magnet High School, Stewart had collected the 400m title at the Mid-Eastern Athletic Conference (MEAC) outdoor championships. In addition, he had the fastest 400m qualifying time at the NCAA Division I East Preliminary Round, and he went on to finish second in the nation in the 400m by a lean.

A&T has Trevor, they don’t

Meanwhile, Ross Jr. received interest from major SEC track and field programs. Those schools possessed a lot of excellent facilities and amenities, but none of them had Trevor Stewart.

“Trevor, I recruited. I did not recruit my son. “He grew up around A&T and grew to love it,” said Ross, who took over the A&T program when his son was 11 years old. “Of course, I am his father, so that played a role too. But Trevor had a lot to do with Junior coming here.”

Initially, Ross was unsure if his son would attend A&T. He decided not to play a significant role in his son’s recruitment. He did not take any recruiting visits with his son because he did not want to make it uncomfortable for competing schools. Instead, Ross told them to recruit his son as if he did not exist when coaches called.

“I did make some recommendations for him,” said Ross. “If he weren’t going to be at A&T, I would tell him this might be a good situation for you, or this situation might be good. But in the end, it was his decision, and hopefully, he still feels like he made the right decision.”

Ross Jr. became an official Aggie in 2019. In his short time at the largest historically black or university (HBCU), he has won three event national championships (indoor 4×400, outdoor 4×400, 400m). During the 2020 indoor season, Ross Jr. ran the fastest 400m indoor time in the world. A year later, he ran the fastest outdoor 400m time in the world.

Perhaps, he did make the right decision.

“Ever since I’ve been at this school, it’s been one blessing after the next,” said Ross Jr. “I can’t thank the school more for what they’ve done. There has been nothing but support since Day 1.”

Stewart and Ross Jr. have pushed each other to greatness over the last five years, and that could continue.

“I feel like I’ve been a part of a family since I stepped on campus,” said Stewart, who graduated with a degree in psychology. “They’ve taken care of me, helped me grow, and helped me understand how everything works. “With (former teammates) Chris Belcher going pro, and then Kayla White going pro, it set the standard higher for me because I want to be pro. That’s what got me here along with great coaching and people like Junior pushing me along the way.”

While Stewart and Ross Jr.’s paths to A&T were different, the question from Ross remained the same. How far do you want to go in the sport of track and field? Both men told Ross they wanted to earn Olympic status.

Now, they are Olympic medalists with opportunities ahead.

“To see Trevor come away with two Olympic medals when coming out of high school, he wasn’t even the best 400-meter runner in his state that says a lot. A lot of schools overlooked him. I hope he feels proud of what he’s done because he has come so far.”
Yeah, take that, Ricky!