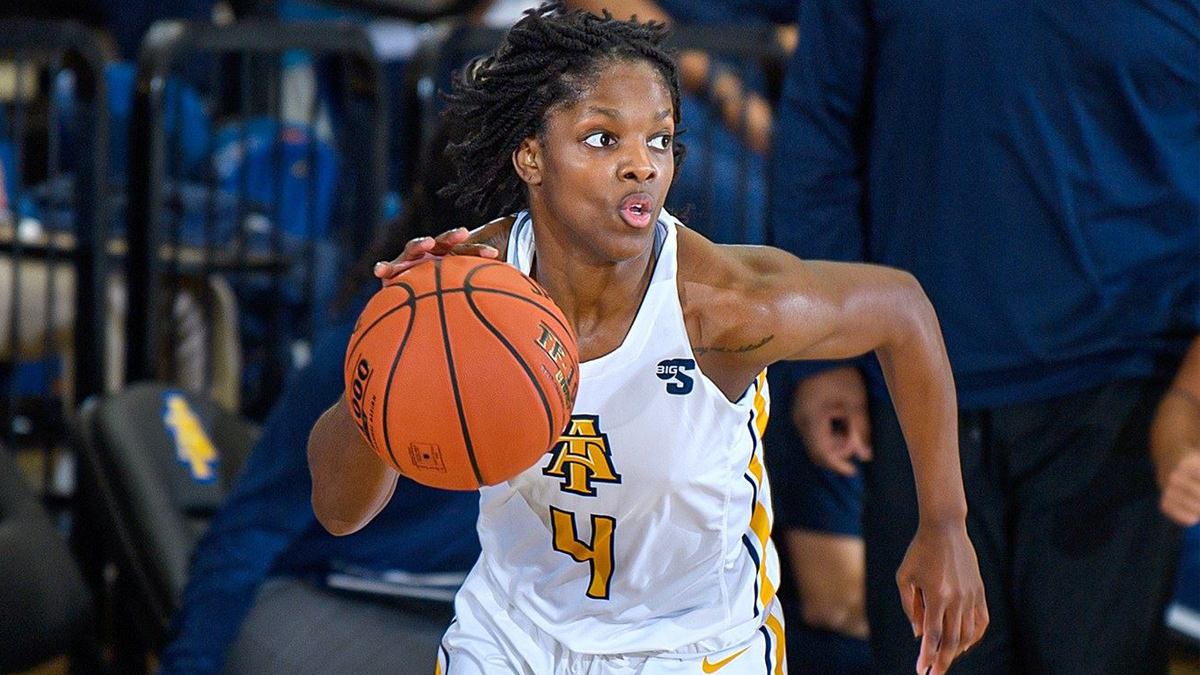 EAST GREENSBORO – North Carolina A&T came into their three-game homestand winless. However, they are walking away from it with three straight wins as they earned a 75-59 win over the East Carolina University Pirates at Corbett Sports Center Thursday night.

The Aggies improved to 3-6 after starting the season 0-6. ECU dropped to 5-6 on the season.

“Things are playing out exactly the way we hoped,” said A&T coach Tarrell Robinson. “We had a lot of adversity in the beginning, losing our first six games and losing to the No. 1 team in the country and learning from it. But then we were able to come home and defend our home court.”

Robinson’s Aggies looked impressive against an ECU team that dominated three Big South Conference opponents this season. The Pirates were also coming off a win over N.C. Central University, in which they led 27-0 after the first quarter.

The Aggies needed a fourth-quarter comeback to defeat NCCU on Saturday. They needed those types of theatrics on Thursday. The Aggies did see their eight-point halftime advantage dwindle to two points at 42-40, with 4:47 remaining in the third quarter.

The Aggies responded with a 13-2 run, and the Pirates never recovered. Jordyn Dorsey (Augusta, Ga.) started the run by taking a pass from Jasmen Walton (Baltimore, Md.) and netting a 3-pointer. Walton then found post player Jazmin Harris(McLeansville, N.C.) in the paint for an easy score. A McNeill steal and bucket increased A&T’s lead to nine before Dorsey found Kiana Adderton (Myrtle Beach, S.C.) in the paint for another easy score and a 51-40 lead.

Danae McNeal did answer for ECU with a layup, but a D’Mya Tucker (Orangeburg, S.C.) and a Chanin Scott (Charlotte, N.C.) steal and score pushed the Aggies lead to 13, 55-42. They went into the fourth quarter with a 55-44 lead. McNeill then went on a personal 7-0 to clinch the win. The run included a 3-pointer. McNeill capped the spurt with a jumper. During the fourth period, ECU was 6-for-24 from the floor, including 1-for-12 from 3-point range.

North Carolina A&T entered Thursday’s game shooting 21.5 percent from the 3-point arc but shot 7-for-13 from beyond the arc against the Pirates.

Like their NCCU game, the Pirates got off to a good start. They led the Aggies 7-0 before the Aggies closed the gap to three, 14-11, by the end of the first quarter. In the second quarter, the Aggies shot 56.3 percent (9-for-16) behind McNeill’s big outburst to take a 36-28 lead at the half.

“I’m super proud of my team for the way we survived runs and adversity,” said Robinson. “Now we’re starting to reap the benefits of all our hard work and dedication.”