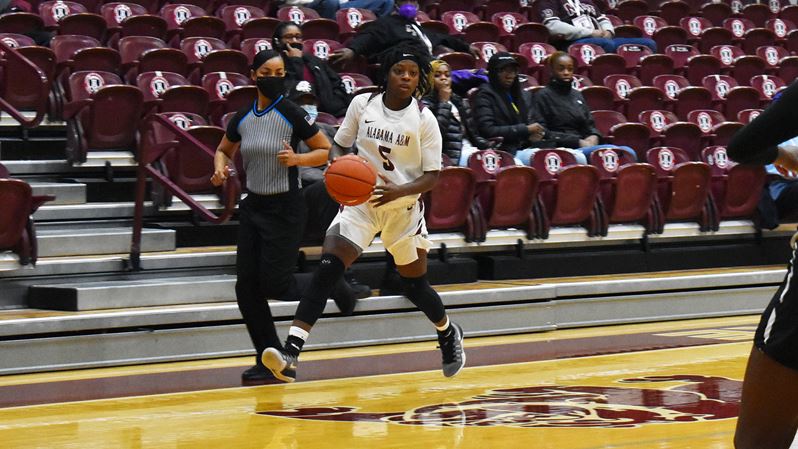 The Alabama A&M women picked up a relatively easy non-conference win on Thursday, beating Samford as it inches closer to SWAC play.

Jones exploded for a career-high 28 points on 8-of-14 shooting from the floor, including a perfect 5-of-5 from beyond the arc and 7-of-8 at the line to go along with six assists and a pair of steals. That point total surpasses her previous mark of 25 set at Jackson State on March 7, 2019.

She was joined by sophomore guard Darian Burgin(Cincinnati, Ohio) with a near double-double of 11 points and career-high tying nine boards to go with two steals. She equaled her rebounding mark set at JSU on March 4, 2021. She wasn’t the only one just shy of a double-double by a single carom as senior forward Dariauna Lewis (Omaha, Neb.) finished with 13 points, nine boards and a pair of assists.

After trading buckets to start the game, Jones would erupt for 11 straight points, including three three-pointers, to fuel a demonstrative 15-6 run in a span of 4:14. That stretch put them up 17-8 with 3:08 to play before Samford came away with a pair of layups to close to within five after the first 10 minutes of action.

A&M would pick up right where they left off, however, as they surged out to a 24-14 advantage behind a 7-2 burst in the first 3:27. From there they would maintain at least an eight-point advantage and grow their margin to 13 points on a pair of occasions, including a 35-22 halftime lead.

The Bulldogs would continue to pound away on offense to begin the second half as they scored seven straight points as part of a 9-2 run to extend to a 44-24 advantage just three minutes into the third quarter. They would once again hold serve with a 52-32 margin before SU pulled to within 16 twice before a 5-0 burst gave A&M their largest lead of the night, 59-38, heading into the final frame.

Both offenses would have an outage over the first 2:53 of the fourth as the invisible lid stayed on both baskets until Alabama A&M broke through with a pair of free throws and a layup to stretch to a 25-point advantage with 5:38 remaining. A triple by Samford’s leading scorer Andrea Cournoyer would get them on the board in the period but would do little to alter the outcome as the Bulldogs drove home the 72-47 victory minutes later.

Cournoyer fueled the Samford offense with 16 points on 7-of-15 shooting along with five steals and Sanaa Redmond came away with five points, three steals and a game-high tying six assists. Natalie Armstrong added 13 points and six caroms and Sussy Ngulefac rounded out the top performers with eight points and five boards.

The Bulldogs take on one of their toughest opponents of the season in their next outing as they head to Southeastern Conference foe Missouri. That will take place in Columbia, Missouri with a game time of 2 p.m. on Sunday, December 12.