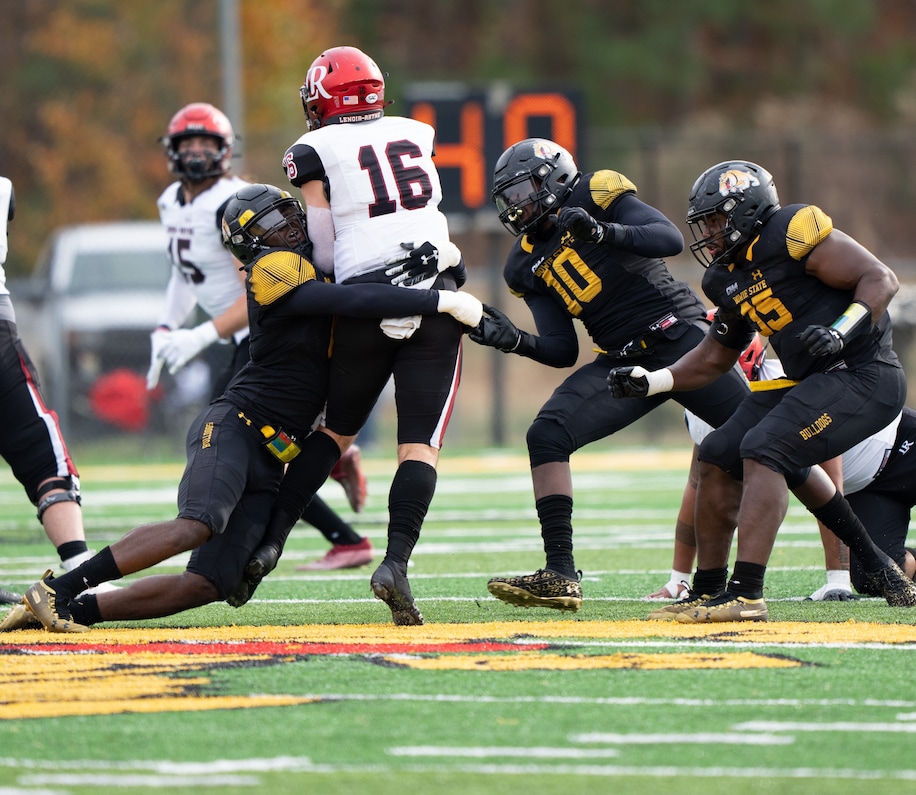 Bowie State’s defense will have a tough task slowing down or stopping Valdosta State’s offense in the NCAA Div. II Super Region II final. But the ferocious Bulldog defense is up to it. Jackson State and Prairie View A&M tangle with SWAC honors, Celebration Bowl berth on the line.

Four teams are still alive as we hit the last month – December – of the 2021 HBCU Football Rundown.

The other team still alive is CIAA champion Bowie State (12-1) who got its unprecedented second NCAA Div. II Super Region II playoff win, 13-10 Saturday over South Atlantic Conference champion Newberry. After two playoff wins at home, the Bulldogs hit the road to play at the region’s top seed Valdosta State (10-1) Saturday at 1 p.m. A win would give BSU the region championship and one of four spots in the D2 national semifinals.

This will be Bowie State’s first time in the regional finals but not the first time the Bulldogs have met Valdosta State.

In 2018, after getting a first round 41-35 win over West Alabama – the first playoff win in BSU history – the Bulldogs played at Valdosta State in the second round. Trailing only 21-16 at the half, BSU was shut out 45-0 in the second half in a 66-16 loss. That was the deepest run the Bulldogs had made in the postseason until this year. Valdosta State went on to win the Div. II championship in 2018.

BSU and Valdosta have one common opponent this season, CIAA member Virginia Union. Valdosta State put up 559 yards of offense in dismantling the Panthers 51-7 on Sept. 11. Bowie State met VUU on Oct. 23 and came away with a 27-7 victory.

Valdosta opened the season with two other HBCU opponents. The Blazers beat Savannah State of the SIAC 53-7 to open the season on Sept. 4 and defeated eventual SIAC champion Albany State 21-3 two weeks later. The 21 points against Albany State was the Blazers’ lowest scoring output of the season.

The Blazers’ only loss of the season was to West Florida, 61-42 in its final regular season game on Nov. 13. West Florida, who won the Div. II national championship in the spring, lost to Newberry – the team Bowie State beat – in the first round of the playoffs in overtime. VSU, the top seed in the region after receiving a first round bye, defeated West Georgia Saturday 66-35 in a second round game.

VSU was ranked fifth in the final AFCA Div. II national Coaches Poll while Bowie State was tenth. The Blazers are prolific on offense.

Senior wideout Gallimore Lio’undre has hauled in 51 catches for 914 yards and 13 TDs. Brian Saunds leads the VSU receivers with 60 receptions for 990 yards and four scores.

Bowie State counters with one of the stingiest defenses in the nation. The Bulldogs, who have held both playoff opponents to 10 points, give up just 139.2 passing yards per game and 12.6 points per game, both fifth in the nation. They are also stout against the run surrendering just 95.2 yards per contest. Their eight defensive touchdowns are tops in all of Div. II.

Their lightning-fast defensive attack begins up front with dynamic defensive ends Jonathan Ross (6-3, 260) and Joshua Pryor (6-4, 280), both juniors. Ross leads the team in tackles (76) and sacks (9.0) while Pryor has 66 stops and six sacks. Ross’s 26 tackles for losses totaling 103 yards is fourth in the nation. Pryor has 18.5 tackles for loss and ten other hits on quarterbacks. Fireplug nose tackle Ellison Jordan (6-1, 340) anchors the middle.

Ross was named on Thursday as the Super Region II Defensive Player of the Year.

The Bulldogs are just as dynamic in the middle and on the back end. Linebacker Wesley Bowers chips in 53 tackles and two sacks. Defensive back Myles Woolfolk (6-0, 205) is the team’s second leading tackler (67 tackles). Raymond Boone and Tevin Singleton lead the team with three picks each.

The game will be available to watch online at the Valdosta State athletics website (https://vsu-football.flywheelsites.com).

Jackson State head coach Deion “Coach Prime” Sanders told anyone who would listen back in the spring ‘you’d better get me now,’ saying he had some ‘dogs’ coming this fall that would make his team hard to beat. He told the truth.

His 10-1 Tigers rolled through the SWAC, though they were challenged, and came away with a 7-0 mark that gave them the East Division title and championship game berth.

His son, quarterback Shedeur Sanders, was brilliant in his freshman season. He threw for nearly 3,000 yards (2,971) and for 28 TDs with just five interceptions. His 68.7 completion percentage and 160.7 efficiency rating were tops in the conference. He was clearly the best and top offensive player in the conference. Coach Prime has justifiably complained that he was more than the Freshman of the Year (the award he won).

The JSU defense was just as impressive. Led by linebackers Aubrey Miller (91 tackles) and Keonte Hampton (68 stops) and menacing defensive end James Houston (59 tackles, 14.5 sacks) and 6-3, 290-pound tackle Antwan Owens, it only surrenders 13.8 points per game. That number is fourth best in the FCS.

Don’t count out the Panthers

Jackson State, playing at home, will come in as a heavy favorite. But don’t count out the Panthers.

Junior safety Drake Cheatum, a first team all-SWAC selection, was fifth in the league in tackles (82 stops) and first in interceptions (5). Senior linebacker Tre’Shaud Smith was just behind Cheatum with 78 tackles.