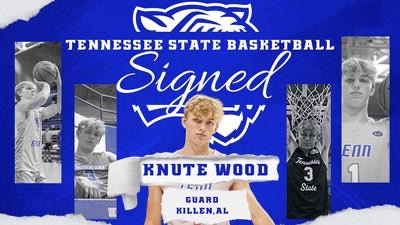 Tennessee State used the early signing period to lock down the services of Knute Wood, one of the top players in the state of Alabama.

NASHVILLE – The Tennessee State men’s basketball team took advantage of the November signing window as they secured a Letter of Intent from Knute Wood. Wood, a 6’4″ point guard from Brooks High School in Killen, Ala., is a two-sport athlete who brings intelligence, grittiness and physicality to the court.

“Knute’s a high-IQ, high-level player…” head coach Penny Collins said when asked about the future Tiger, “…He’s bringing that toughness to the table. He’s just an unbelievable kid as a person, somebody you like to be around. We like bringing high-level, high-character people to our program and Knute checks every box of the type of people we want inside our program.”

Wood, the No. 6 prospect in the state of Alabama, has guided Brooks to consecutive Final Four appearances. The 2022-23 freshman prospect was named First Team All-State after he dished out 165 assists last season, second-best in Alabama. On the gridiron, Wood currently leads the state in receiving yards and receiving touchdowns (18) as Brooks is undefeated for the first time in 15 years.

Coach Penny and his staff, specifically Coach Russ Willemsen, made a significant impact in the recruitment of Wood. The recruit mentioned how Tennessee State felt like “home” as Coach Willemsen stayed in touch with the Alabama native and attended several football games.

“Coach Russ came to a lot of my games, stayed in touch with me almost every day…” Wood said, “…just showing that love consistently is what mainly stood out.”

When asked what he liked about TSU, Wood said: “(The coaches) showed nothing but love, showed me what home would feel like… I just see a bright future at Tennessee State and I’m loving what they have going there.”

“Coach Penny, I love what he’s building. He’s made me believe in the process and what we can do at Tennessee State – compete for a national title and that’s what I want to be a part of.”

Coach Collins noted the first time they witnessed the guard was after he earned MVP of the AAU National Championships held in Las Vegas, Nevada. After Wood attended Elite Camp at TSU, the coaching staff “fell in love with him.”

“Whenever you can get a guard, 6’4″, strong, football mindset with a high-IQ on the court – can’t pass up on a kid like that.” Coach Collins said.

When asked about his skill set, Wood said: “Being gritty on the court, that’s one of my factors. Being a floor general, bringing toughness on defense and making my teammates around me better. I like to distribute the ball, I can score when I want to – but I’m a pass-first, get-the-team-involved (type of player). I believe when the team gets involved, it’ll come to me.”

Wood has played in high-level AAU basketball tournaments throughout the country with the Nike EYBL Alabama Fusion and Alabama Celtics. He excels in the classroom as well as he is a member of the National Honor Society.