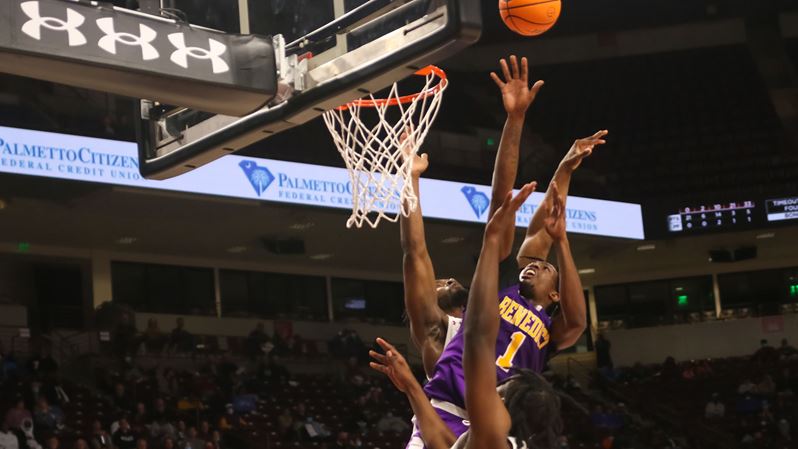 Benedict College took the floor against South Carolina of the SEC and showed some flashes of the high-paced offense it wants to run this season.

COLUMBIA, S.C. – The Benedict College men’s basketball team lost by 25 points to the University of South Carolina on Thursday night in an exhibition game at the Colonial Life Arena, and head coach Artis Maddox was all smiles after the game.

The Gamecocks won 101-76, but the Tigers showed flashes of brilliance, including an exciting 8-2 run in the first half when they were able to score on easy transition layups and dunks. He hopes that is an omen of good things to come for the Tigers this season. For the game, Benedict had 18 fast-break points, compared to 15 for the Gamecocks.

“We get up and down. We try to push the ball. We want to try to average 95 to 100 points a game,” Maddox said. “To do that, you’ve got to have a lot of possessions. You’ve got to be in shape. Obviously, we’re not in the best of shape. We’ve got to get back in shape. But that was the plan. We knew they were big, strong and athletic. We just wanted to try and get out and run every chance we got. We got a chance to get some easy layups and dunks. We’ve got to build on it and we’ve got to be able to make some outside shots, too.”

And Maddox was happy about the big crowd in the large arena, including a large contingent of Benedict fans. After last season’s limited 10-game schedule with no fans, Maddox was excited to see people in the stands again.

“It’s good to have fans back in the bleachers again,” Maddox said. “Last year we played 10 games with no fans. It felt good to have a crowd. I really enjoyed the atmosphere. Our fans were here, they showed up giving us support. And South Carolina fans were obviously here showing support.”

Benedict trailed 21-18 in the first half before the Gamecocks pushed the lead to 36-24. The Tigers used their speed to get some easy transition baskets, including a crowd-pleasing dunk by Marshaun West, to make it 47-36. The Gamecocks had a 54-39 lead at the half.

In the second half, USC’s tough defense held the Tigers to 25 percent shooting. The taller Gamecocks outrebounded Benedict 49-36.

Maddox said playing competition the caliber of the Gamecocks will help the Tigers prepare for the season.

“Hopefully, we won’t see teams this big and this athletic during the season. I’m glad this one is over with,” Maddox said. “Our ultimate goal is to win the conference and win the national championship. Playing against teams like South Carolina, who are big and athletic and strong and very disciplined on defense, this will help prepare us for that. This is a building process, and we look forward to our next game Nov. 12 down in Orlando. They will not be this big and not be this athletic, so I’m looking forward to that.”

Benedict opens the regular season on Nov. 12 against Rollins College in Winter Park, Fla. at 2 p.m. The home opener will be Nov. 16 against Shaw at 7:30 p.m.