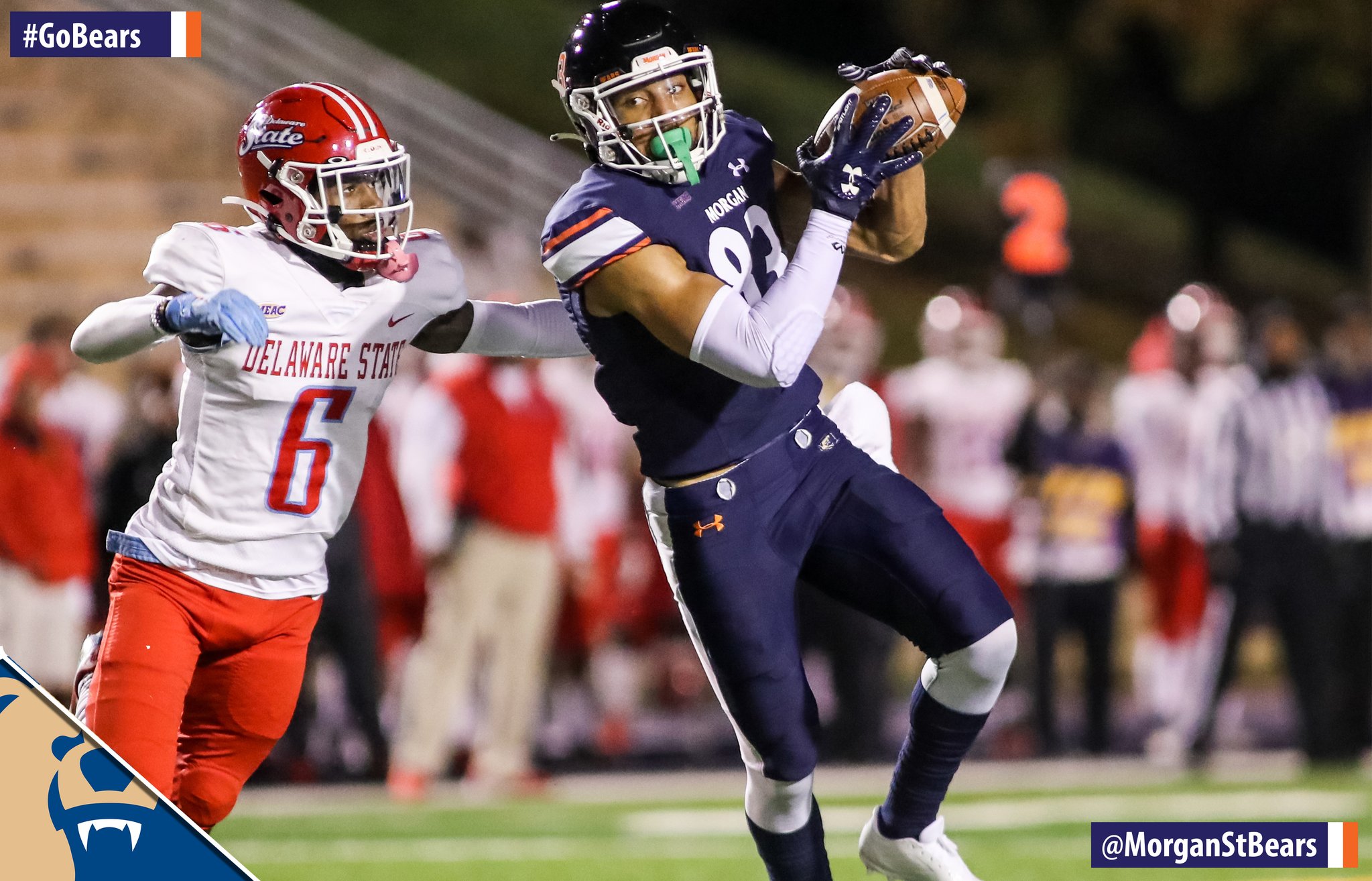 Morgan State grabbed the lead against Delaware State early, let it back in the game and then closed the door late to secure the first win of the season.

The victory marked the Bears ninth straight against Delaware State since 2010 and improved Morgan’s all-time record to 38-37 against the Hornets.

Romello Kimbrough broke a tackle and raced 21-yards for a touchdown midway through the third quarter to put Morgan ahead 20-7, and the Bears (1-8, 1-4) held on by making a key stop in their own territory in the fourth quarter when the Hornets (4-5, 1-2) were within one TD.

Morgan State quarterback Neil Boudreau connected with Marcus Thomas for a 72-yard TD to open up scoring during the Bears’ first drive of the ballgame. The extra point attempt by KC Akubuo bounced off the upright no good. The Bears held an early 6-0 lead with 11:29 remaining in the first quarter.

The Bears lit up the scoreboard on its very next possession when Boudreau handed off to Alfonzo Grahamwho evaded a group of Hornet defenders at the line of scrimmage and raced 70-yards to paydirt. The Bears led 13-0 within the first six minutes of the game.

Graham’s TD run was the longest by a Morgan player since Nov. 10, 2018 when Josh Chase scored on a 75-yard TD run versus Delaware State.

DSU began moving the chains from its own 15 toward the end of the quarter behind a heavy dose of running back Michael Chris-Ike. Chris-Ike had seven carries and scored on a 1-yard run to cap a 15-play, 85 yard drive that consumed almost 7 minutes. The Hornets trailed 13-7 with 2:52 remaining in the first quarter.

The Hornets made it interesting midway through the fourth quarter when quarerback Jared Lewis hit wideout Trey Gross in the middle of the field for a 39-yard TD. The Bears lead was trimmed to 20-14.

The Bears went three-and-out on their next possession and a 48-yard punt by Boudreau gave DSU the ball on their own 25 with 4:48 left to go.

The Hornets had a prime opportunity to take tie the score when Lewis dropped back and found wideout Jerrish Halsey streaking down the sideline behind the defense. The pass was on target, but Halsey dropped the pass. The Hornets ended up driving to a 4th and 8 from the Bears’ 12 and Darrius Outlaw pressured Lewis into throwing an incomplete pass. It was the last gasp for DSU as the Bears collected their first win of the season.

Morgan out-gained the Hornets in total offense by a 378-313 margin.

Morgan coach Tyrone Wheatley spoke about his team after the victory.

“These young men are incredible and continue to fight,” said Wheatley. “Week after week they continue to get better. They didn’t make any excuses.”

“It feels good to get this for them and to get the pendulum moving in the right direction. As we end out, November football is probably the most important month whether you’re winning or losing. Because if you’re winning, it’s how you progress into the playoffs, and if you’re a team like us, you’re trying to find your way and seeing the character of who you are and what you want to become in the future.”

“These young men are a tough bunch… a tough group.”

The Bears will travel north to face the University of Albany Great Danes on Saturday, Nov. 13. Kickoff is slated for 1 p.m. at Bob Ford Field at Tom & Mary Casey Stadium.