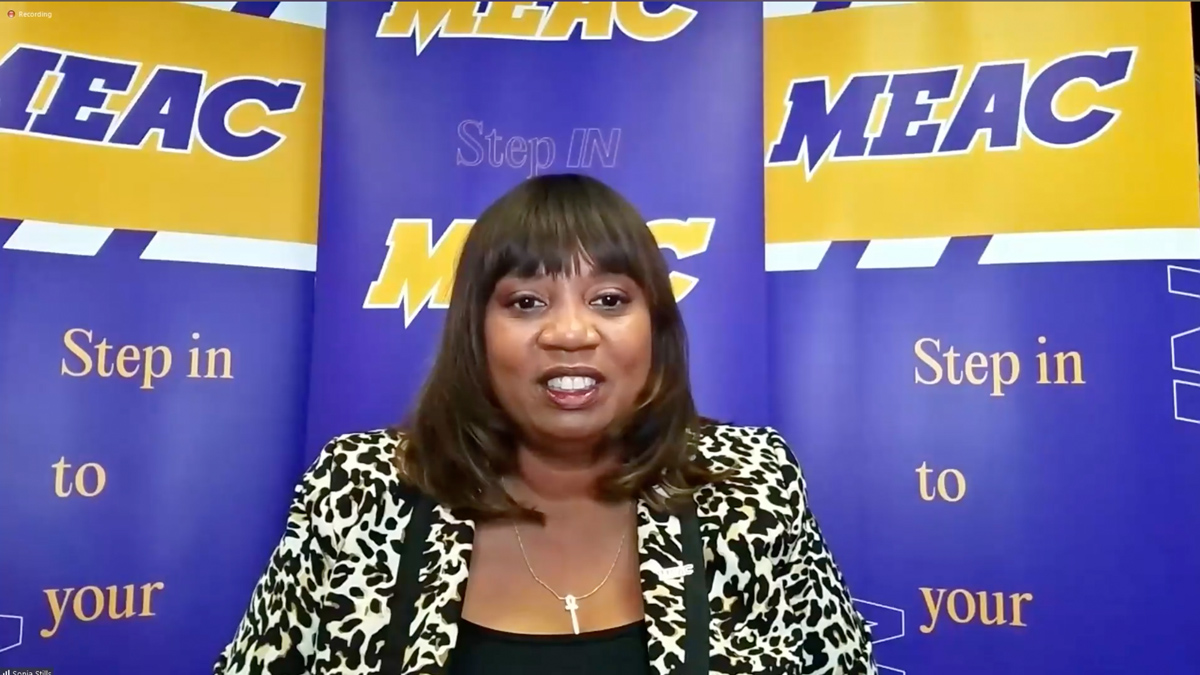 MEAC Commissioner Elect Sonja Stills is pushing academics along with athletics as the conference looks to maintain and grow new membership.

If the debut media session for newly-elected MEAC Commissioner Sonja Stills is any indication of the future, get prepared for a new pseudo-slogan for the league: The Elite Eight.

The long-time MEAC employee and assistant to outgoing commissioner Dr. Dennis Thomas stepped out into the limelight and attempted to frame the conference as an academic and athletic powerhouse. Ascending to the position with the green light from the conference’s presidents and chancellors, she sees telling that story as a vital part of that mission — as well as maintaining membership in the conference.

‘When you have the Presidents and Chancellors who are invested in the sustainability of the conference — that’s extremely important,” she told the media on Thursday. “So having that support is going to help with the sustainability of the conference and that’s what’s most important. Finding ways for our members to see the value in staying in the MEAC. ‘

Stills went on to list some of the academic accomplishments of the current MEAC members that have the league feeling confident about referring to itself as “The Elite Eight.” Delaware State, Coppin State, Morgan State, Maryland-Eastern Shore, Howard, Norfolk State, North Carolina Central and South Carolina State are the current members of the conference.

“The conference is so rich academically as well as athletically and so it’s extremely important to tell that story that makes us attractive to other members. That when you come into the conference, you’re not going down,” she said. “We’re looking for members who are going to help accentuate the academic excellence that we have with our Elite Eight and I call them the Elite Eight because we have very strong members who are committed to the MEAC and its sustainability.”

Of course, that sustainability has been questioned due to the loss of six schools since 2009: Bethune-Cookman, Florida A&M, North Carolina A&T, Hampton University, Savannah State and Winston-Salem State.

“So now it’s about sharing that vision that we have for the conference and that transparency with our membership and with our fans and our alumni so that they can see where we are going as a conference and get that buy-in with them as well.”

But one of the biggest — if not the greatest — challenges Stills and the MEAC face is making sure that the “Elite Eight” don’t turn into the Select Seven.

Appointing someone who was around for many of the losses has garnered some pushback in many circles, but Stills sees her experience as an asset moving forward.

“I say the best thing about and I guess my leg up is I’m grounded in the MEAC. I’ve lived it, I understand it. My whole career is in the MEAC, so I know where the challenges are,” Stills said.

“I know what changes need to be made. And just having that latitude to do that, having the support of the membership to move the conference forward, that again, like I said, the shared vision for where we want to go, who is our identity now as the Elite Eight is extremely important to to be able to shape where we going in the future.

Many would like that future to include expansion. Stills says that is in the plan, but fit is the key.

“They have to align with us academically, athletically, budget-wise — it has to make sense. We need to make sure that it fits in our footprint. We’re going to be looking at ways we can do that with the strategic and long-range plan of really taking a good look at who would be a good fit for us.”